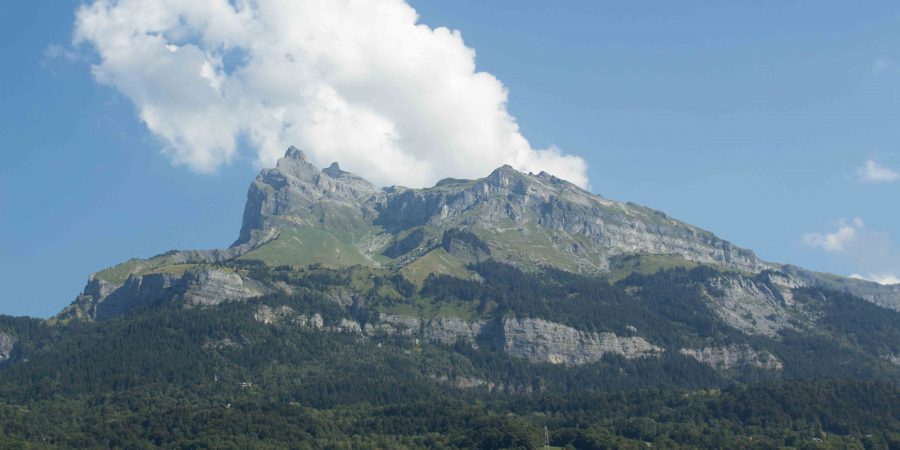 In the midst of a history-laden trip, we tried to balance out the intellectual stimulation and big cities with small towns and active, nature-oriented fun! Enter: Chamonix. 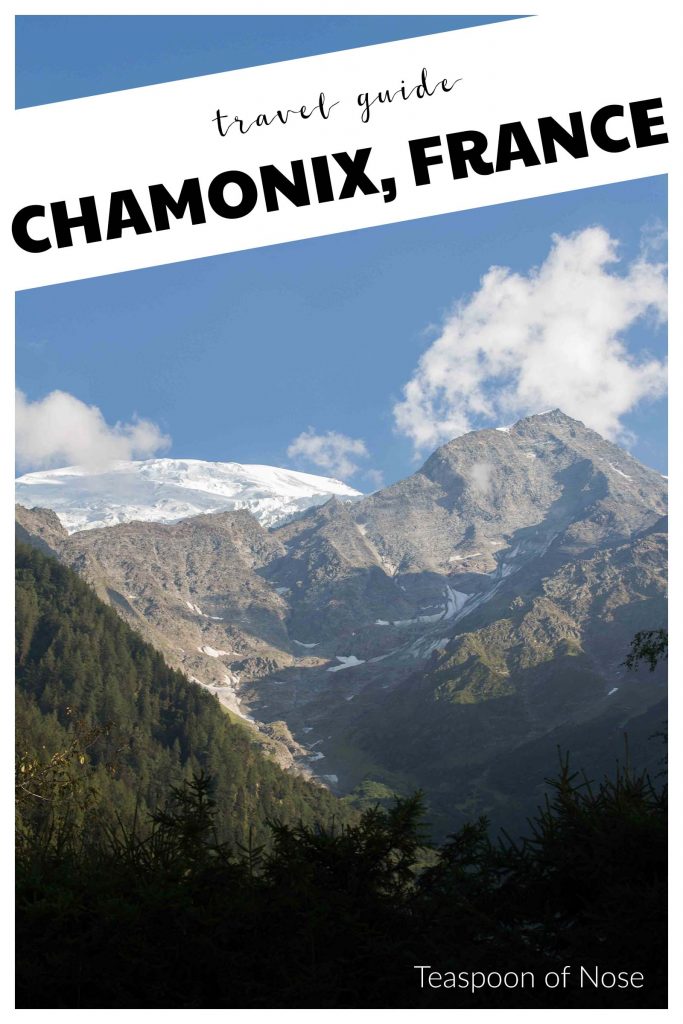 Chamonix is largely a sleepy little ski town, giving it a bit of an alpine resort feel. For some reason, I adore ski towns in the off season. They’re always cute! I love seeing them snow- and tourist-free. Anybody with me on this? 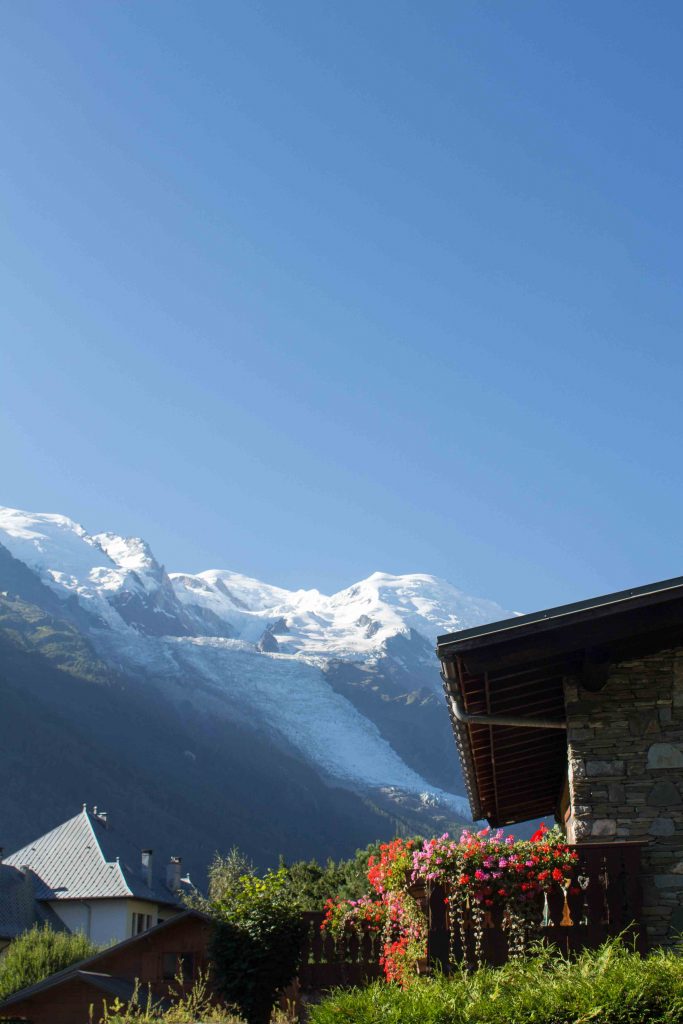 We went to Chamonix with an agenda: paragliding. It was one of the most ridiculously amazing things I’ve ever done! We flew. Flew. Along the Alps. It’s a truly unbelievable experience, and I highly recommend it even if adrenaline sports aren’t your deal.

Culturally, Chamonix offered a different taste of France: being so close to Switzerland meant there was as much Swiss influence on the town as French. It’s nestled into a valley between two mountains. On one side are the craggy, snow-capped rocks so characteristic of the Alps, frozen even in the hottest point of the year. On the other side stands the more rolling, graceful variety, with snow in winter but now crisscrossed with pine trees and hiking trails. The sun set quickly behind the mountains, casting everything in a gorgeous purple golden light before disappearing. 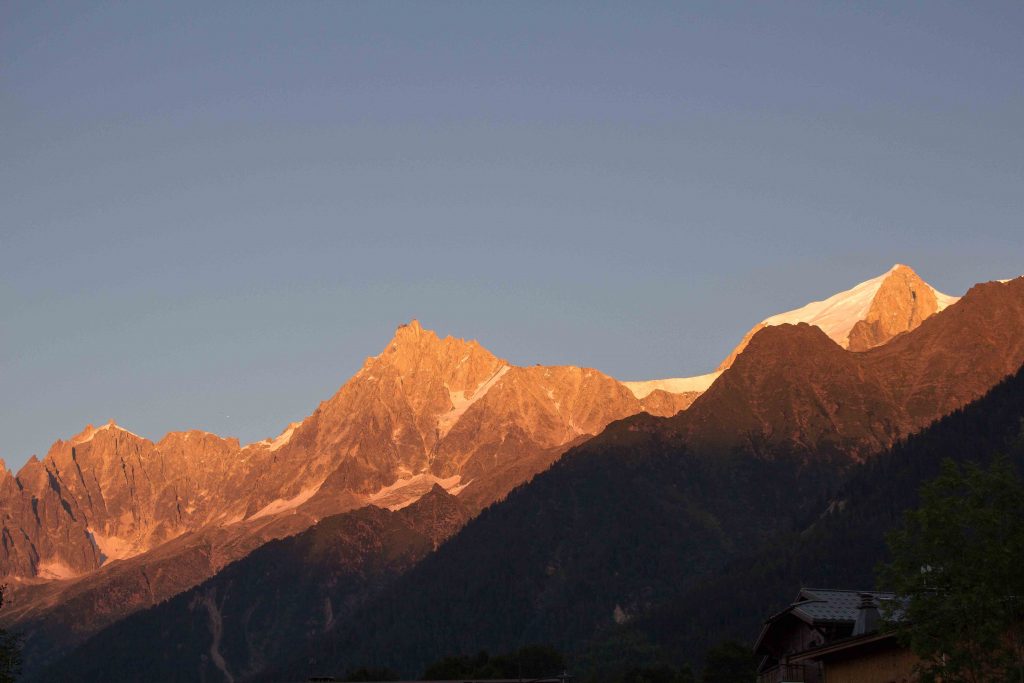 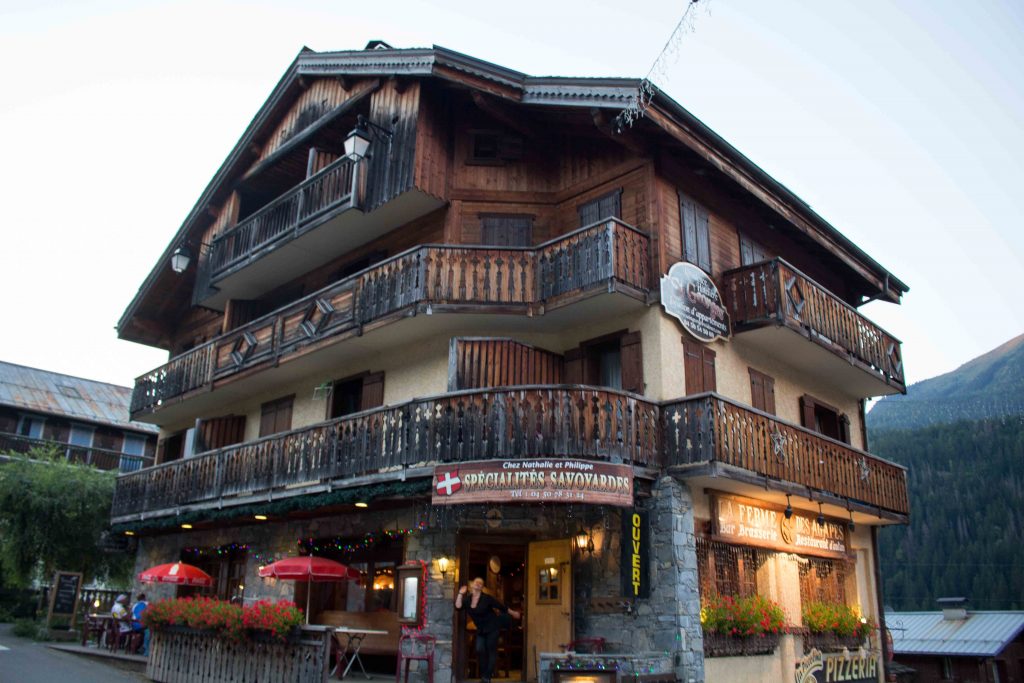 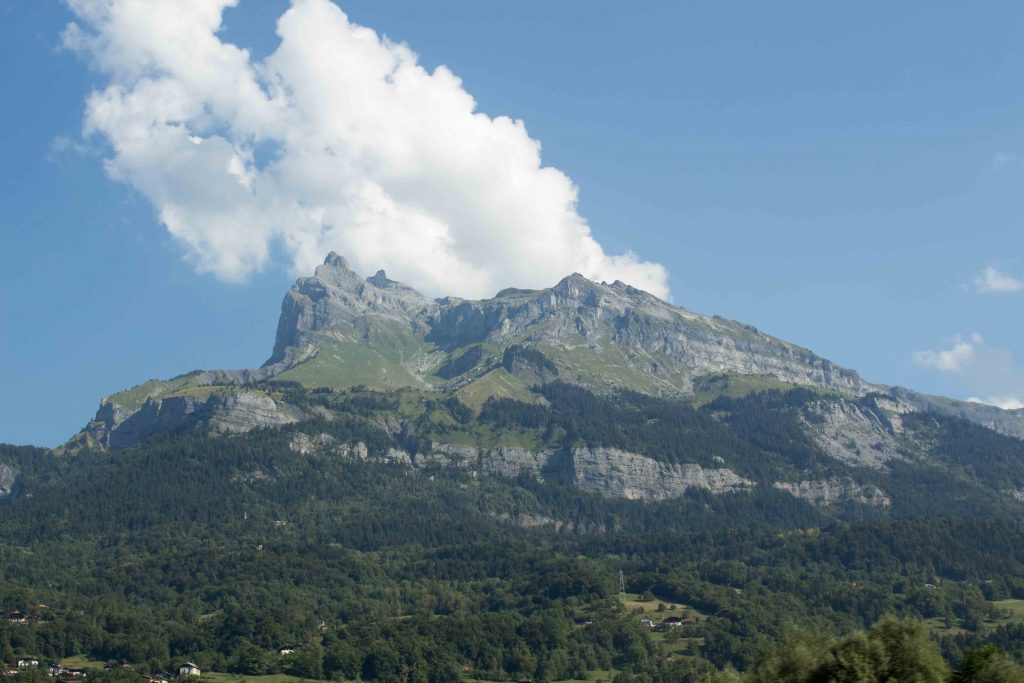 We actually stayed in the next town over, Les Houches. I had trouble finding accommodation in Chamonix proper, but Les Houches turned out to be a hidden gem! Where Chamonix strikes the ski tourism chord, Les Houches felt much more local. One main road went through everything, with small shops, a few restaurants, and a tiny chapel along it. The occasional side roads were dotted with homes and the odd inn, complete with a walking path parallel (but not quite alongside) the street.

The homes were quaint little chalets, brimming with rustic charm and wildflowers. Both evenings after dinner we meandered along paths crisscrossing the valley, soaking up the glorious sunset glow. Streams bubbled and flowers grew along log fences. It felt like the perfect place to catch your breath and let yourself decompress. 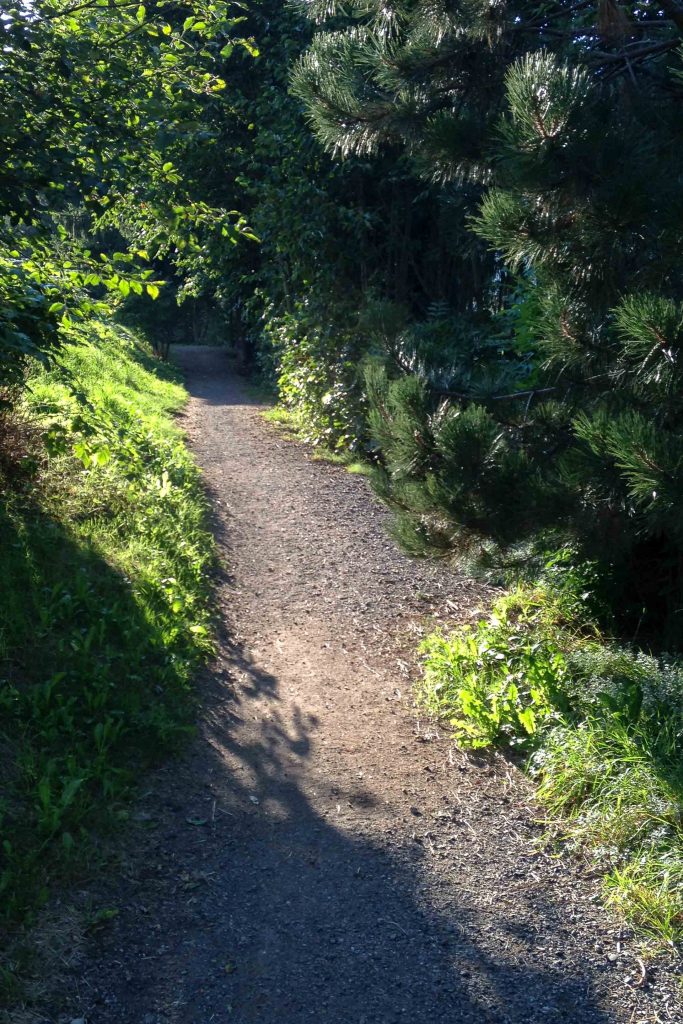 Since we spent so little time in Switzerland itself, I wanted to make sure to eat some authentic Swiss food. I was ready to hunt down some fondue, but Logan convinced me to try something a little less familiar: raclette.

If you’re like me and had never heard of this, get ready to have your world rocked. Raclette is a massive wedge of cheese on a spike that you melt on your own personal grill. As it begins to drip off, you scrape it onto your plate and eat over bread, potatoes, and thin-slice meat. Along with a salad (throwing in veggies somewhere!), it’s possibly the best form of  cheese I’ve ever eaten. And the potatoes! The potatoes were the best potatoes I’ve ever tasted. As far as carbs go, potatoes are probably my least favorite. They’re great, I agree, but not usually better than pasta or pastry. Stiff competition. But these small yellow baked potatoes were the single best potatoes I’ve ever put in my mouth. And add melty cheese? Ohhhh yes. 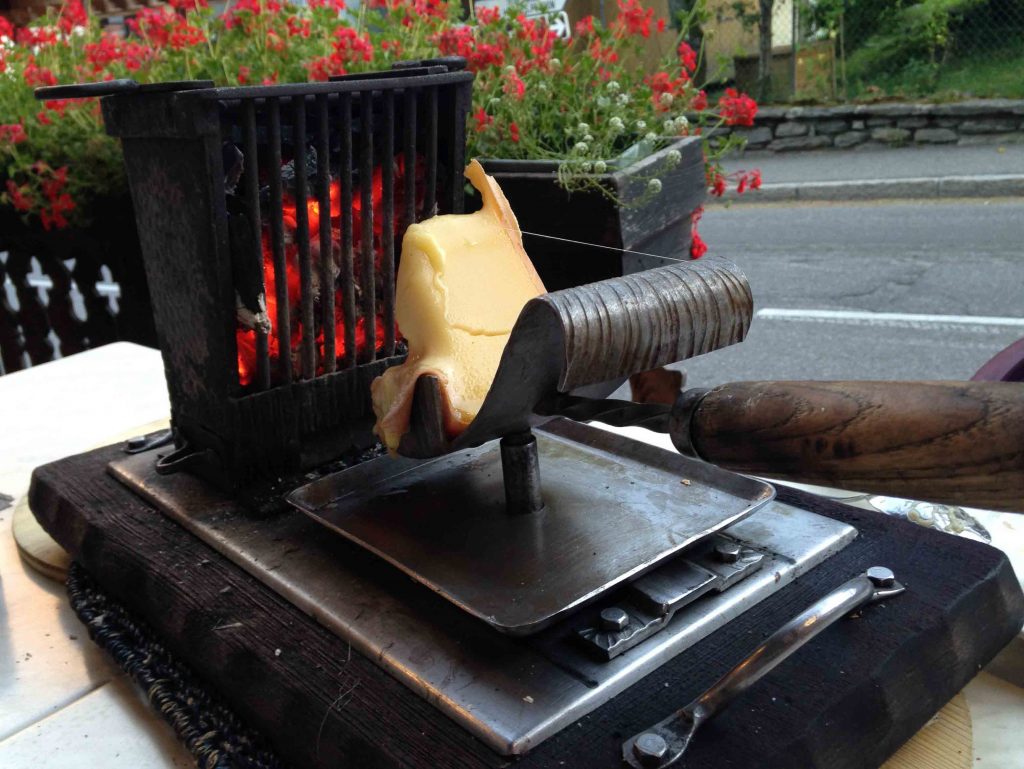 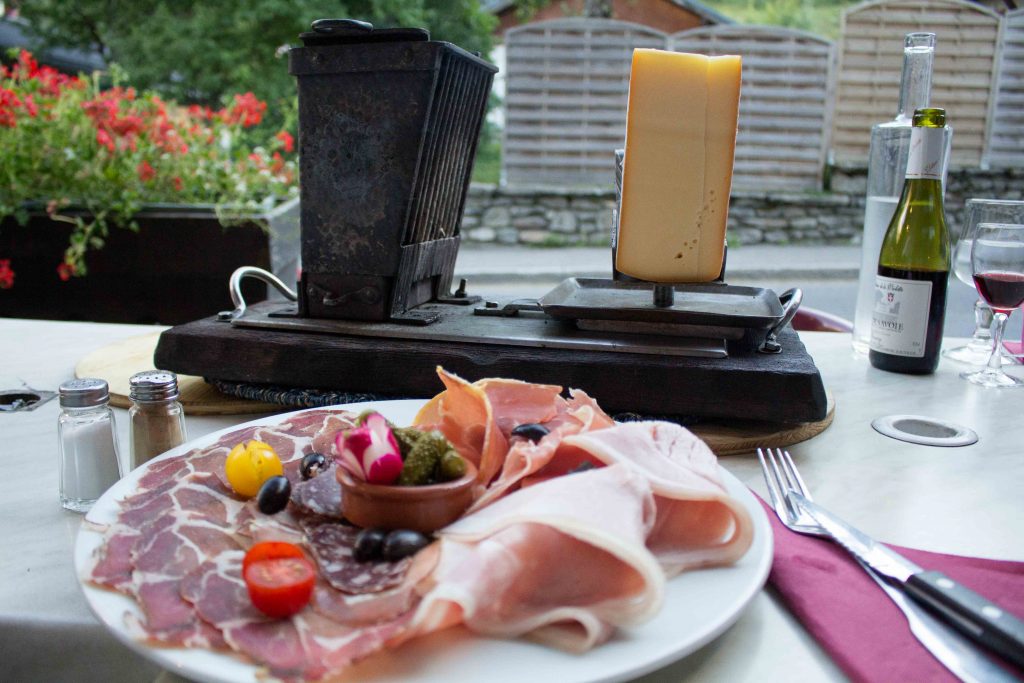 I cannot overstate this: it was heavenly. We gorged ourselves until we didn’t know if we could walk home!

If you’re in Chamonix, go to La Ferme Des Agapes. They’ve got a full menu as well as fondue, but you should DEFINITELY not skip the raclette.

I mentioned accommodation was scarce in Chamonix. That’s unusual. We’d unintentionally planned our trip for the same time as the area’s biggest tourism week of the year! The UTMB, or Ultra Trail du Mont-Blanc, is one of the biggest ultramarathons in the world. At 166 km, it climbs height after height as it winds through the Alps, crossing three national borders in the process! It’s a pretty impressive race. AND it happened to be finishing up in Chamonix while we were there.

If you’re headed to the Alps, you should definitely spend some time in Chamonix. There’s so much to do there even in the offseason!

Where are your favorite places to visit off-season?

2 thoughts on “The best of Chamonix”