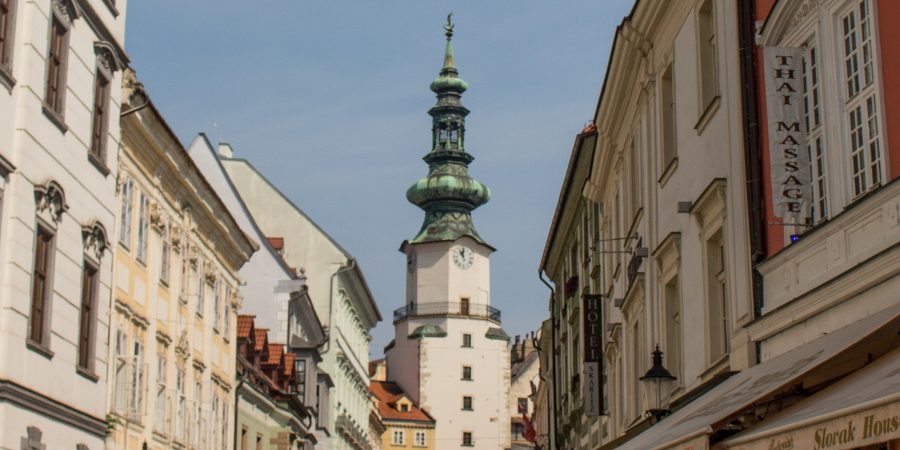 Bratislava may not be at the top of your radar for a weekend getaway, but it should be! With classic old-world elegance, a unique history a walkable old town it’s a perfect place to explore for a weekend! Today I’ll show you a few things you’ve got to see in the city.

Bratislava isn’t exactly a wellknown tourist destination – yet. Spending the weekend there, it’s easy to see how they’re on the cusp of being “discovered” by the rest of the world. The major destinations are well labeled, every waiter speaks English fluently, and there’s plenty of great options for mid-priced meals. They even have a tradition of cute or silly statutes dotted through the city, making the perfect Instagram moments for those who can spot them!

At only one hour’s drive from Vienna, it’s easy to combine with a visit there – you’ll get two countries and two capitals for the price of one! We slid over after a day in Vienna, and while I loved both, Bratislava may have scraped ahead of Vienna for its walkability and quirky, more relaxed culture while still maintaining all that beautiful architecture.

Bratislava boasts much of the same style of Baroque elegance in it’s archietecutre, albeit on a smaller scale, but with a bit more eastern influence in the cotton candy colors mixing with the classic white/gold/copper. There’s also a fair amount of Soviet-esque buildings mixed in, creating a surprising contrast between the ornate and the drab as you walk further away from the city center.

Staying in Bratislava is so reasonable. We tried out two different Airbnbs, both situated right in the Old Town, and both were less than $100/night to sleep four people booked less than two weeks in advance! If Airbnbs aren’t your thing, look for a hotel in the Old Town – you can easily find a nice hotel for under $100.

The most popular attraction is the Bratislava Castle, so you know that’s where I headed first! Located just west of Old Town, it’s easy to spot from its position high on the hill overlooking the city. It used to be the royal family home as well as hosting some form of military stronghold since the 5th century. Currently, it houses a museum detailing the history and highlights of Bratislava and Slovakia, from 1st century Celtic settlement to the seat of Hungarian kings in century to the room where the Slovak Republic signed their constitution in 1992. The history is fascinating – it’s humbling to remember just how much I don’t know about so much of the world, and the Bratislava Castle museum lays Slovak history out in an approachable way.

Beyond the content, the Bratislava merits a visit solely for the building. The inside is a history lesson of itself, from the Slavic hut in the foundation to the gold and white Baroque staircase, lined with a red carpet to create the most glamorous steps I’ve possibly ever taken. The building is also set up to allow you to get as close as possible to everything – in another country, those stairs may have been roped off, but here, they’re the main way to get up and down!

Likely the most iconic part of the city, Michael’s Gate is the last vestige of the old walls of the city. Its gorgeous copper tower works as a landmark anywhere in the old town and also houses the Museum of Arms, which we didn’t explore this trip.

Like any major European city, there are a few cathedrals and churches worth noting. The more traditional is St. Martin’s Cathedral, and you’ll likely pass it on your way to Bratislava Castle. Historically the official site for coronations, a replica of the crown sits atop the tower’s peak.

The less traditional to western eyes is worth seeing too: St. Elizabeth’s, or Modry Kostol. Known as the Blue Church, it’s exactly what it sounds like. Remember how I said Bratislava embraces color? This is a fantastic example, as is the ten minutes’ walk outside Old Town to see it. A modern building constructed in the , it has gorgeous mosaics as well inside.

One of the most fun bits of exploring Bratislava is hunting down the series of statues tucked into corners! Some, like Cumil popping out of a manhole, hard to miss and sometimes have to wait a moment for your turn to take a photo. Others, like a girl casually popping gum, are tucked away inside public courtyards that you may not walk through unless you’re on the hunt for a shortcut. So keep your eyes peeled! Pro tip: if you’re walking home at 1 in the morning after a rainstorm, there’s no line for photos. 😉

Want to see the city as a whole? Head up the to observation tower of the SNP Bridge. Known as the UFO, it gives 360° views and has a restaurant. Honestly, we skipped it – I’d rather be walking around experiencing the city, plus you can get a great view of Bratislava from the top tower of the castle!

Beyond the “things to do” list, Bratislava is one of those cities that is a pleasure to wander. I can picture myself here for a week or more of unrushed exploring. I’d sit at a different cafe every morning, turn down every street of the old town and exploring every market stall.

What about restaurants, you ask? Those are so important I dedicated an entire post to the best food finds in the city! For those that know me, this should come as no surprise. And you don’t want to miss it – from one of the best breakfasts of my life to exploring Bratislava’s speakeasy culture, I’ve got some great suggestions to share!