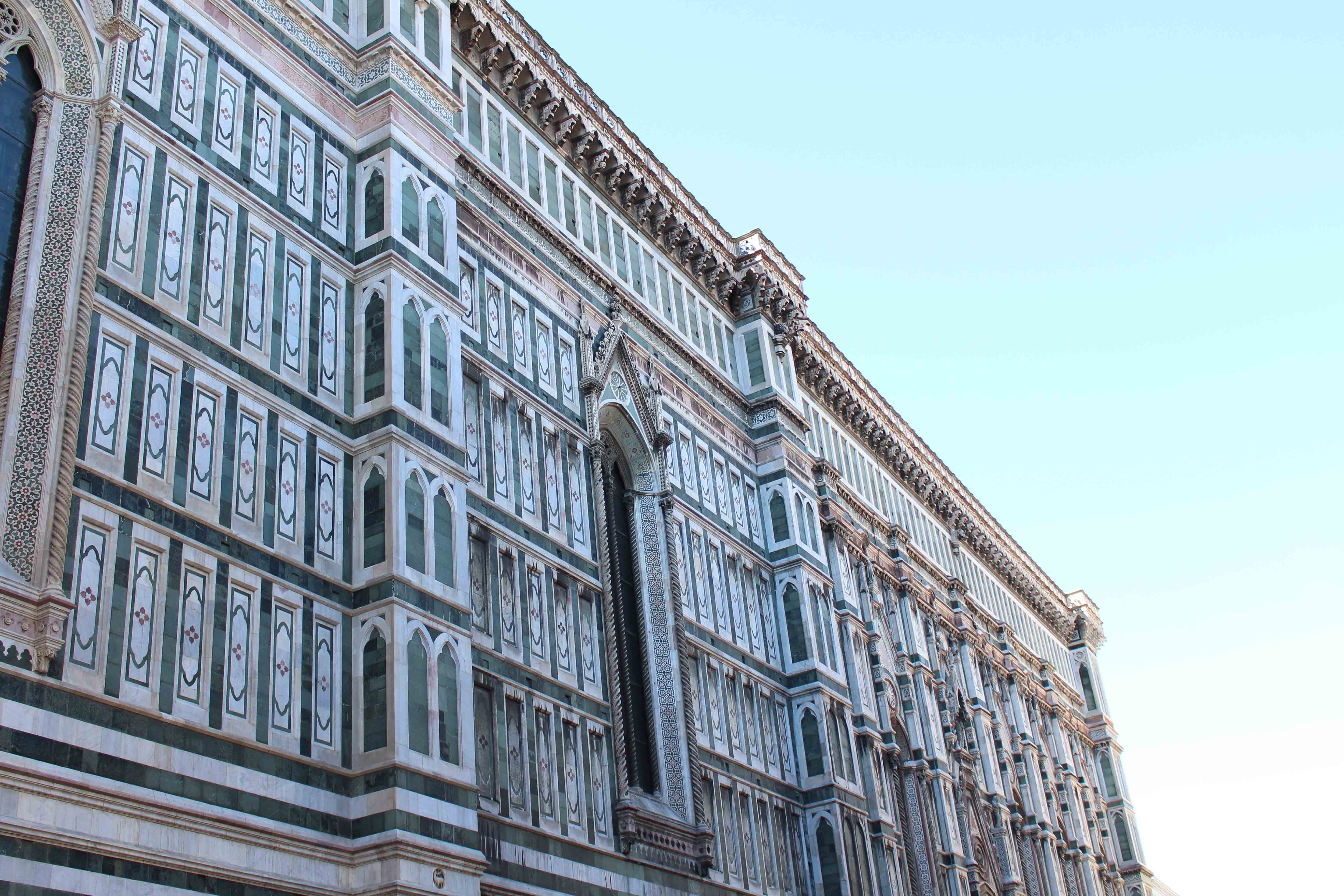 You know those places that you know will be fun or beautiful or meaningful, and then you get there and its so much more so than you thought possible?

Florence’s Duomo was that for me. 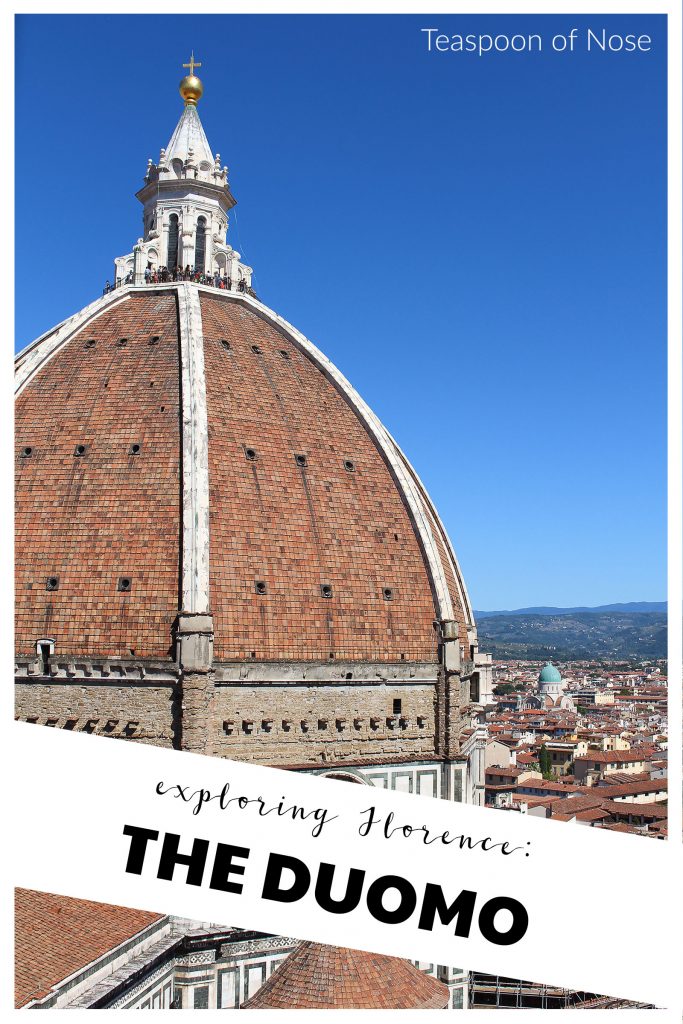 Technically the Duomo is part of the Cattedrale di Santa Maria del Fiore, or Cathedral of Saint Mary of the Flowers. The complex can be divided into roughly 4 parts: the duomo (or dome), the cathedral, the baptistry, the bell tower and the museum.

First of all, the buildings are stunning. I’d seen photos, but the green marble against the more traditional white is just so striking in real life, and takes on a myriad of shades as the sun moves across it. The orange tile roof announces its presence boldly, but somehow ties it into the surrounding city at the same time. 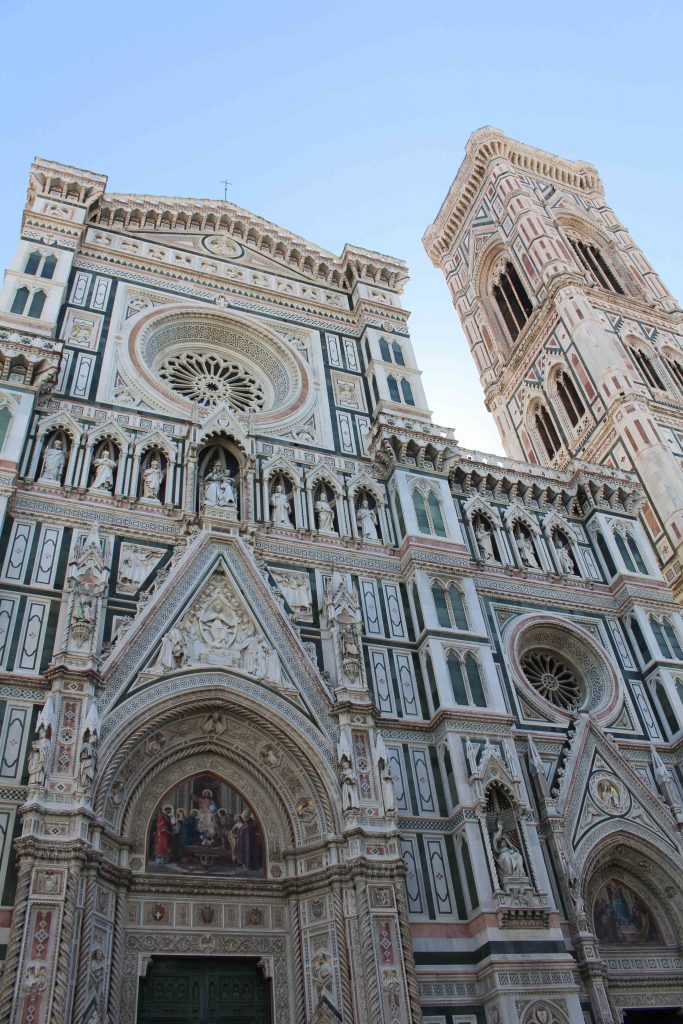 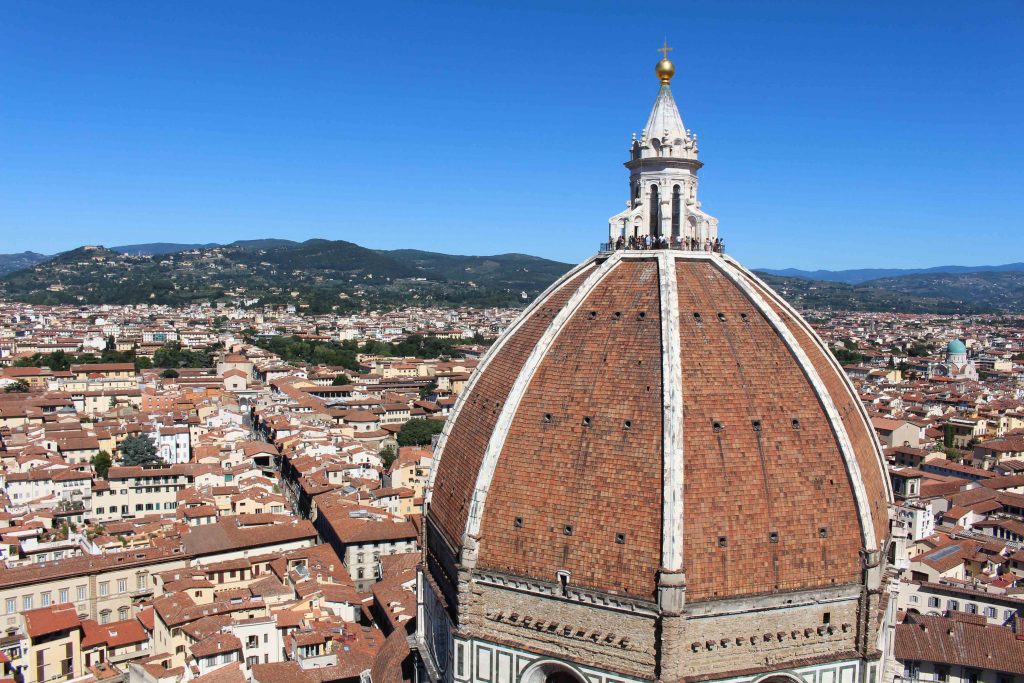 The Duomo is one of those things you definitely want to book in advance. It’s a two-part reservation – first you buy a ticket that gets into each building, then you also need to reserve entry times for the duomo, museum, and bell tower. The duomo sits atop the cathedral, but think of them as separate experiences: they’ve got separate entrances and ticket requirements. Most of the parts had two lines, one for unreserved entry and one for timed. When we walked up to the Duomo 30 minutes after it opened, the unreserved line went halfway around the building!! Yikes. Definitely reserve timed tickets. The good part is, if you get to the last thing and want to go in early, you can always just get in the untimed line. We did that for the bell tower entry in late afternoon.

Since we wanted to soak in the view before the August heat kicked in, we climbed the Duomo first. Be prepared for lines, it’s just inevitable. Even in the timed entry line, we waited 30 minutes.

We climbed the 468 steps in phases, broken by two viewing platforms of the inside of the ceiling. The frescoes are breathtakingly beautiful, airy and light and full of familiar imagery. After the first landing, the already-steep stairs become two way, so things get a little tight. If you’re not great with heights or enclosed spaces, be prepared. Clearly this wasn’t built with an eye to accommodate thousands of tourists. But to me, there’s something special about climbing the same steps that others had climbed for generations, literally following in the footsteps of so many before me. 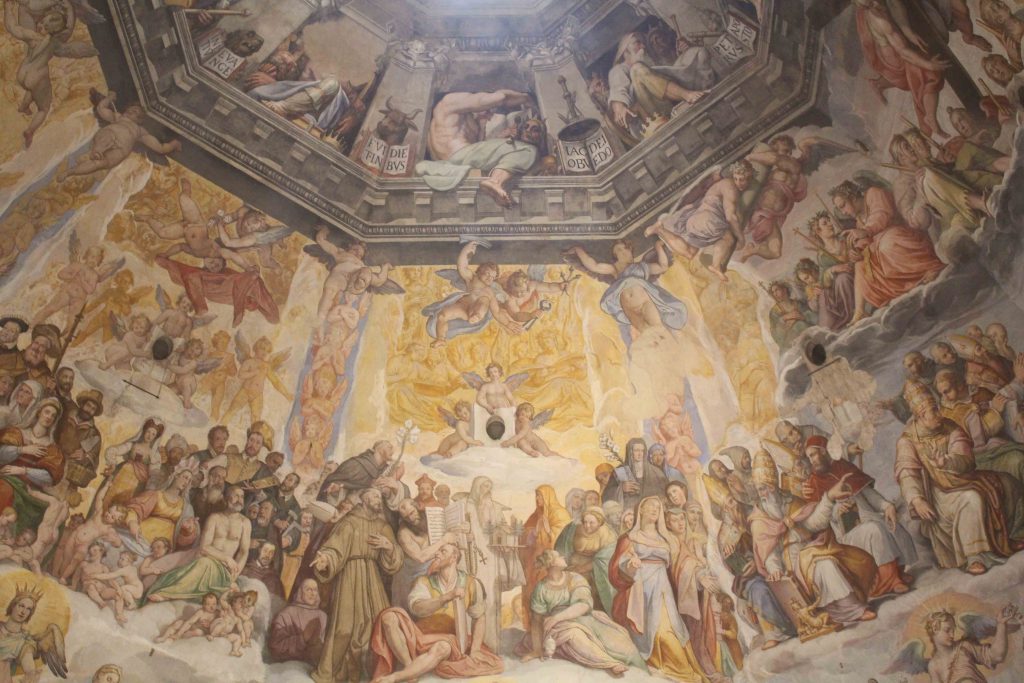 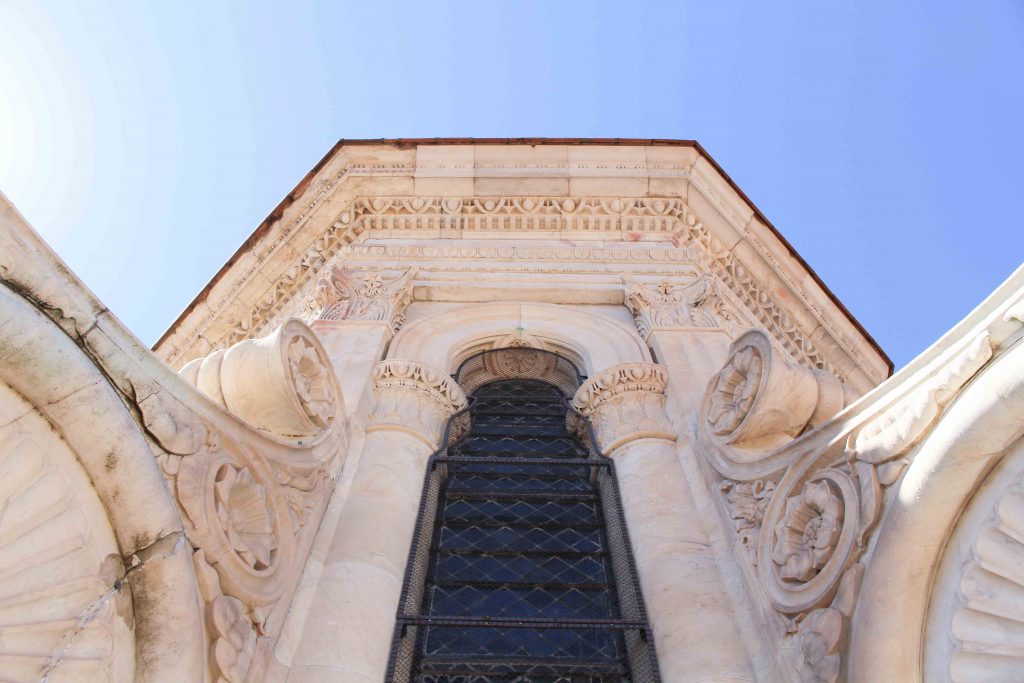 At the end of the steps there’s a ladder out to the exterior, where you can see 360° of cityscape and the countryside beyond. The orange of the roofs yielded to the greens of the rolling hills and fields going as far as the eye could see. I loved the view and could’ve stayed up there all day.

Sheer crowdedness eventually forced us back down the ladder. After stepping into the Cathedral from it’s ground floor entrance, we grabbed a quick lunch (and ran into some old friends! Don’t you love that about travel??) before heading over to Il Grande Museo Del Duomo, or the Duomo Museum. For a whole museum dedicated to only one building, it really sucked me in. And this coming from someone who knows next to nothing about architecture. 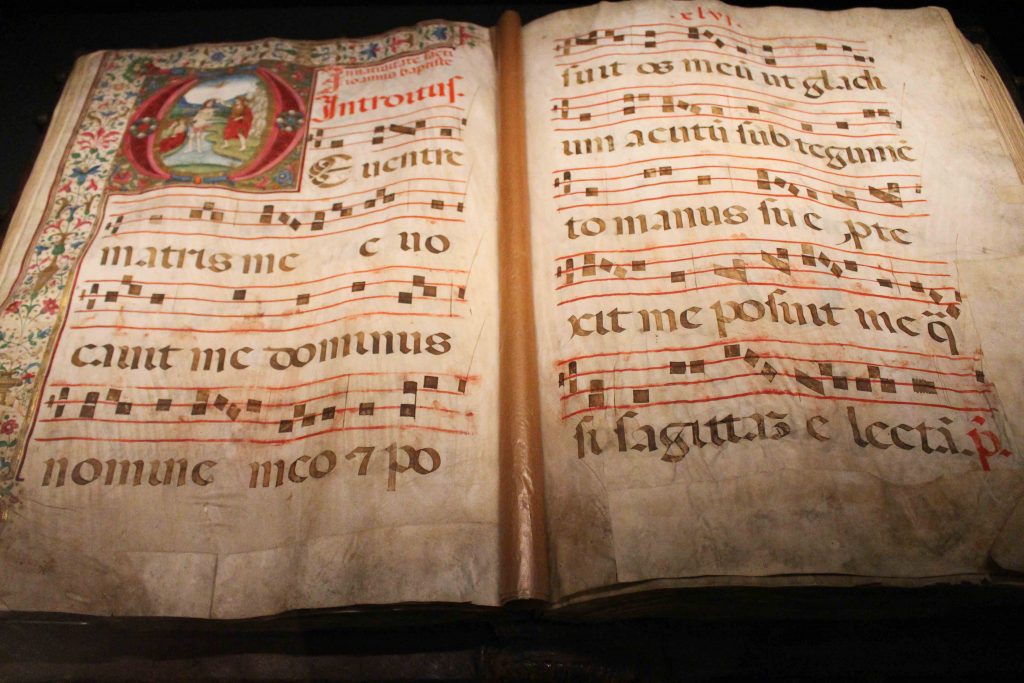 Pieces of the earliest design of original building, write ups of the artists involved in creating the building itself and the pieces within,  and relics from church services of centuries past. The classics nerd in me really loved the exhibit detailing each of the statues and reliefs lining the bell tower. My two favorites were a sculpture of man nicknamed “pumpkin head” (I’m not making this up, I promise.) and the within the representations of various virtues and values of the medieval church, the depiction of grammar: three tiny students sitting at the feet of a giant teacher, disciplining them. Grammar as discipline: makes sense. There’s also a surprisingly interesting story following the debate regarding the design of the facade. Apparently there was much gnashing of teeth, for years, over angles and heights of roofing. I tease, but to them it was serious business, a question of national identity at the time.

We didn’t spend much time in the Baptistry only because there was a loud tour group in there at the same time as us, but it may have been my favorite ceiling in Italy. Yes, over the Sistine Chapel. A massive gold mosaic hangs glittering over you and the stories and characters stand recognizable in spite of its height. I wanted nothing more than to lie on the floor and soak it in for an hour or two. Don’t skip the baptistery. 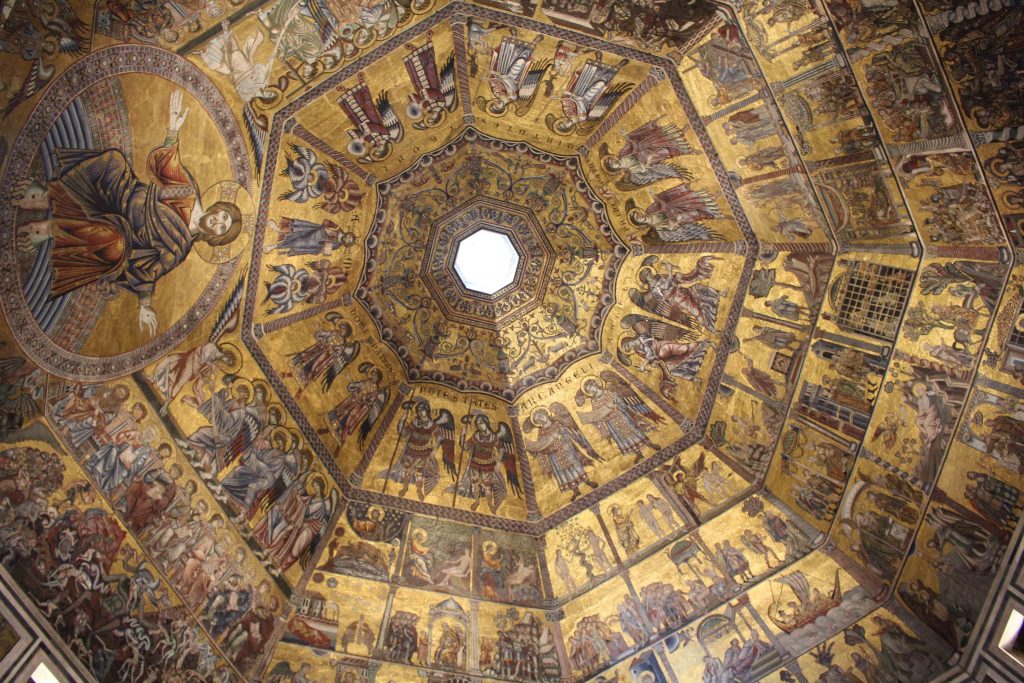 We ended our Duomo day with the campanile, or bell tower. They only allow certain number of people at a time, and don’t try to push through – the guide on duty didn’t put up with funny business or impatient tourists. Another set of winding staircases and tight corridors, but this time broken up by platforms looking out over the piazza at various heights. The final level is only just higher than the duomo itself, but the value of this view is that the dome can make an appearance in your panoramas. Another reason to do the museum before the bell tower: you learn a ton about the carvings lining the building before heading up!

It seems obvious, but if you only see one thing in Florence, make it the Duomo. If you’re planning a trip, give it most of a day to take in everything. We didn’t even make it to the Crypt of Santa Reparata underneath the cathedral! 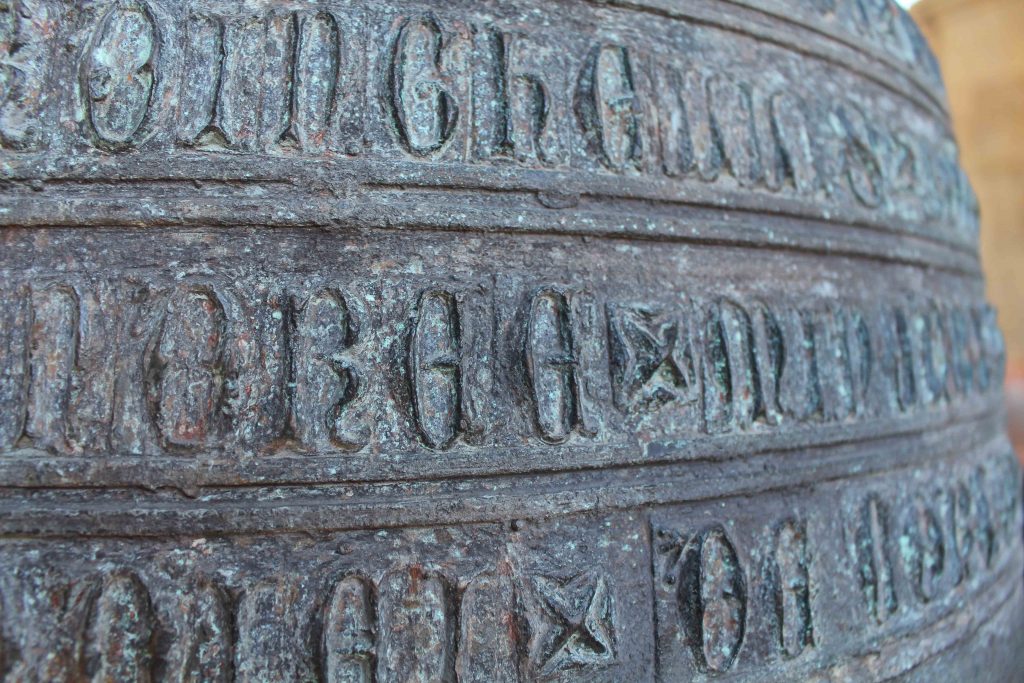 I hope you love the Duomo as much as we did. Stay tuned for more of our favorite parts of Florence next week!

What’s a place that unexpectedly blew you away? Comment below to let me know – I’d love to add it to my bucket list!