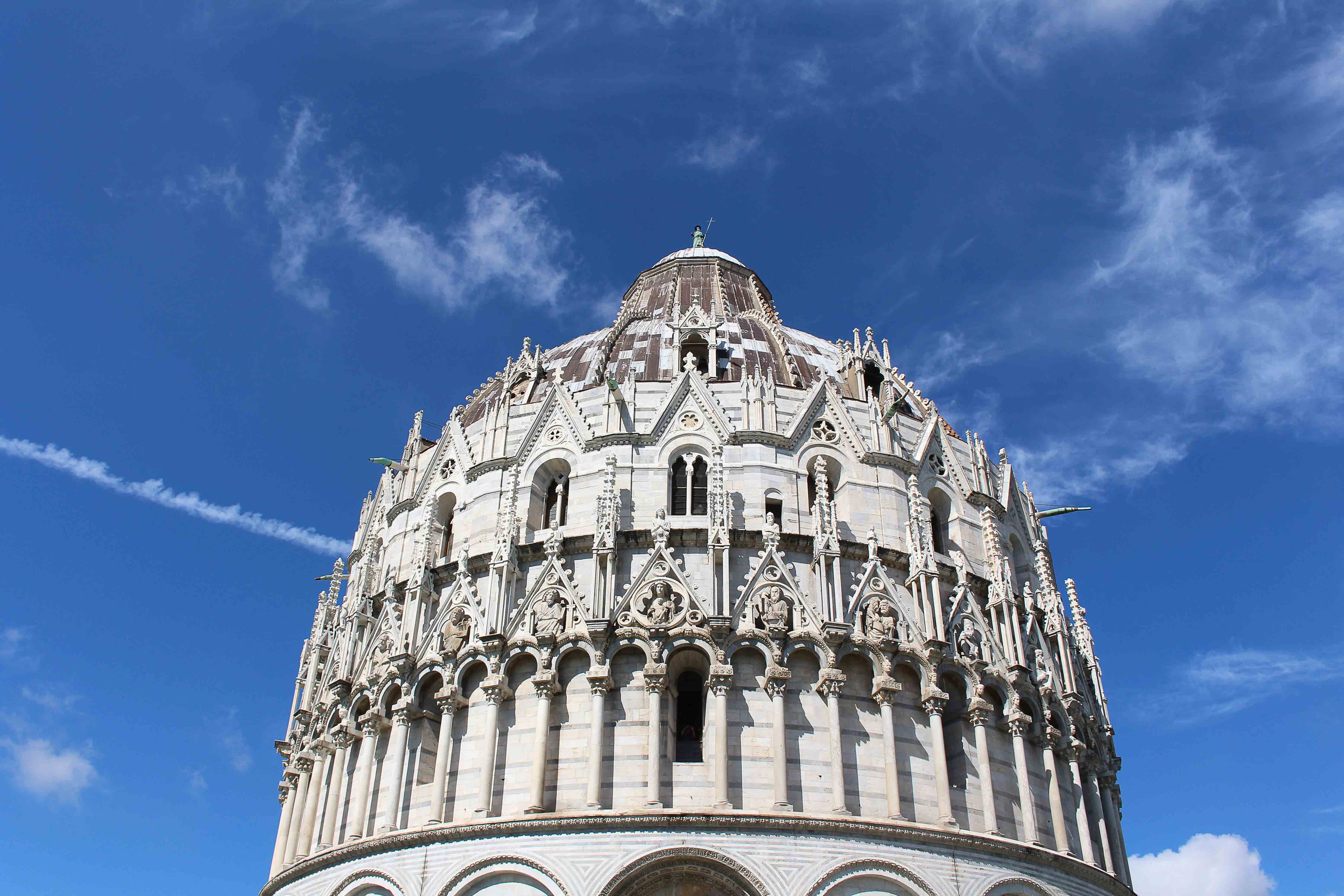 Due to the whirlwind nature of our Europe trip, we didn’t get to spend much time in Pisa. But when I realized it was only just off our route from Cinque Terre to Rome, I knew I wanted to take advantage! 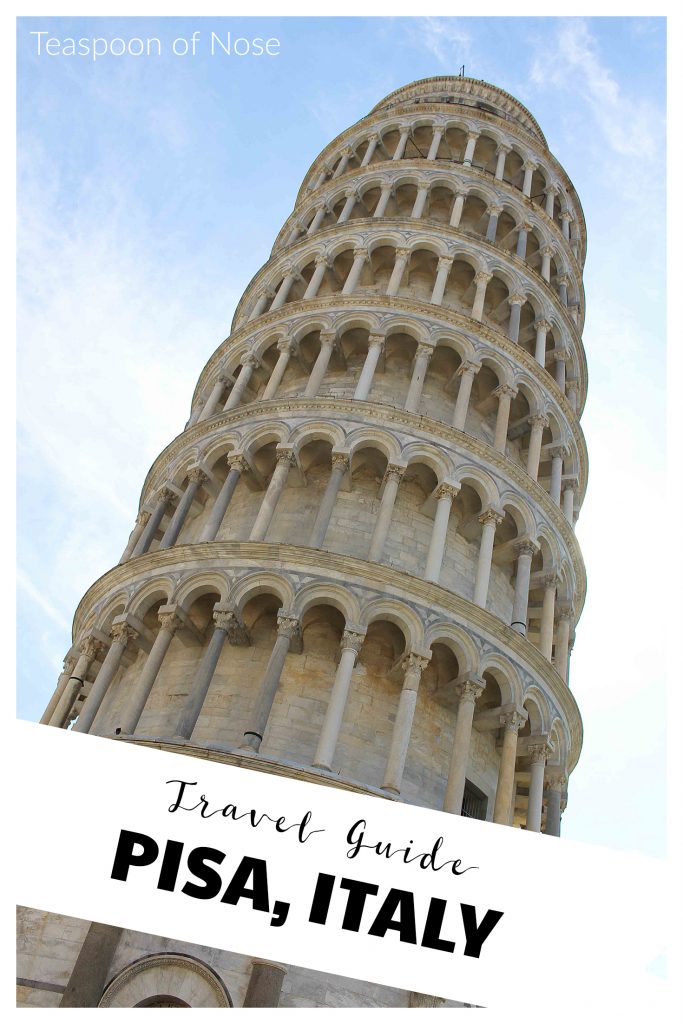 This post is part of our month-long European trip. Check here for our whole trip! 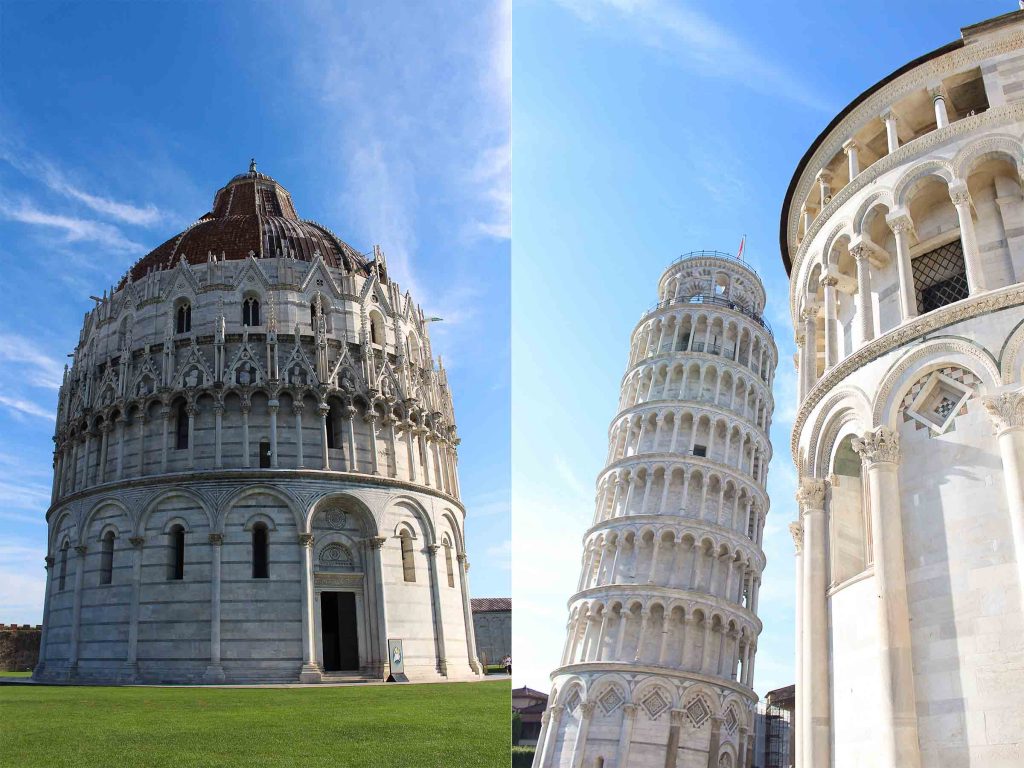 We left early, because we didn’t know what the parking situation would be. Luckily, we pulled into town around 8:30 to find a big parking lot that was mostly empty. Parking = no problem.

The touring parts (leaning tower, museum, etc – even the bathrooms) open at 9. So when we walked through the gates at 8:45, it was almost a shock to see the area completely devoid of people! 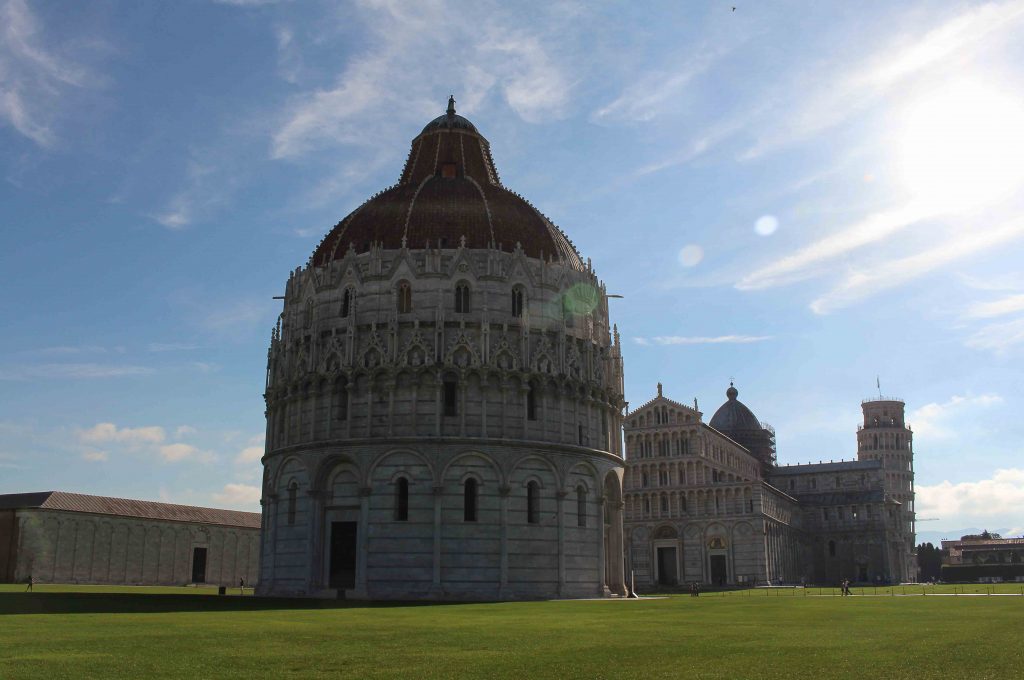 I don’t know what I expected, but the layout surprised me. The iconic leaning tower of Pisa is technically the bell tower of a massive church, complete with cathedral, baptistry, museum, and opera (???, but yes, its there). Additionally, there’s dedicated green space surrounding the buildings, which is a bit of an anomaly in Italy. The manicured grass and lack of ancient buildings surrounding it caught me by off guard, and we stood for a few moments, taking in the majestic architecture in relative solitude.

Right at nine, the tour buses began unloading. We hurried over to the ticket building (right next to the gift shop), where you buy a ticket bundled with whatever you want to see. We opted for just the tower today, but if you’re spending a whole day you may want to get the museum ticket too! The more you bundle, the cheaper it gets. 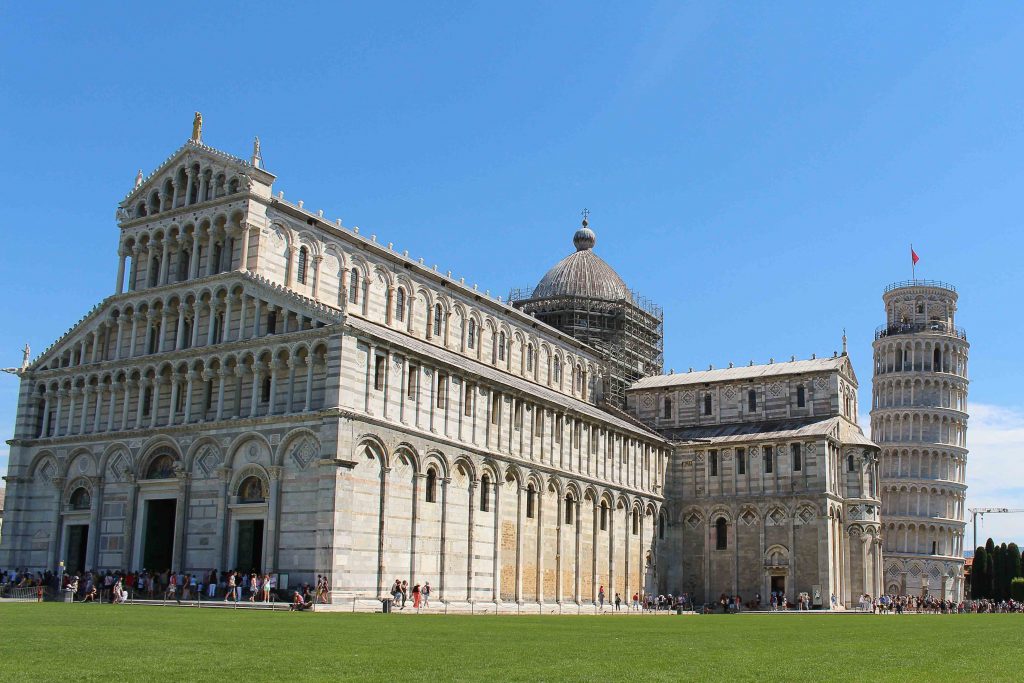 The tower tickets have timed entry, so we dropped off my purse in the lockers (no bags in tower!) and headed for the line. They were surprisingly strict about timing: we reached the front of the line 4 minutes before our 9:40 entry and had to wait until the clock ticked over. It made me laugh, because most of Italy treats rules more like guidelines anyway.

The “leaning” of the tower comes from a lack of planning/research. Constructed as a freestanding bell tower for the cathedral, it began in the 12th century. As they worked on the second story, they noticed a precarious amount of leaning caused by a tiny foundation in very soft ground. Construction went stop-and-go for several centuries, partly due to war and partly due to trying to figure out how to rescue the project. Fun fact: part of the building was actually built curved to offset the lean. Recently scientists did a huge stabilization project, which only straightened it by half a degree but apparently shored it up quite nicely! 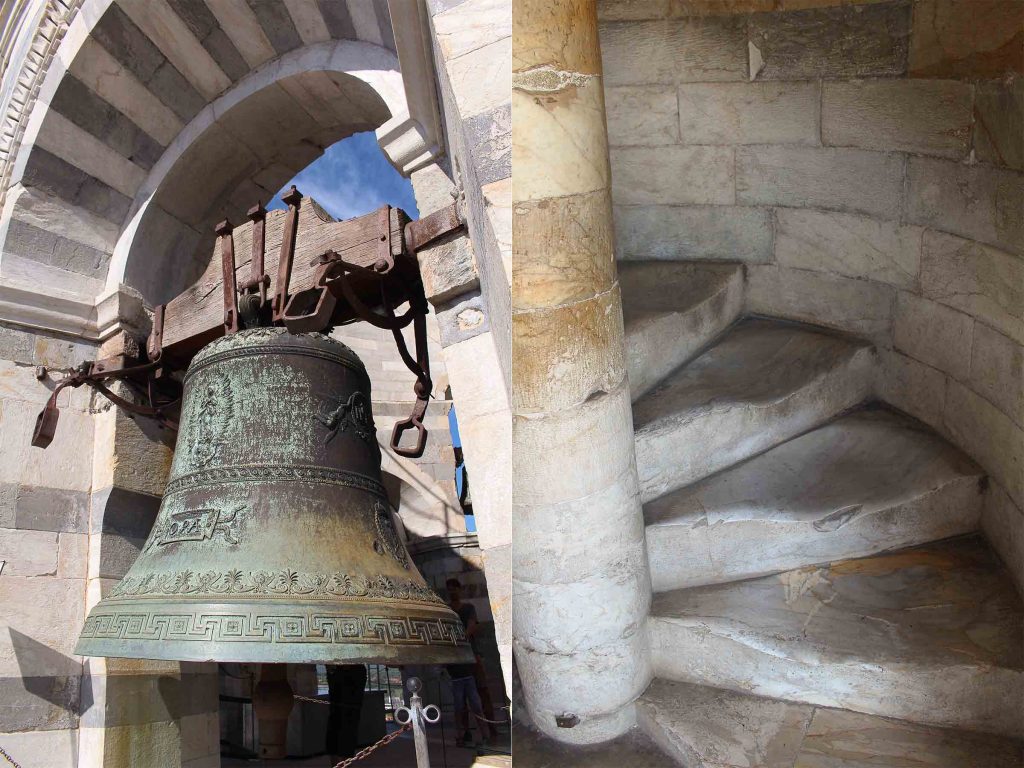 Climbing the tower’s staircase feels a little like being on a ship: your internal balance feels just a bit off. (No rocking like a ship, not to worry!) I found myself leaning on the walls of the narrow staircase just a bit as we rose, even when people weren’t trying pass us heading down. For those who have issues with heights, be warned – it’s a two-way winding staircase, up 7 or so flights in height.

It’s definitely worth it though! The view from the top is spectacular. Surrounded by glowing white marble and the seven ancient-looking bells, you can look down on the orange roofs and surrounding miles of countryside. Pisa itself is bigger than I thought, and standing up here offers some perspective on how much of the city escapes tourism notice. We stayed in the sunny heights as long as we could, before we had the obvious realization that sunscreen may have been a good choice for the day. 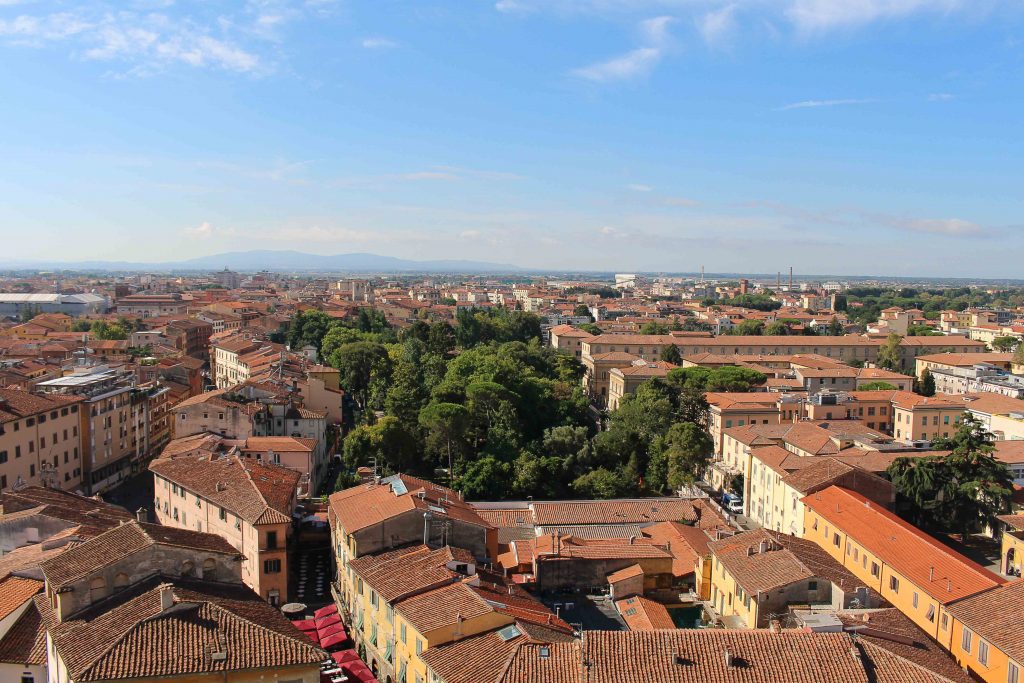 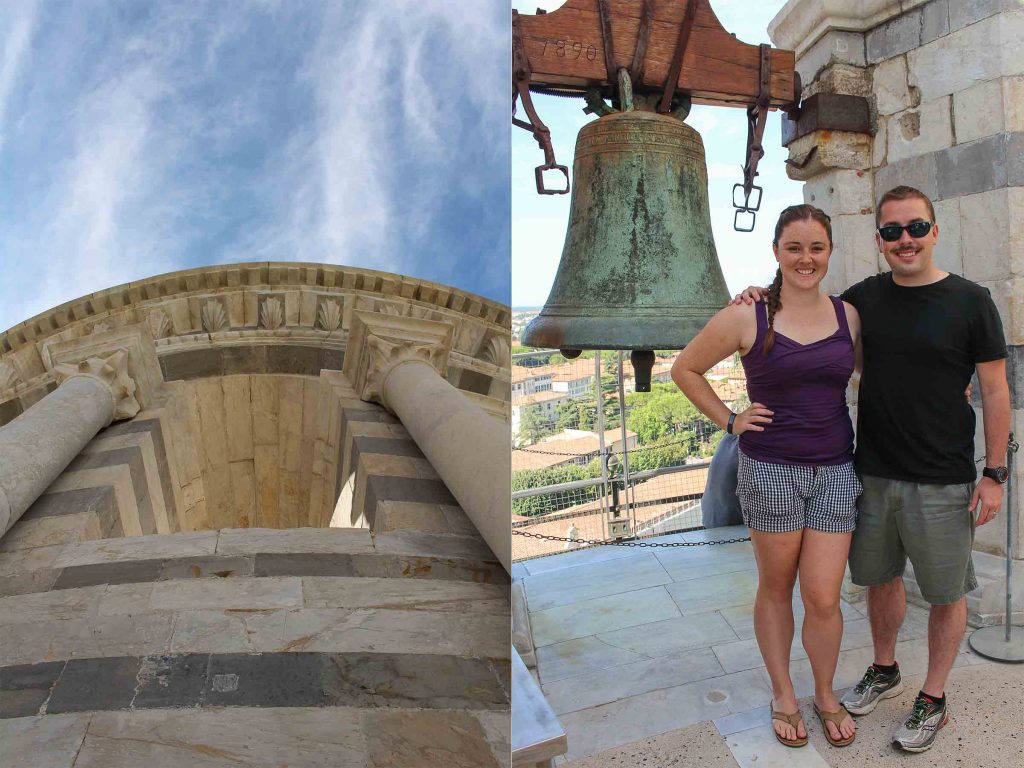 For a bit of breather, we picked up some coffee and muffins from a nearby cafe and relaxed in the grass. I have a special place in my heart for people watching tourists, especially with kids. For us, there may have also been some catnapping involved. But think about this: how often do you get to take a nap in the shadow of a 900 year old building?!?

Our ticket also got us into the cathedral, so we spent an hour wandering the cool marble. European church architecture never ceases to impress me. Currently a restoration project means there’s areas cordoned off, including the fantastically golden mosaic on the ceiling over the altar, but the visible area is breathtaking. I’d definitely recommend sticking your head in. But don’t forget, like most Italian cathedrals, you’ve got to have your shoulders covered. If you don’t, they give you a paper wrap, but I’d come prepared – they look pretty silly. 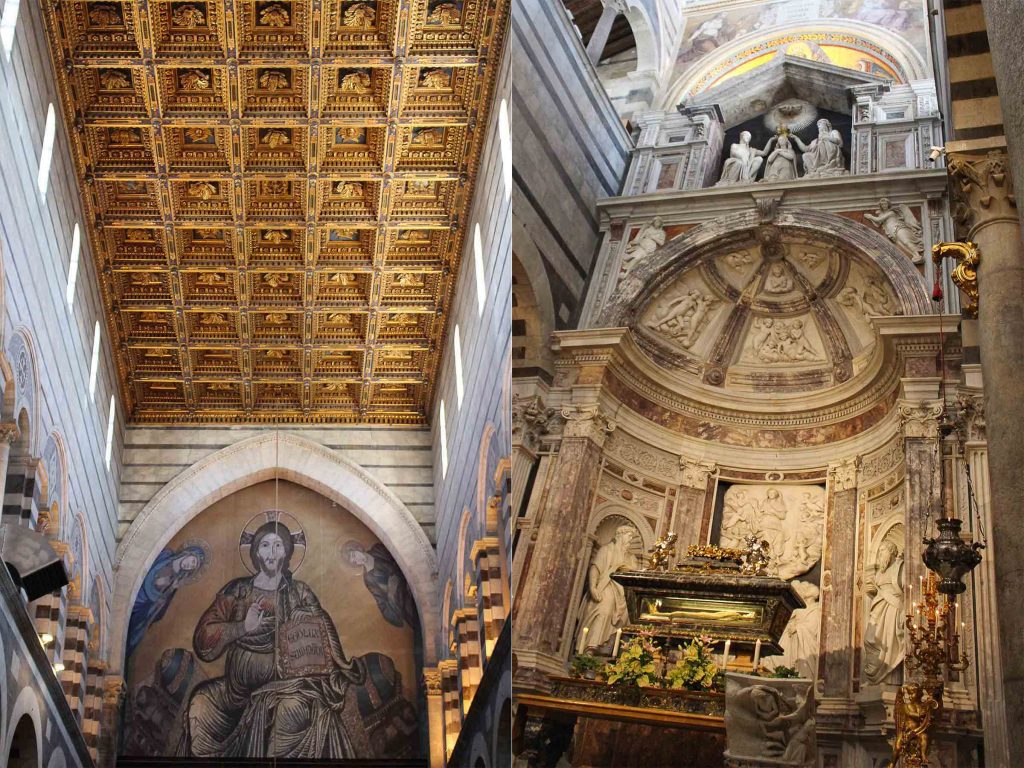 I’m pretty pleased with our time spent in Pisa. While I’m sure the city has a LOT more to offer, seeing the main attractions in a day felt very doable. If you wanted to do all the optional museums associated with the duomo, tower, and opera, you may need to move a little faster than we chose to, so keep that in mind. Located only an hour’s drive from Florence, it would make an easy day trip by train or car. This may go without saying, but the area got progressively more crowded as the day went on. We left around 4 and had to weave through crowds the entire way out. 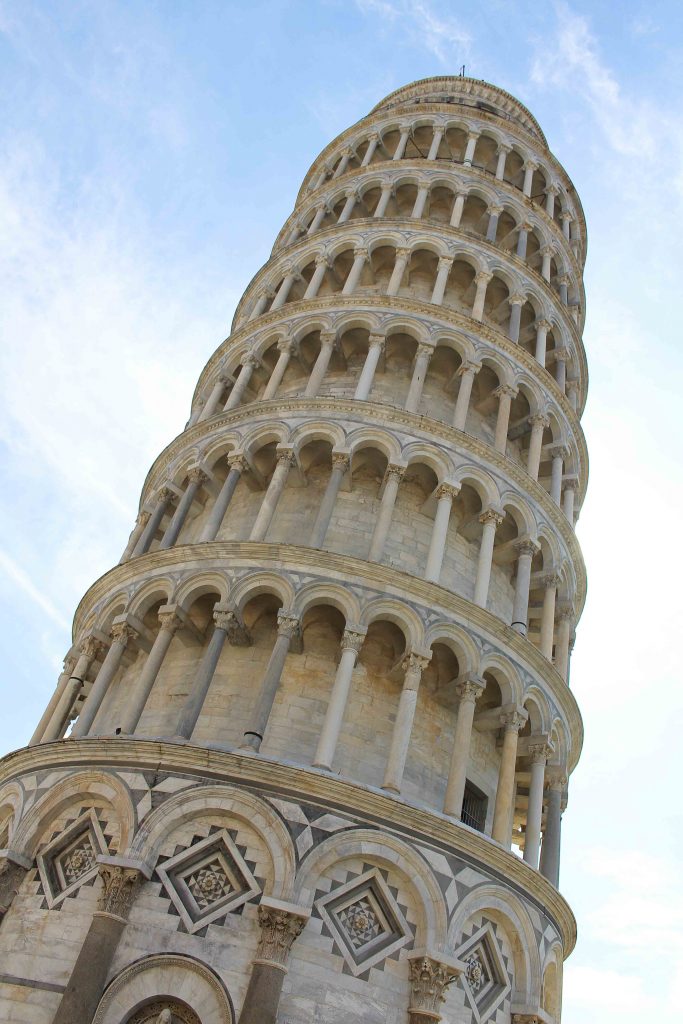 What is your favorite parts about Pisa? What should I see next time??

1 thought on “How to spend one day in Pisa, Italy!”