Nestled in the middle of Rome is another country. Technically the smallest sovereign state in the world, Vatican City is easy to explore and enjoy for a day. There’s two attractions to see here: the Vatican Museum and St. Peter’s Basilica. 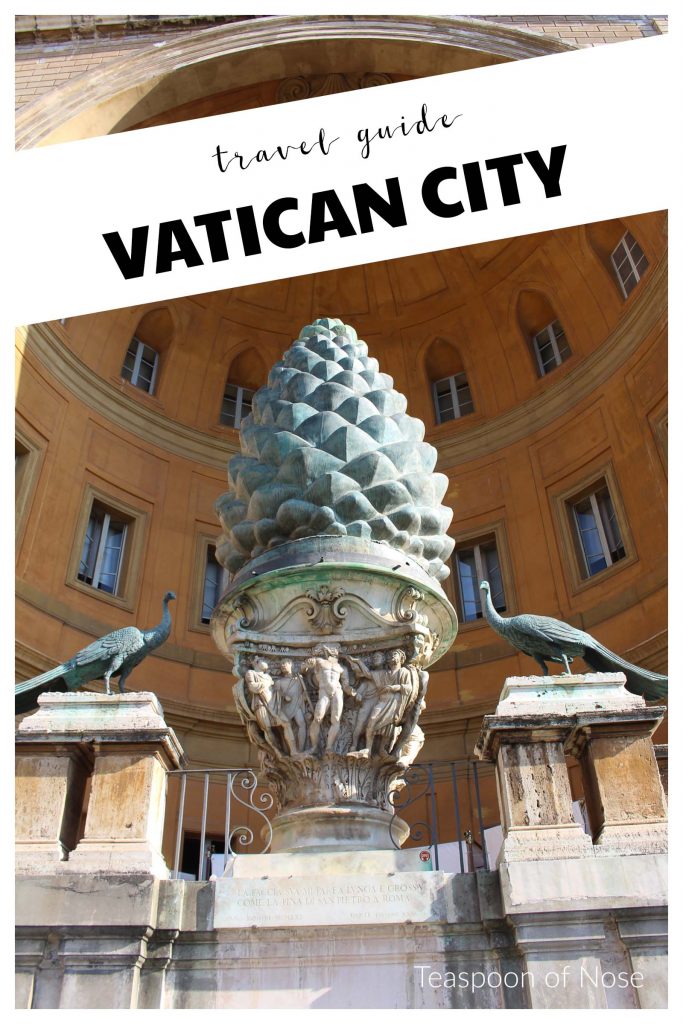 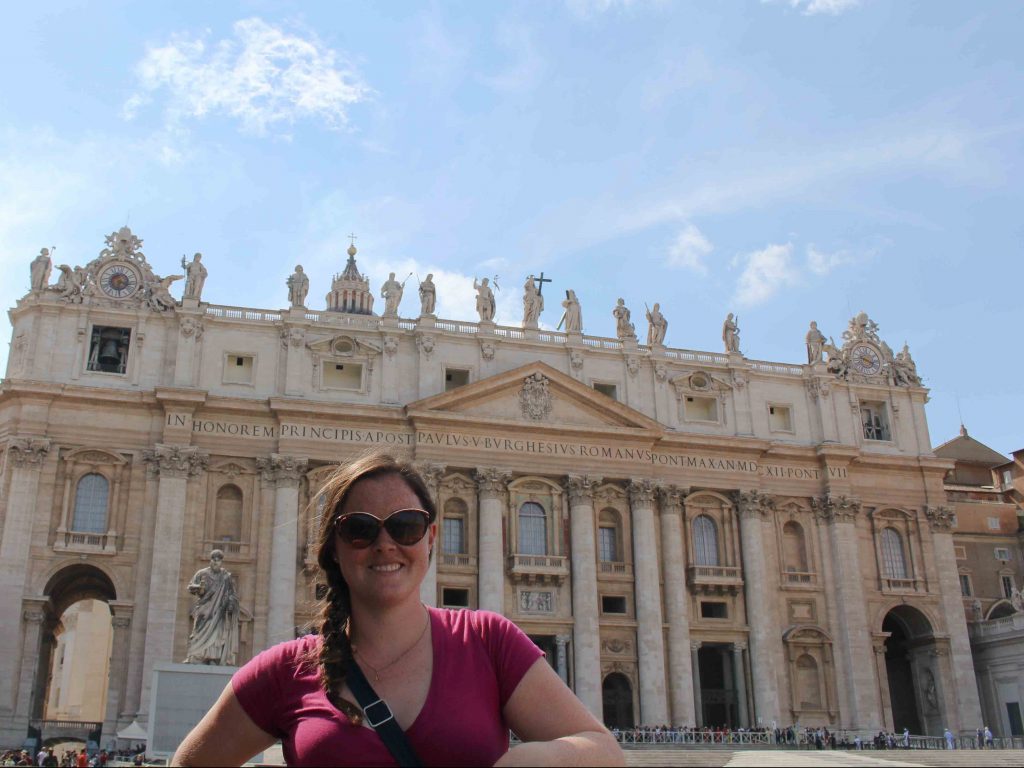 We pre-booked timed tickets to the Vatican Museum for the opening time, which I highly recommend. When we arrived the line was wrapped around one side of the city walls, and when we left it snaked around two! But with timed entry you skip the line other than a quick security check and make your way in.

As I like to do in museums with one most known attraction, I hustled us through the myriad of rooms straight to the Sistine Chapel.

The room is jaw dropping. The sheer volume of color and movement and story that’s captured in the walls and ceiling blew me away. I’d seen photos of the ceiling, but there’s something about being there in person and soaking it all. I cried. And I’m not an art-crier.

The ceiling, of course, deserves all the credit it gets. But the wall behind the altar captivated me with its bright blue background. The more I studied it, the more Biblical characters I recognized.Michelangelo, Botticelli and the other artists managed to show an incredible amount of detail in the frescoes. I’m always impressed with the way artists tell stories, but this takes it to a whole new level.

Alas, there’s no photography in the Sistine Chapel, so I can’t show you any firsthand. But when you go, do what we did and rush ahead to the chapel because we got to soak it all in before it was crammed full of tourists! The downside is it’s a one-way path through, so you end up walking the whole thing twice. Small price to pay for a more sacred experience. 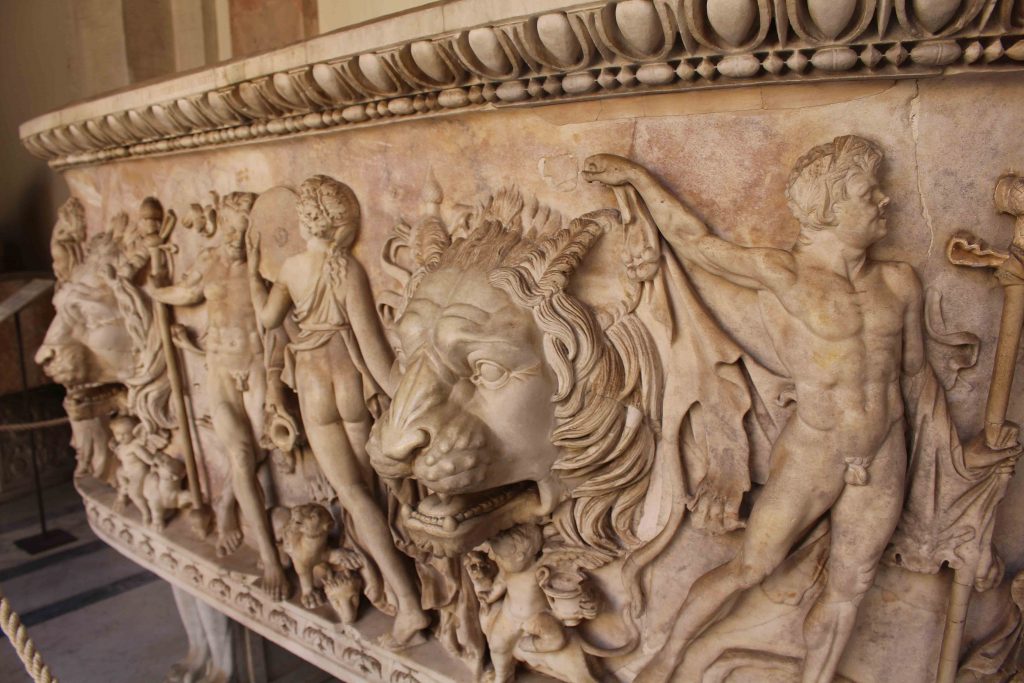 The Sistine Chapel is the star of the Vatican Museum, but it’s not the only thing worth seeing. Room after room of ornate sculpture spanning centuries. Purple marble, intricate mosaic floors and gilded ceilings. A room of handprinted maps of Italy that were so detailed we managed to find even our tiny fishing village of Corniglia on one.

Other halls held artifacts dating back as far as recorded civilization. Pottery from the Fertile Crescent. Tools from Mesopotamia. Egyptian sarcophagi. Room after room of metalwork, carvings, and sculptures from practically every society on earth! The riches were unparalleled.

We spent hours taking it all in. There’s food downstairs near the gift shops, so we didn’t leave the museum itself all day!

While you’re there, don’t miss heading outside. Unfortunately most of the Vatican gardens are closed to the public, but there is a courtyard open with a few fountains and a look at the picturesque side of the museum building. Nearby there’s an underground exhibit of papal vehicles over the centuries, including a video about the assassination attempt on the pope in the 1980’s. It’s pretty fascinating: I loved seeing the way Pope John Paul II responded to his would-be killer. Also crazy that there’s been only one (that we know of) attempt  on the Pope’s life in recent history.

Late in the afternoon, we finally set out to see the best known part of Vatican City: St. Peter’s Basilica. 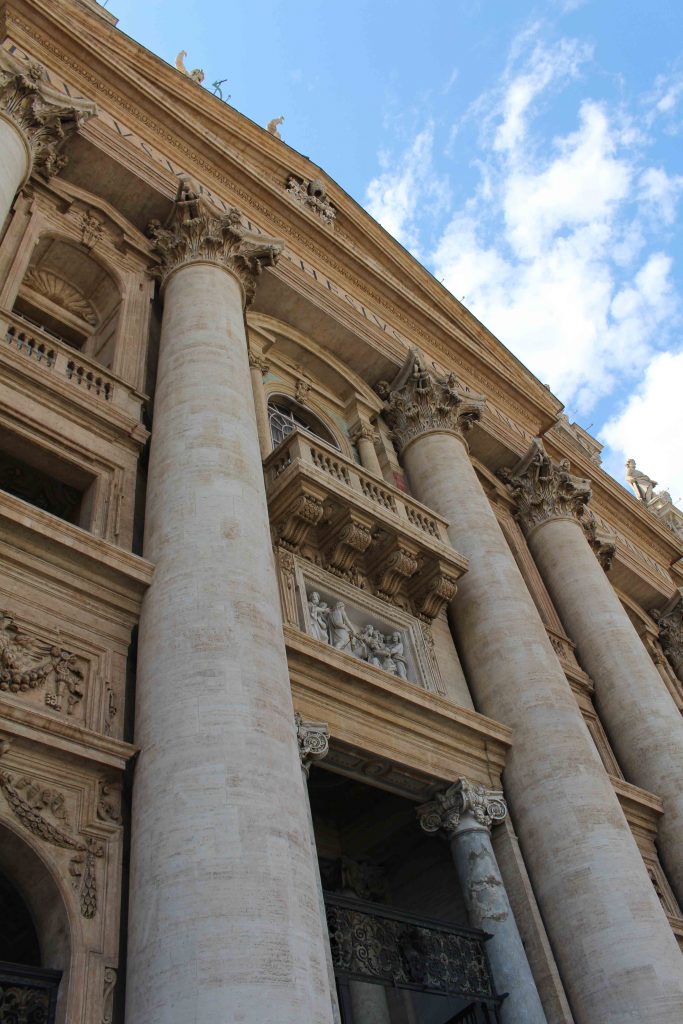 There’s something monumental about walking into St. Peter’s Square. I’ve seen the images of thousands gathering to hear the Pope speak or to await the election of a new pope. Standing in that space thinking about just how many people could squeeze in here, and how many people have stood in that area over the centuries, gave me a feel for  the significance in a way I didn’t expect.

With it’s down airport-level security lines, it takes a bit to get in the basilica itself. But don’t let the hot sun or long line deter you – it’s worth it! On your way in, keep your eyes peeled for the Swiss Guard or other guards. They’ll give you the side eye, but they didn’t mind me taking photos. 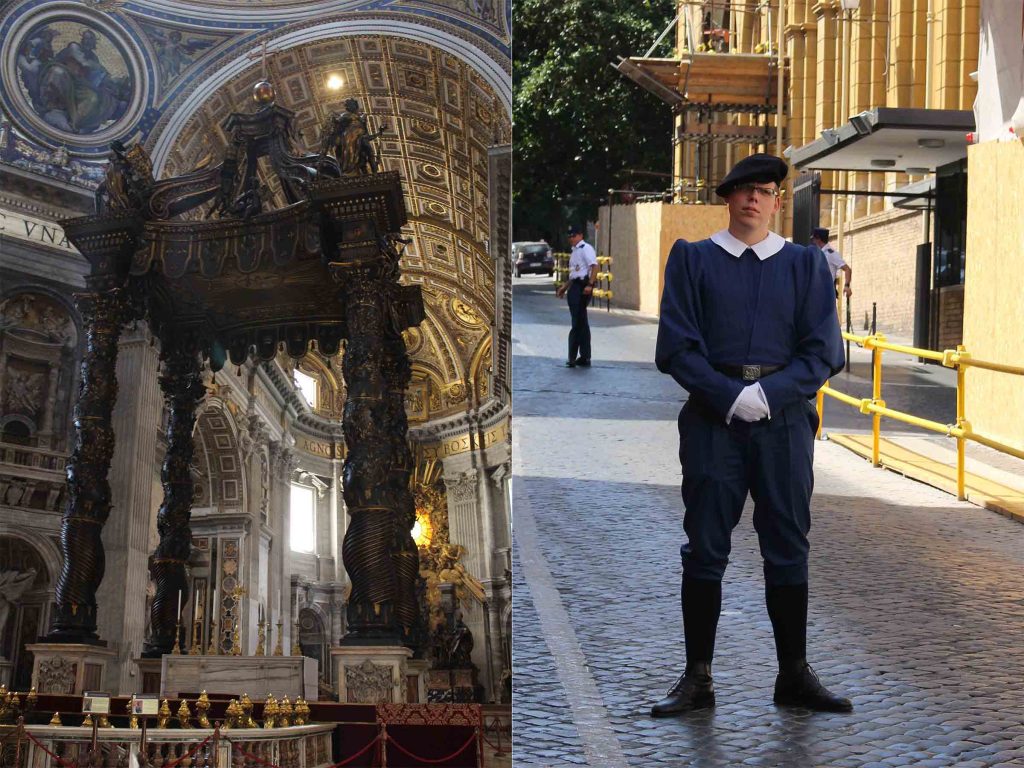 The marked temperature difference inside the basilica immediately offers sanctuary within its cool marble walls. In spite of few windows, the room seems to glow from golden mosaics reflecting down. The cathedral is the biggest one I’ve ever seen, with 15 foot sculptures in every alcove and everything in sight made of marble, gold, or the deep warm tones of polished wood. The great central structure is the Baldacchino di San Pietro (doesn’t everything sound better in Italian?), created by Bernini to mark the location of Peter’s supposed tomb under the basilica. It doesn’t look that big compared to the size of the room, but it’s actually over 66 feet high!

Words don’t quite cover how stunning the whole place was. I could have stayed for hours, taking in the intricacy of the whole place. I wanted to lay on the floor and stare at the ceiling for an hour or two.

Entry to the basilica itself is free, although there are fees to climb the dome, get a guided tour, or skip the line. St. Peter’s square is open to wander in freely. 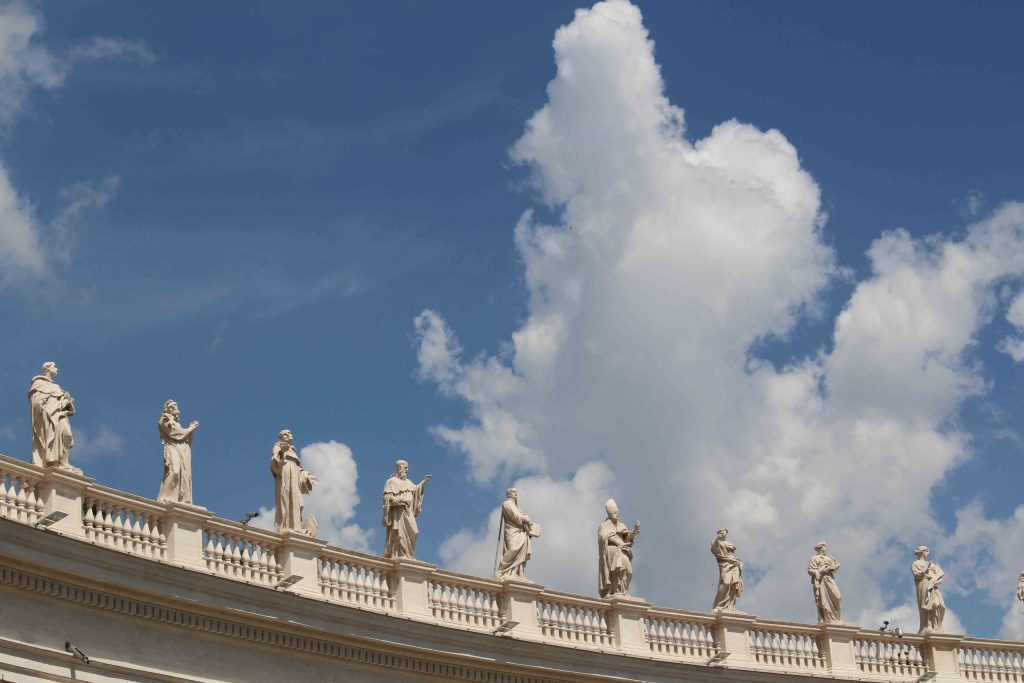 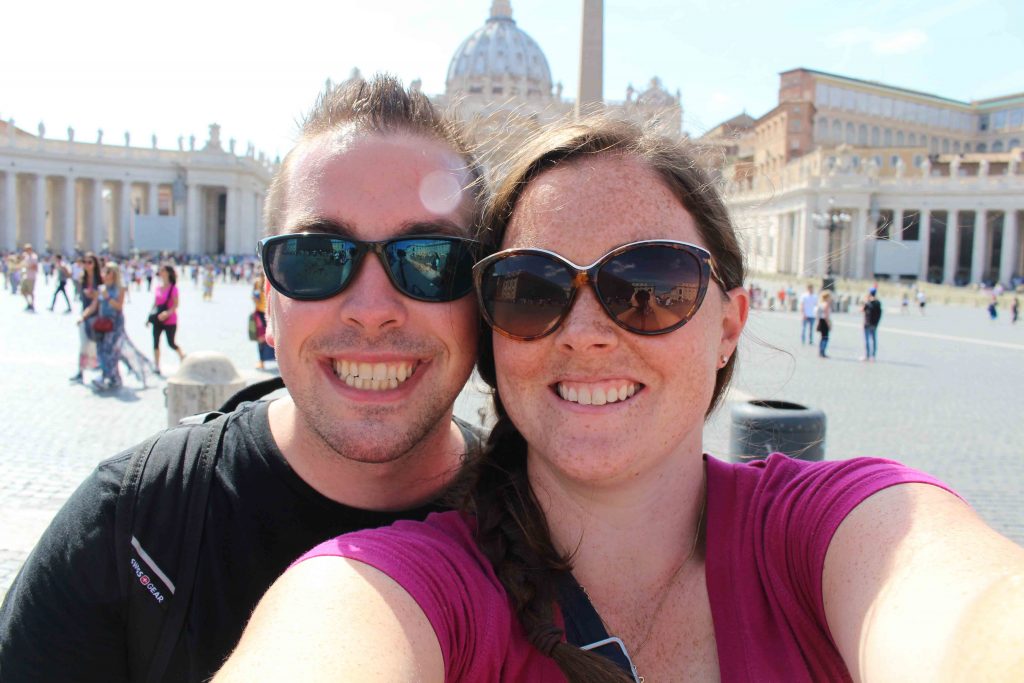 3 thoughts on “A country within a country: a day in Vatican City”