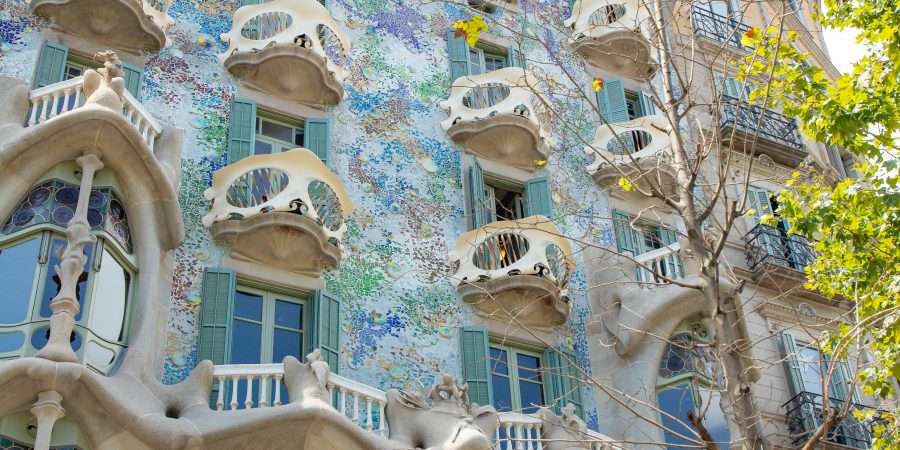 Gaudi is famous for his modern architecture designs, but are they worth spending time and money on when you’re in Barcelona? Here’s what you should know to decide for yourself.

One of the main things people do in Barcelona is to see the Gaudi works. A modern master, Antoni Gaudi is one of the few architects that has made it into global recognition, even if you don’t know much about architecture.

I like looking at architecture: I’m a sucker for a beautiful building, and I could wander city streets for hours. But I know nothing about architecture, and modern-ish styles aren’t my favorite. So when I planned a trip to Barcelona, I was a little skeptical about Gaudi. The little I’d seen online looked a bit silly. Photos often portray the outside of the Sagrada Familia as a drip sandcastle. I didn’t see the appeal.

Oh my gosh, Gaudi exhibits are so worth it.

Seriously. I cannot stress this enough. I’m now completely on the Gaudi-as-genius bandwagon. Here are a few reasons why:

For one thing, they’re much more striking in person. His style is so full of movement and motion. Lines are rarely straight, and when they are, it’s purposeful. Everything is so aesthetically pleasing and has such intricate detail that a camera can’t capture both the level of detail AND the massive scope of each building.

One of the things I have trouble articulating with no real knowledge of architecture or physics is that he is a master at combining form and function. Everything is both beautiful and functional. For example, the center of the Sagrada Familia is lined with columns. They’re lovely, creating a forest-like feel in spite of all that stone. They’re different colors and at slight angles, echoing the ways trees grow alongside each other in nature. However, these are all mathematically strategic decisions. Each color is a different type of stone, with the most load-bearing columns made of the strongest stone. The placement, angle, and type of stone is intentional to support the roof & towers. They’re both purposeful and beautiful.

So while in photos it may feel a little too psychedelic for your usual tastes, I’d challenge you to visit at least one Gaudi exhibit and see if it’s less “Lucy in the Sky with Diamonds” and more embracing the best that nature and color have to offer.

If you’re unsure: start with Parc Guell. It’s the cheapest Gaudi ticket you can get in Barcelona and will offer a taste of his design while also largely allowing nature to be the star. Which, if you look at his style, is kind of his thing.

The park is large, so wear comfortable shoes. Pavillions making the hillside park feel less hilly, and there’s a few houses in Gaudi style within in the park that are sometimes open to the public. There’s also the massive overlook called Plaza de la Natura that you may have seen photos of online. Real talk: this area is probably going to be crowded and not quite as magical as it looks in photos. But the views of the city – with the Sagrada Familia prominent in the distance – are pretty cool, as are the colorful mosaic benches lining the rim.

Give yourself at least an hour to wander the whole park, or the whole afternoon if you want a break from city life. The park only felt crowded at the Plaza de la Natura overlook. Otherwise, there didn’t seem to be many people nearby.

Up close, it’s no sandcastle. Each side, each tower, each angle has a purpose from a storytelling point. The doorways are covered in depictions of Bible stories and nature.

It was so cool to see the way his purposeful decisions went into telling stories from the same intention has gone into the Biblical motifs in every corner. Each side of the church exterior tells a different story. While not portraying Bible stories in the old school church designs, Gaudi weaves them into practically every surface of the building.

It’s very much how old stained glass was designed so people who couldn’t read could recognize Bible stories depicted. Gaudi does this but on every inch of the facade.

Walking into the Sagrada Familia is magical. The massive space glows with light from the stained glass, arranged in rainbow order. In spite of being a massive stone building, the place feels light and airy. Unseen windows at the top fill the roof with clear light, making it really feel like looking up into a forest canopy.

Audioguides can be hit or miss, I know. The one for the Sagrada Familia is excellent, so definitely buy it with your tickets. It’s an app on your phone, so be sure to download it and bring headphones along with you. Another excellent action to detail is the background music on the tracks – while it’s not church music, it brings a sense of the sacred to the experience.

There are three main Gaudi houses you can tour in Barcelona: Casa Batlló, Casa Milà, and Casa Vicens. Since they’re not cheap tickets, I opted for just one and chose Casa Battlo. While I can’t say how amazing the others may be, Casa Batlló was incredible and I’m so glad I picked it!

In a similar vein to the Sagrada Familia, the mix of aesthetics and engineering is just amazing. There’s an underwater feel he weaves into the design without getting cheesy. Like the Sagrada Familia, everything is both beautiful and purposeful, even down to the shape of the arches in the roof. The audioguide here is also excellent, in the same style as the church.

Casa Milà and Casa Vicens are also open to visitors. Next time I’m in Barcelona, I want to try these too – everything has been worth the ticket prices!

Planning your Visit to See the Gaudi Works

There’s no way around it: Gaudi tickets are expensive. Parc Guell is the cheapest at 10€ as of 2021, and Casa Battlo was a whopping 35€ just to get in.

But take it from a cynic: they’re worth the price.

In general, you really need to book in advance. If you’re traveling in the offseason, you can sometimes buy tickets same-day, but I’d advise not risking it.

Want more of Barcelona? I’ll be sharing both a weekend guide and a restaurant guide soon! In the meantime, check out my Pinterest travel boards for more trip inspiration!