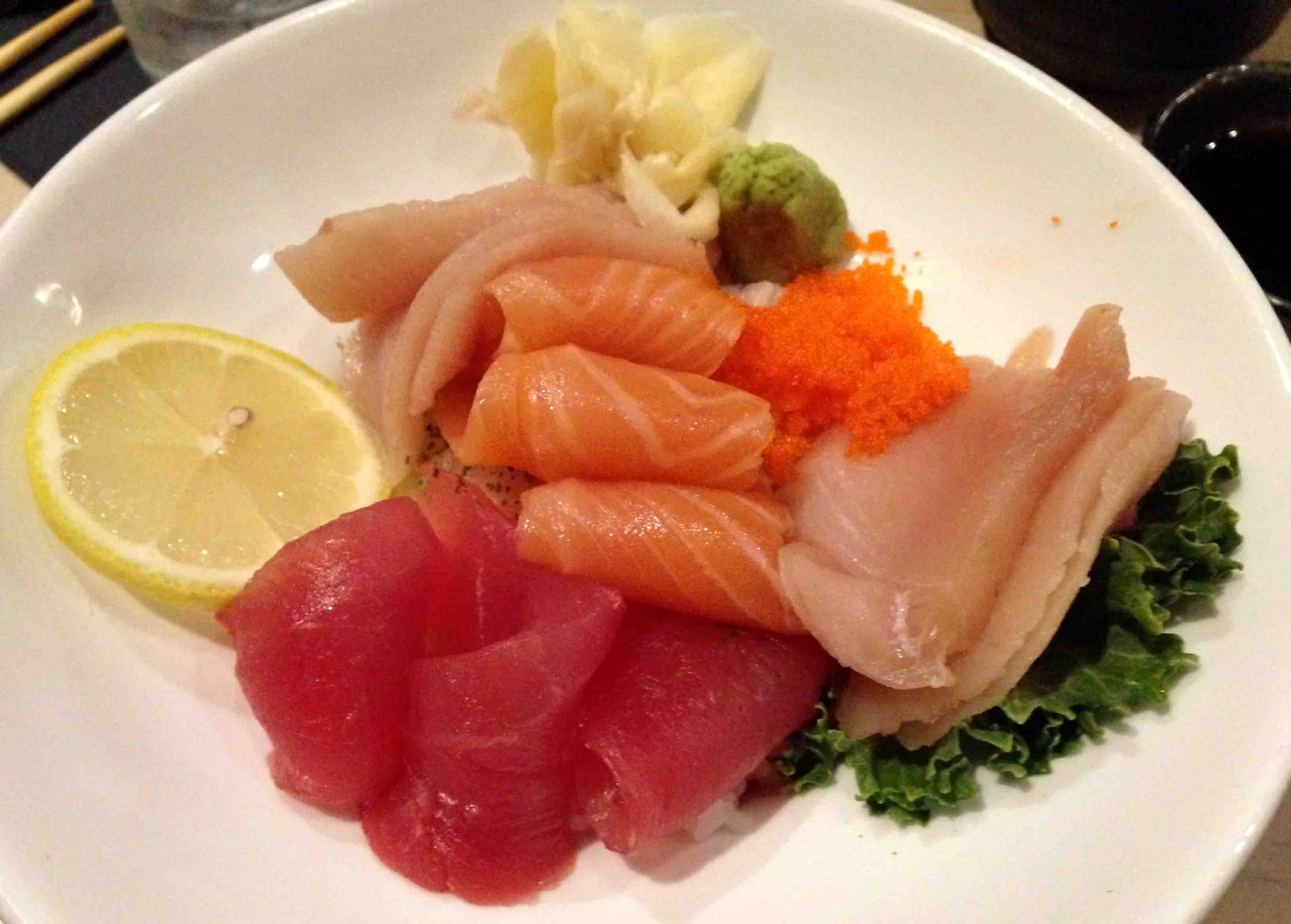 Triangle Restaurant Week happens every January where participating restaurants offer a prix-fixe 3 course meal for a reduced price (usually $30 for dinner). I love it because Logan and I are in that phase of life where we occasionally go to nice restaurants but don’t  order both appetizers and dessert in addition to our meal. Bit too extravagant for our budgets normally, but Triangle Restaurant Week saves the day!

We headed to Basan for some Japanese

and sushi with my parents. In addition to their Triangle Restaurant Week special menu, they also had something they called Broadway menu (or show menu? I can’t remember exactly), which had six or seven entrees that they could serve quickly for show patrons worried about making the curtain. It’s practically across the street from DPAC, which makes it a great choice!

The vibe funky and dark, with small tables and a couple spaces to eat at low tables sitting on the floor. After waiting a minute for the hostesses to get caught up on some paperwork  (I’m fine with waiting, but I wish they’d acknowledged us while they did that!), we got a booth near the kitchen/sushi bar.  I liked because you could see some of the action, but we still had a good amount of privacy.

We all got drinks: my mom and I both chose a Squeeze Play, which had raspberry liquor (the main thing you tasted) with champagne. It was good but very intense (flavor-wise, not alcohol-wise); the type of drink you only need one of!

Onto the important part: food! We split a sushi roll to start with, because we can’t resist sushi. The Screaming O had some of my favorite things in it (spicy tuna, shrimp tempura, and spicy mayo) plus it was pretty to boot. I could’ve done with a bit more spiciness, but it was flavorful and a perfect taster to get us excited about the feast to come.

For my first course, I chose the mini niku udon.

The broth was perfect! So flavorful, and not just salty but with the beef flavor. Udon noodles are fun to slurp too, if you want your parents to give you the side eye mid-meal. I could’ve eaten a big bowl of that and called it quits. Possibly my favorite thing I ate all night.

For my main dish I went with the chirashi, which is sashimi over rice. My first impression was just how gorgeous of a dish it was: the cuts of fish looked beautiful, as if curated into an edible work of art. Plus it had fish roe which is possibly my favorite part of sushi anyway. I saved all of it for last and mixed it into the rice to savor the taste and texture as much as possible. The sashimi itself had such a subtle flavor and yet simultaneously so rich. Plus, it filled me up so fast that I struggled to eat everything on my plate! Logan helped. He chose the ginger beef, which I loved almost as much as mine!

I confess that dessert was a disappointment. Logan and I both chose the chocolate cheesecake, and what we got was nowhere near cheesecake in texture or flavor. It tasted like mediocre chocolate cake. I of course ate it anyway, because I’m not the kind of woman who says no to chocolate or dessert. (Come on now, right?) My dad ordered the matcha panna cotta and that was better – next time I’d choose that.

My take: I loved the soup and the main courses. Sashimi was killer good. I’ll probably take my sushi cravings elsewhere, though, and skip dessert.

3 thoughts on “Eating raw at Basan”