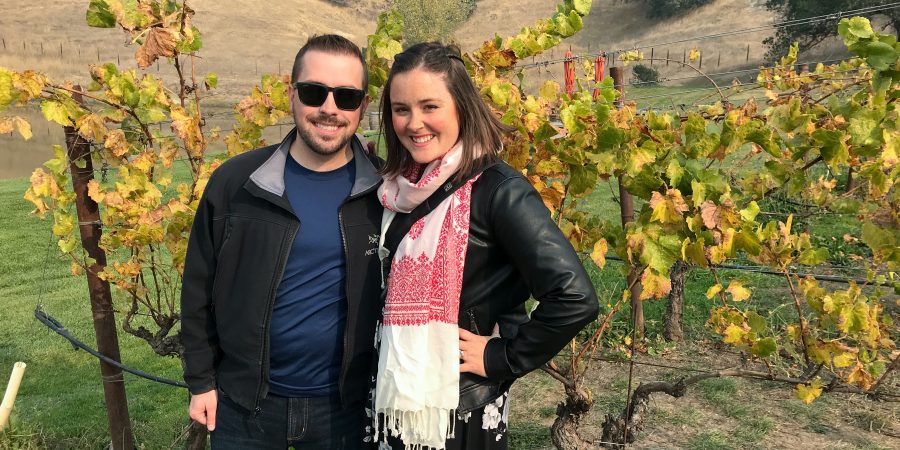 It’s finally time to answer the big question: how is life after deployment? Today, I’m sharing some reflections on how reentry has gone for us as a couple and for me as a spouse.

Please keep in mind that everyone’s experience with deployment is different, and that varies even more when you think about the wide range of demands and job descriptions different military members face.

As I write this, my spouse has been home from deployment for three months. I wanted to wait a few months to give a bit more perspective than those euphoric-but-also-heightened few weeks immediately after the reunion.

Like everything in the military world, his return plans changed several times and I didn’t know for sure until an hour before he landed in Oklahoma.

During the lead-up, his flight information was contingent on getting on a rotator flight he wasn’t guaranteed a seat on. It worked out better than we’d anticipated – so much so that I had to leave North Carolina and drive across the country a day sooner than I’d originally planned – so I’m not complaining.

Naturally, two of his four flights were significantly delayed, so much so that he nearly missed his final connection. I had already written off his arriving that day (he was landing in a tiny regional airport) when he called and said that even that plane had been delayed so he managed to catch it. Since his final flight and my drive to the airport were both approximately one hour, I hustled into a dress and drove at warp speed, only to pace the tiny airport for twenty minutes before he arrived.

I honestly didn’t think I’d cry. Of I would be overjoyed to see him, but we’d been able to talk enough during the deployment that it wasn’t as if I hadn’t seen his face in six months.

Yeah, right. I broke into an ugly cry as soon as I could see him walking amongst the crowd down the hallway.

In the days immediately following his return, he mostly wanted to sleep. Partially from a crazy return travel schedule but mostly from six months of work 12-15 hour days, seven days a week.

His parents and two brothers came to visit us shortly after and very sweetly helped us move into our new digs. We’d thrown our stuff in storage to not pay rent, and to have that many hands to help us move in and start unpacking was SUCH a godsend. It also gave us plenty of catch up and relax without me trying to rush us into getting life back to “normal.”

We took a fantastic vacation a few weeks after his return and had a great time. Getting away from the realities of life and the minutiae of chores helpful for both of us, giving us more space to ease back into real life. One tip: if you plan a trip, plan one that involves a lot of down time. Whether for catching up or just resting, we spent a LOT of time hanging out doing nothing because that was what he needed.

Since then? We’ve fallen mostly back into what was normal before he left. Life after deployment feels mostly like life before deployment. We’re lucky, he hasn’t struggled with PTSD or some of the other common struggles many servicemembers deal with.

The main exception is his bandwidth. I want to squeeze in as much fun as possible, now that he’s back and we’re PCSing (leaving this location) this summer. But he’s doesn’t have it in him to take day trips every weekend right now. Which is totally fair: he spent half the year in 2018 spending all day every day working, eating, or sleeping, so his “relaxing” tank has been running on empty for a long time.

I’m good. I have my person back. Half my bandwidth isn’t diverted to dealing with him being deployed. I’m grateful he came back healthy and happy and overall had a good deployment experience.

Yes, we got back to our usual level of bickering faster than I thought we would. We are married, after all. 😉

So to those of you about to have your spouse return: buy the outfit. Make the sign. Pray a lot. Do what makes you feel excited and happy and gets you through the days.

To those of you who just got them back, and it’s harder than you thought: be patient, with yourself and with your spouse. You’re re-learning how to be in the same space, with a deployment’s worth of new baggage on each side. Don’t be afraid to ask for help in whatever way you need it.

Thank you to all of you who’ve reached out to tell me how this has resonated with you and with encouragement! I hope this gives you a little hope for life after deployment.

Keep in mind I intended this series less as a “how to” and more of a “here’s how it is/was for me, and you’re not alone.” There are tons of posts with tips and tricks for surviving on Pinterest if you’re looking for that too!

If you want more about deployment or life as a military spouse, you can find the whole series on my military life page.