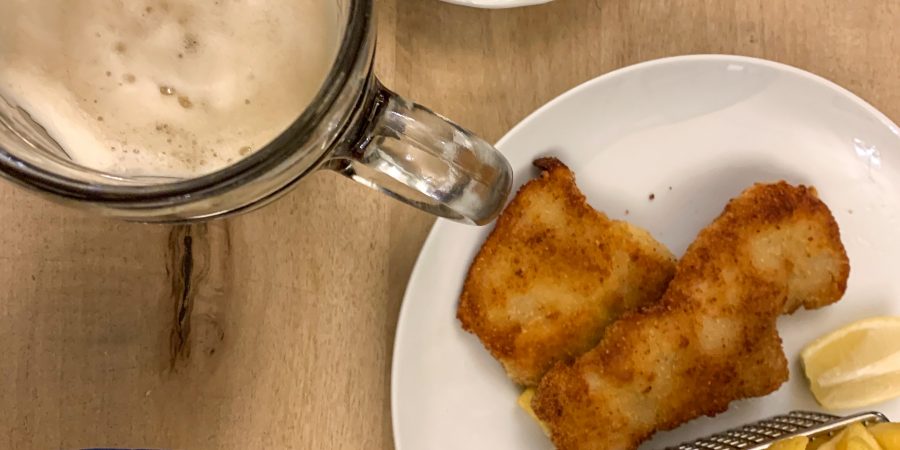 Want help finding great Munich restaurants? Here are a few to get you started!

German food sometimes gets a bad rap, but I think that’s mostly because people haven’t had truly great German food. With that in mind, here are some of my favorite Munich restaurants! They’re not all traditional meals, but hopefully they get you started on loving German food!

First on the agenda shouldn’t be food, but beer! Munich is a beer mecca. This goes back to 1516, when the rulers of Bavarian said that by law, beer could only contain water, hops, and barley. Known as the Reinheitsgebot, or beer purity laws, these are still on the books in Munich.

There are six main breweries that have been operating for hundreds of years: Hofbrau, Augustiner, Palauner, Spaten, Hacker-Pschorr, and Lowenbrau. If you’re in town for a few days, it’s not too hard to try a beer from each. You don’t have to go to each one’s brewery to drink it – every restaurant in town offers at least one of these – but here are the bierhalls that you should visit.

Hofbrau is one of the oldest of the Munich breweries, and state-owned, ever since the 16th century when the King of Bavaria gave them a monopoly on making wheat beers. The building itself is historic and massive, feeling like a step back in time in some of the smaller rooms. That being said, this is a great spot to have a drink only – we didn’t think the food was all that great, and then the next day a local told us that’s their general reputation. Go for the beer, not a meal.

After visiting this brewery’s bierhall in Salzburg, we knew we wanted to go see its Munich birthplace. There are actually several Augustiner bierhalls/restaurants in the city, so we went to the Stammhaus location. It was full but not overrun, the kind of crowd you want at a bierhall. Don’t miss the light fixture showing the coopers dancing – it relates back to the Black Plague and represents the same story as the Rathaus-Glockenspiel.

Still technically a bar/pub/bierhall. But not one of the brewery’s exclusively, so I’m counting it as a restaurant for Munich purposes. Wirsthaus Zum Straubinger is a great spot because it’s just off the tourist main path, lending a decidedly local ambiance. We went for lunch and were the only ones not speaking German! We shared two beers and two versions of Schnitzel and it was the most perfectly German meal to eat right after getting off the train.

There is an iconic Munich breakfast pastry, and you need to try it. It’s called a schmalznudel and it’s a cross between a donut and a funnel cake. We headed to Cafe Frischhut for breakfast, after reading that this is the best place in town to try one. We also had a krapfen, a German jelly donut with a sugar coating. Both were good, but I may have liked the krapfen better only because of the filling!

If you want a truly authentic Munich lunch, skip the restaurants entirely and head for Viktualienmarkt. It’s a year-round market selling everything you could want for lunch: hot meals, sandwiches, and drinks. There are also plenty of European market staples: cheese & dairy, vegetables & fruit, flowers. During the Christmas season some booths convert to selling the most gorgeous wreaths – I wished I could carry one home on the train!

You can also eat a packed lunch in their seating area/park, but they ask that you at least buy a drink to use their tables. Seems fair.

If you need some lighter fare after a few days of hearty German meals, I hear you. Sushi Sano was exactly what we wanted: classic sushi with a few hot dishes thrown in, in small enough servings to try a bit of everything without feeling too weighed down at the end. While it wasn’t too far from Marienplatz, the dinner crowd in the small spot seemed to be mostly students and young professionals.

Full disclosure: this place was great, but if you live in a part of the world where you can eat Mexican food all the time, skip it. We miss Mexican food, so it was a treat to find some. It was also good for that “I’m too tired to find a place to eat and don’t want to spend a fortune” brain space that we sometimes hit while traveling. La Burrita right off Marienplatz so easy to get to if you’re nearby.

These are my favorite Munich restaurants so far! I’m hoping to head back later this year, so if I discover more winners, I’ll be sure to share.