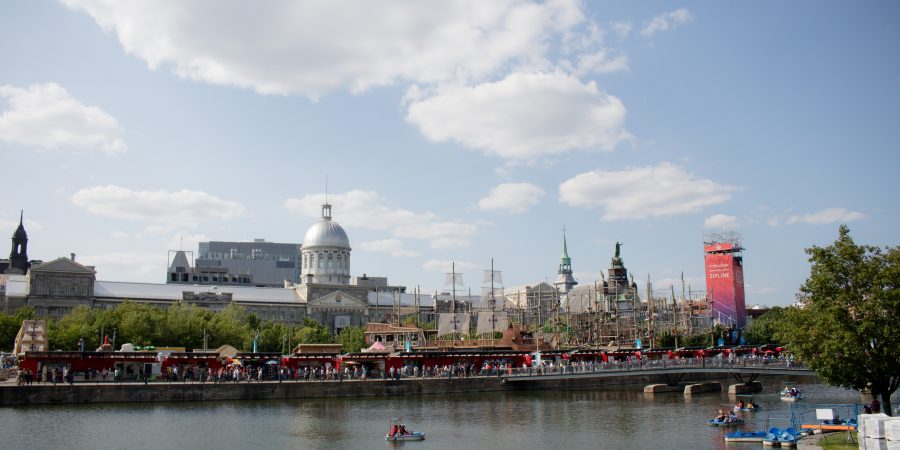 Did you know that Montreal is 375 years old this year? There’s been all sorts of celebrations and events in honor of the anniversary. My friends met up there for a long-overdue girls’ trip to check out the city! First stop? Old Port! 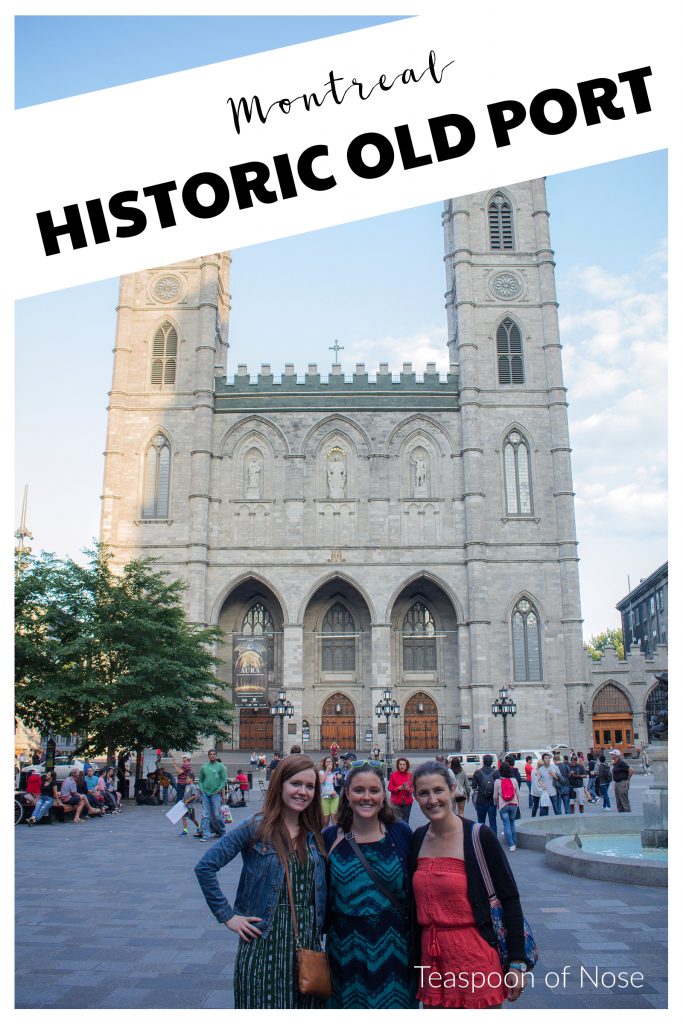 I’m going to be honest here: since this was a trip with people I used to travel with a TON and one of the women lived in Montreal, I did barely any research on the city. I took full advantage of the fact that I didn’t have to play cruise director this time! But when I checked out tripadvisor while waiting for my plane, I can’t say I learned much. A few museums, a river, a mountain. I knew there would be great food and a fun time was practically guaranteed, but I didn’t really know what we would do. Naturally, my friend Elyse gave us a ridiculously great trip, showing us her favorite parts of her city  and making us fall in love with it too!!! I’ll be sharing a lot more about our time in Montreal, but today let’s talk about Old Port. 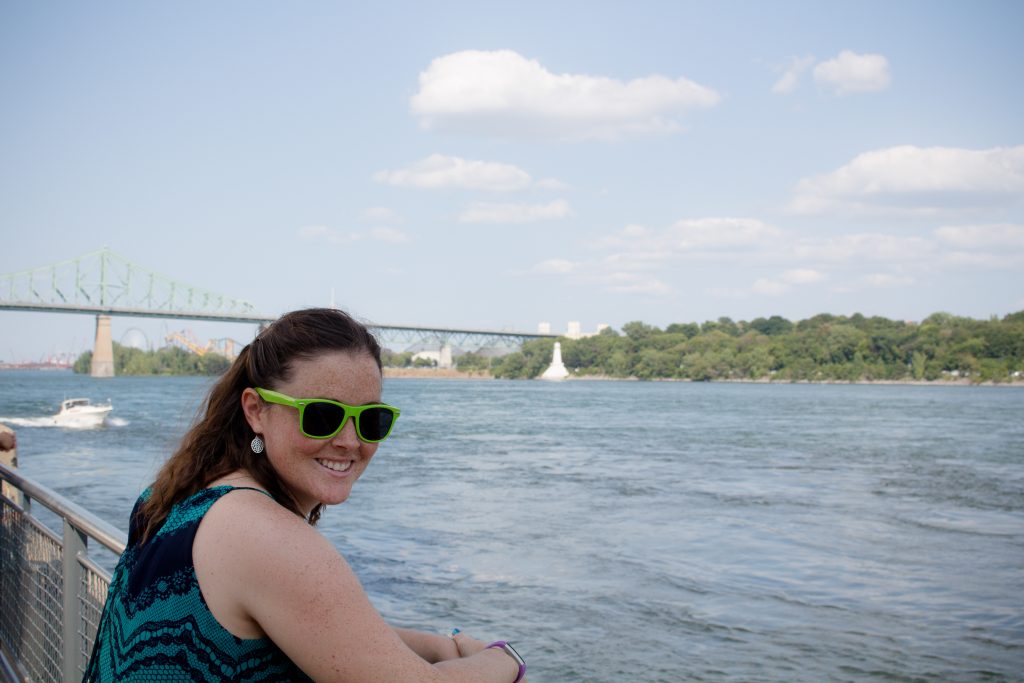 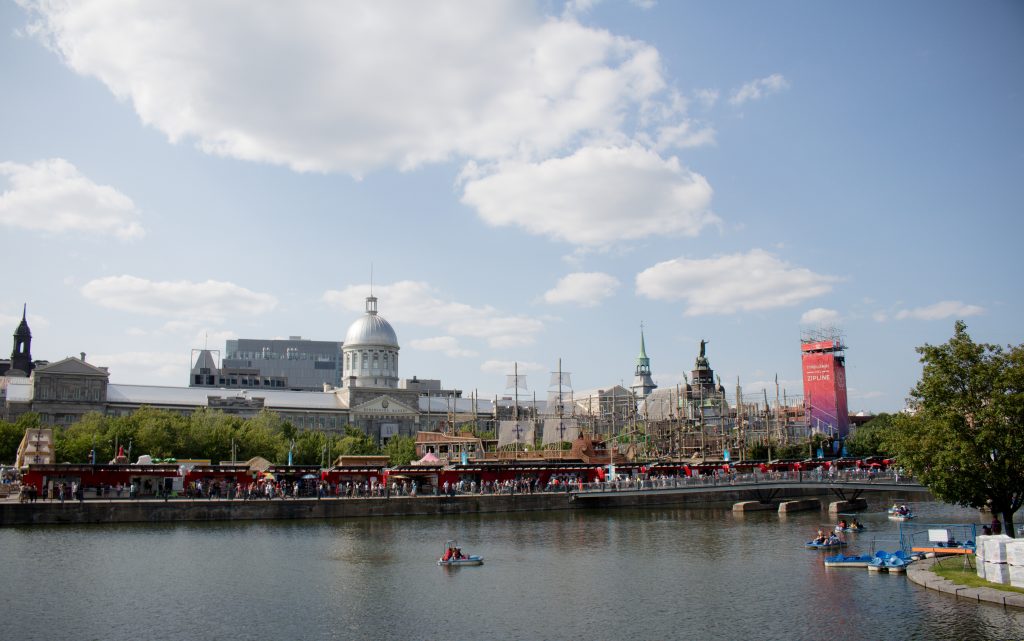 Since it’s the oldest part of the city, it seems like the best place to start. Montreal itself is an island, found where the St. Lawrence and Ottawa rivers meet. So when the earliest settlers came west along the river, Montreal quickly became a busy port town.

This part of the city has old world charm, reflecting the most European influence architecturally of anywhere in the city. Complete with cobblestone streets and ornate frontage on buildings, walking along the thoroughfares transports you to another time. Artists line squares and cafe tables spill out onto the pedestrian Rue St-Paul. While the buildings may be filled with touristy shops now, it’s not hard to picture the bustling market street of two hundred years ago. Even the historic Bonsecours Market has turned into mostly permanent stores after centuries of playing host to local market stalls, but the building itself is so beautiful its worth checking out. We mostly skipped the shopping, but couldn’t help ourselves from wandering up and down the streets! 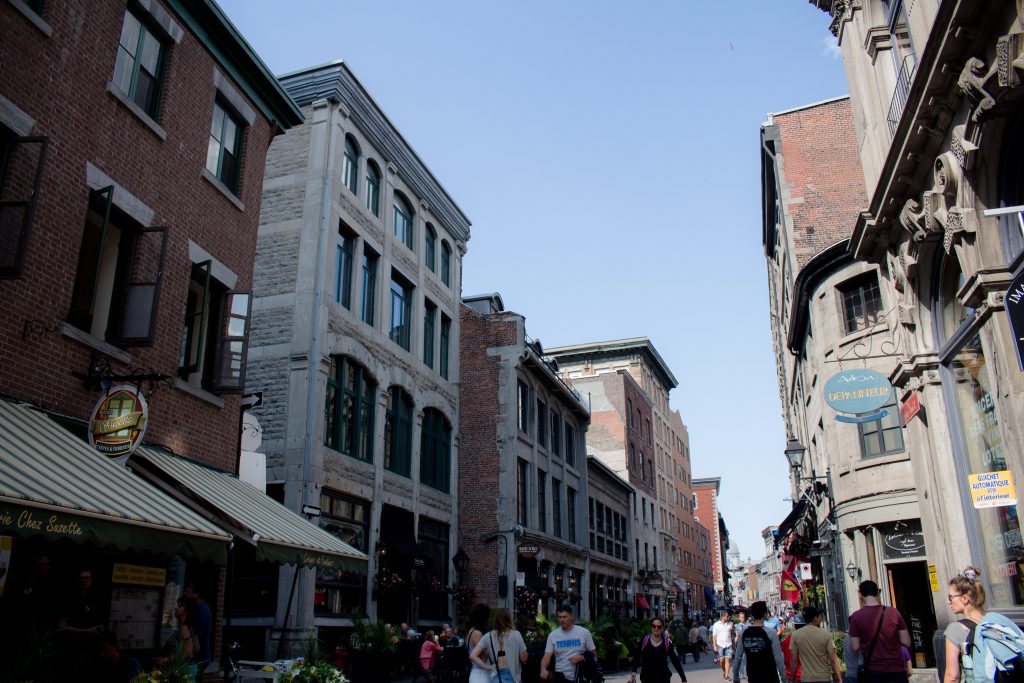 If you move towards the river itself, the scene is timeless. There’s a birdcage-looking building recalling Victorian times near the water, and this year a massive ferris wheel has been installed! It was still under construction when we visited, but it’ll offer incredible city and river views once it’s  open. A massive clock tower marks one of the major bridges on and off the island, and you can see the smaller islands along the other side of the river. One of the islands plays host to a Six Flags, so if you need some roller coasters they’re not far away! But you can’t hear the noise of it from the waterfront, making the view peaceful and relaxing. A stroll along the river is a great way to recharge if crowds aren’t your thing. 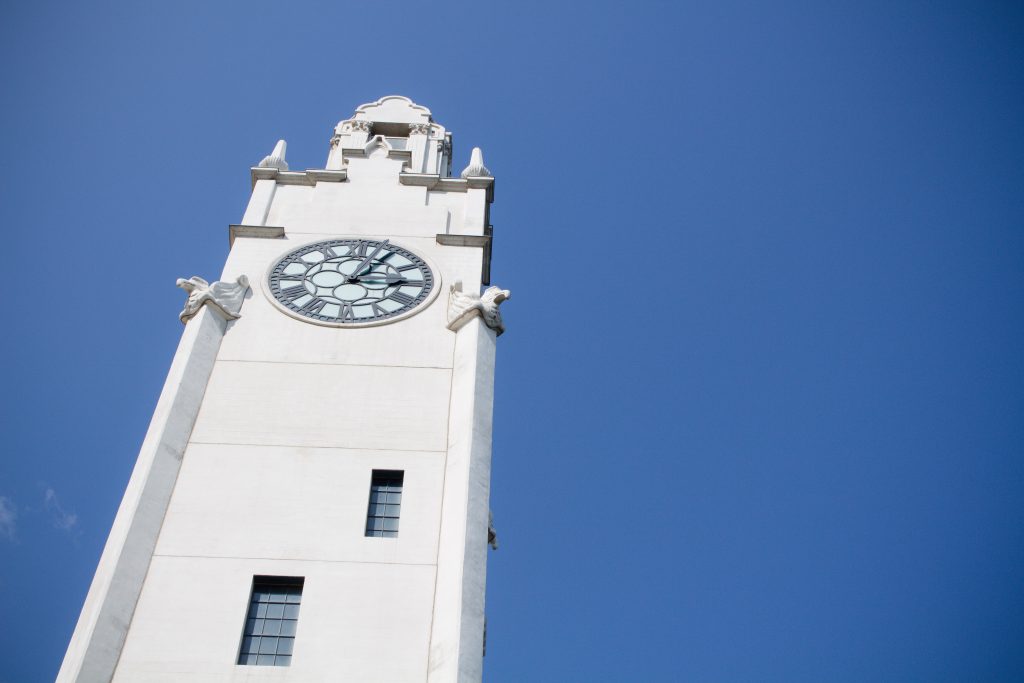 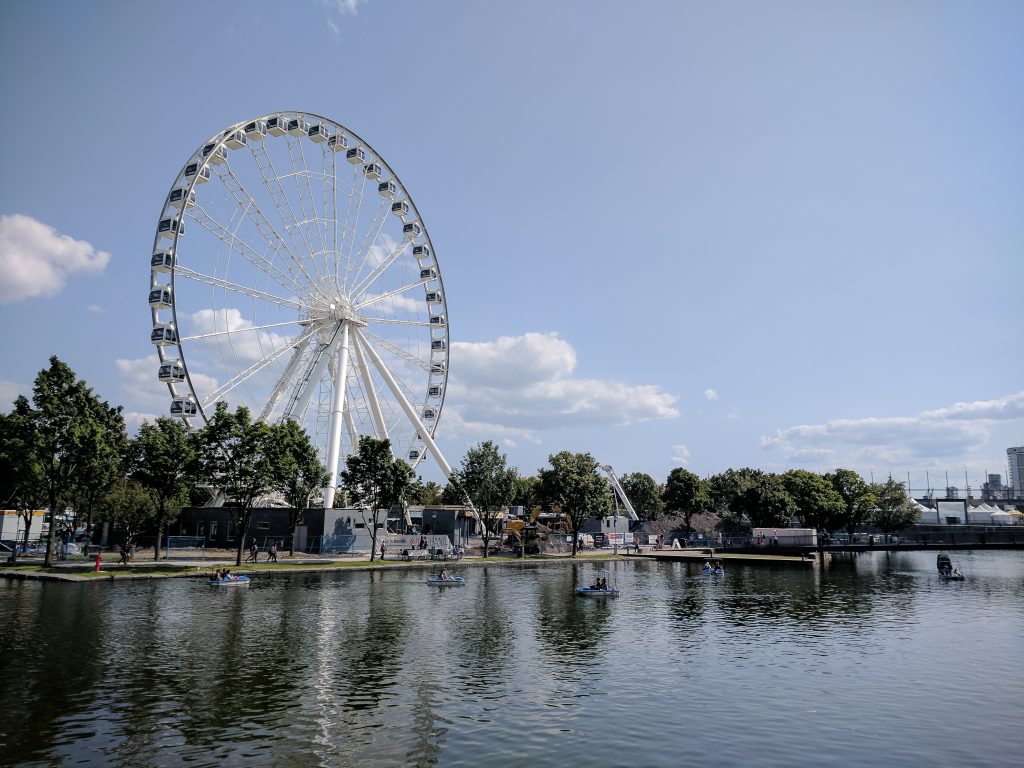 One of the great features of Montreal every summer is the festivals and events. Every weekend you can find 2-3 events going on by the water, whether culture-, music-, or education-focused. Apparently Oklahoma followed me up to the city on our visit because the main event was a rodeo! What in the world?! Needless to say, we didn’t go – I can see that at home.

Elyse tells me that each winter, the birdcage building plays host to a huge music festival. I’d love to go! But let’s be honest, I’m pretty sure I’m too chicken to do Montreal in the winter. So cold!

After centuries of commerce up and down the river, the old world architecture bleeds straight into modern corporate buildings. The further you venture from the waterfront, the more modern the buildings get. It’s one of those quintessential sights in modern cities: an ancient ornate structure sandwiched between two corporate office buildings. It’s sometimes a picturesque juxtaposition or sometimes just strange. You decide. 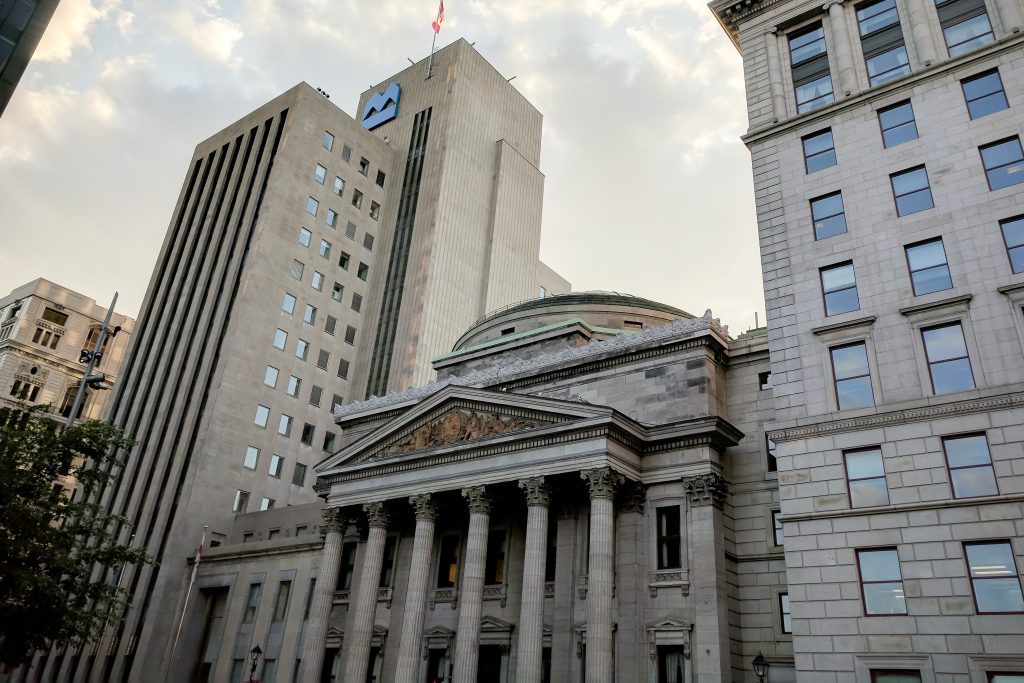 If you find yourself over here, one of the biggest tourist attractions in Montreal is the Notre-Dame Basilica. The biggest cathedral in the city, it’s apparently stunningly beautiful inside. I say apparently because we skipped it. Gasp! No, we did it for a reason: there’s another one!

Instead of touring the Basilica, we headed just two blocks north to the smaller but older and free-to-tour Notre Dame de Bonsecours Chapel. Signs are quick to point out that this church predates its more well known sister, and is stunning in its own right. I’m a little bit obsessed with cathedrals: so much history, so much art, so much story depicted. We spent a few quiet moments drinking it all in, and if you love that sort of thing you shouldn’t miss it! 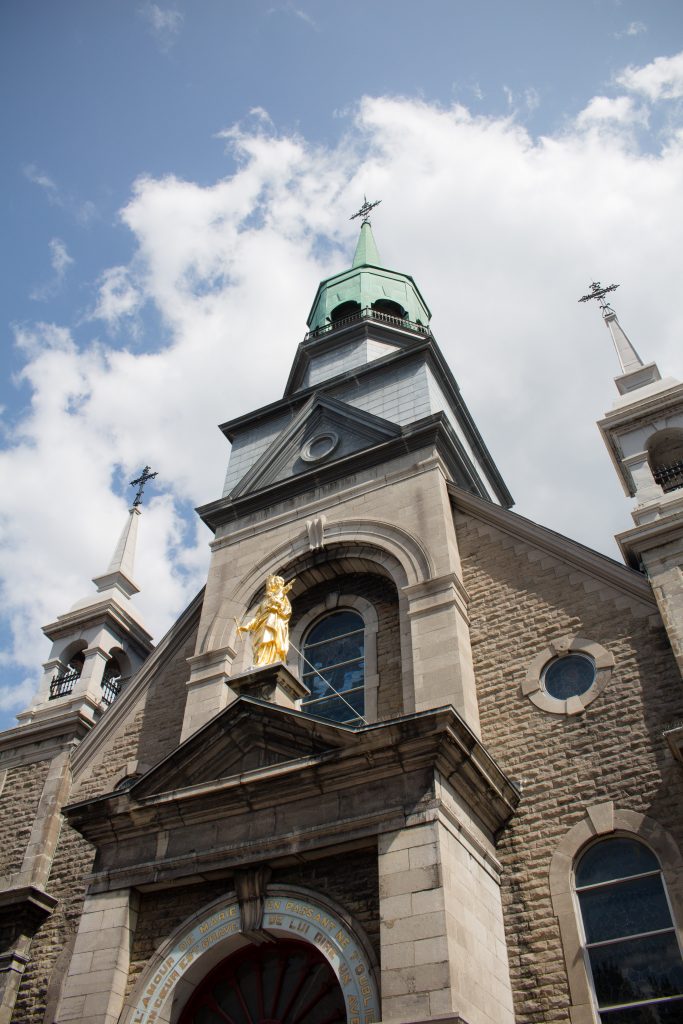 Another great feature of the Old Port neighborhood is the Pointe-a-Calliere Museum. An architecture museum at heart, but its temporary exhibits tend to stray more into the realm of culture and anthropology. During out visit, the two major temporary exhibits covered the peoples of the Amazon river region and the history of Bell Telephone Canada. Both were fascinating, and the phone exhibit was chock full of pop culture. I definitely found my dad’s first cell phone on display!

But the real reason to visit is for the permanent exhibit. They set up a museum around the ruins of the several buildings that have held that same piece of land for the past 375 years. You can walk among the foundations, learn the history of the Montreal, and even see how and why each change in structure took place. My favorite part was that everything show there hadn’t been moved: the foundations we saw had been excavated and the current building created around them! If architecture or history holds any interest for you, this place is definitely worth checking out. 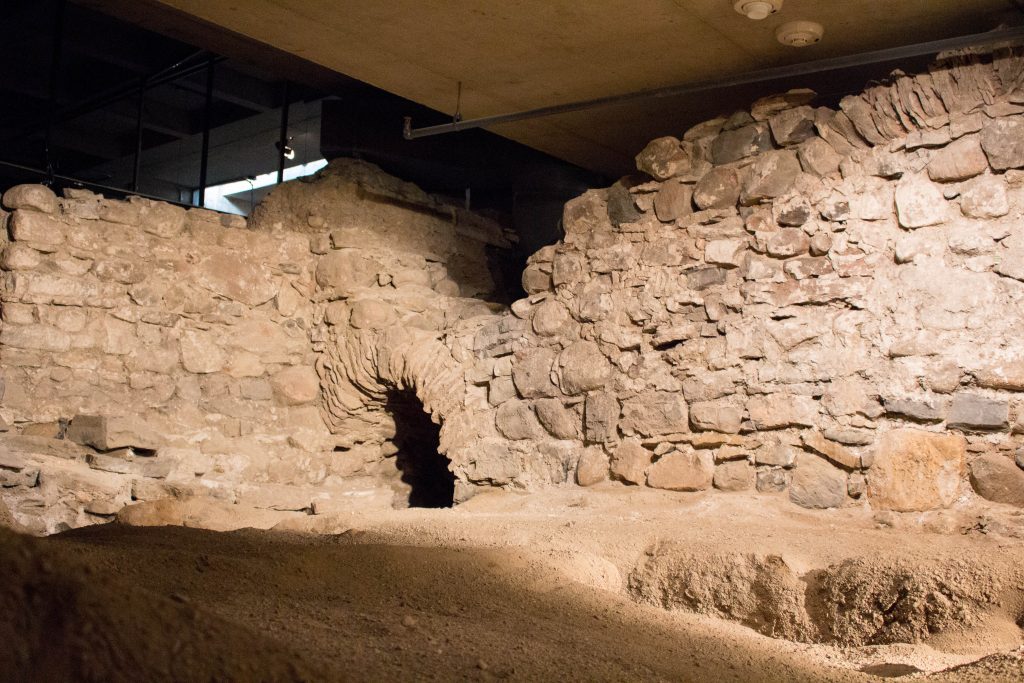 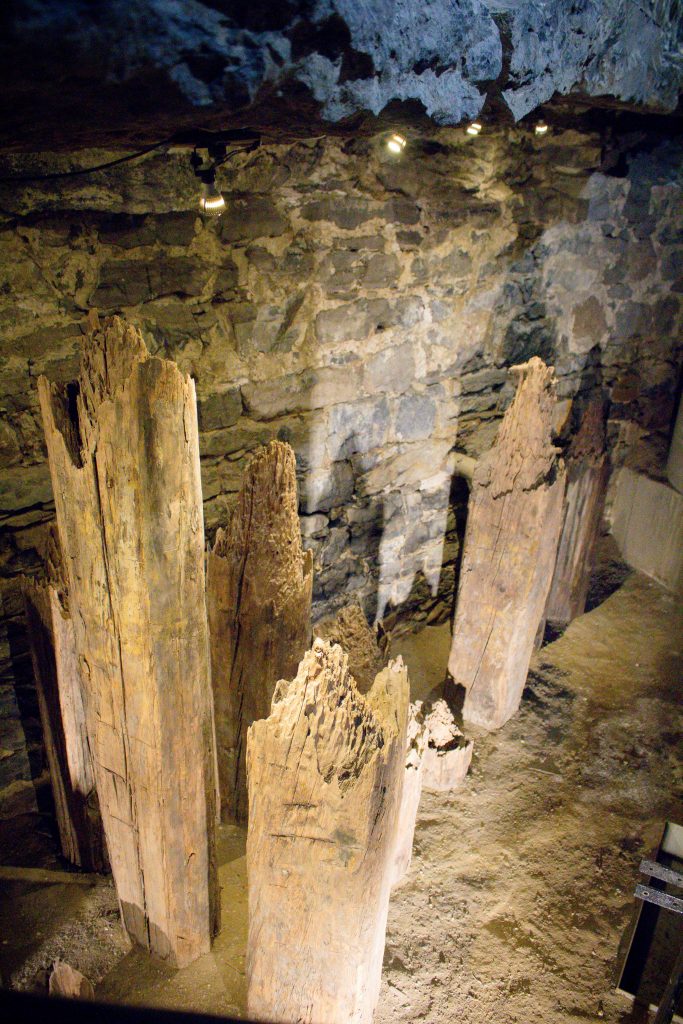 This is just part one of our Montreal trip. Check back soon for my next Montreal post, where I’ll be sharing some of my favorite bits of exploring Mount Royal!