Nashville is a fantastic city for a weekend road trip! Here’s a few of the must-do’s in Nashville, Tennessee. 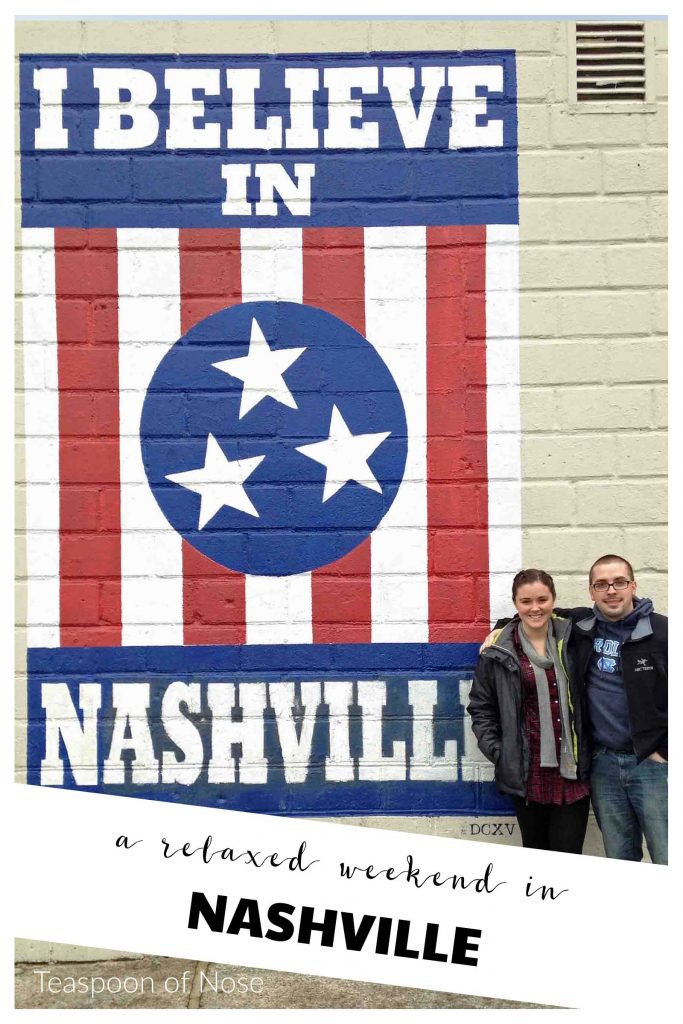 This winter, my husband and I took a road trip through Tennessee. Neither of us had seen much of the state, and we wanted to take advantage of both of us being on academic schedules to take a 10 days to drive across the NC and TN. The first half we spent with family in western North Carolina, celebrating Christmas, catching up with family, and getting to hang out with the newest member of the family: our niece!

After fun with family, we set out for destination number two: Nashville! Now, neither of us had ever spent time in Nashville, so everything was new to us.

A quick confession: at this point in my life, my travel M.O. is pretty laid-back. I do enough research to know the best way to get there and book housing. Maybe the bare minimum of research on things to do, usually in the process of deciding where to go in the first place. Life is full and crazy and a little hard right now, so planning ahead on vacations is a little more than I can handle.

So our time in Nashville wasn’t quite the whirlwind travelling excursion. We saw a couple of the highlights, but also prioritized sleep and downtime while we were there. It was so nice to have time which was unclaimed, neither by a long list of touristy things nor by the inevitable to-do list that seems to follow me around as an inevitable part of being an adult apparently. We spent a whole afternoon just reading, listening to music in the cute place we stayed.

We arrived in late afternoon, so we went straight to our housing to settle in. We found it on Airbnb, which is a great housing alternative to hotels or hostels. For half the price of a hotel, we had a cute room with attached bathroom. It was separate from the rest of the house and had parking right outside the door. the owner was really great – we met her briefly, and she also made getting in and out easy. There was basic kitchen tools plus a hot plate, coffee maker, and mini-fridge, as well as wifi, books, and bus schedules all waiting for us when we got there. If you haven’t checked out Airbnb yet, you should. This was our first time, but I’ve heard lots of good things from friends, and I definitely agree!

After settling in, we caught the bus into downtown. In hindsight, riding the bus made life more complicated for us that weekend. Nashville buses run like spokes on a wheel out of downtown, once an hour. So it’s worth the money saved on parking, but also just took a lot of time to plan around the buses. 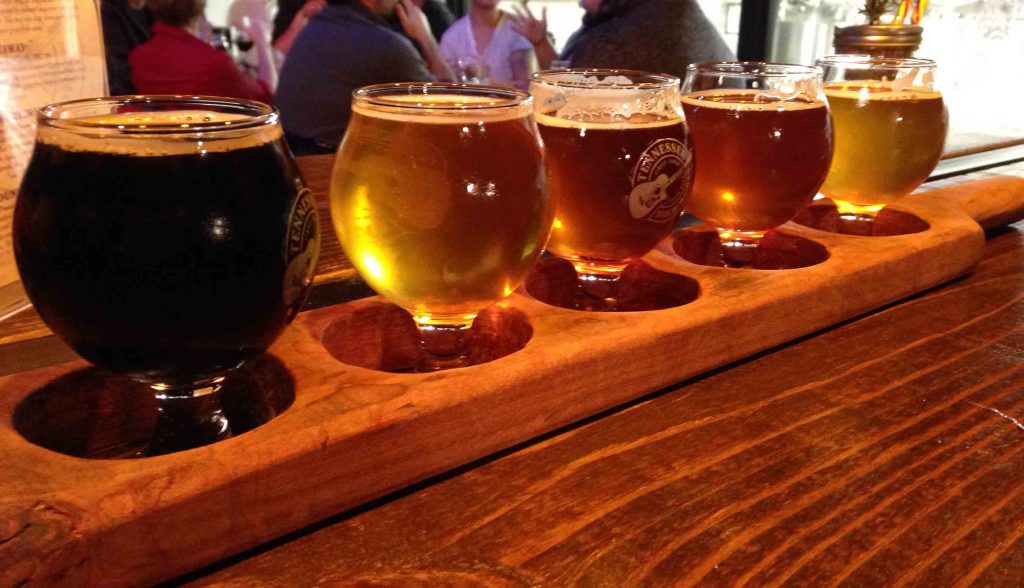 First, we went to Tennessee Brew Works! On a rainy Sunday night, it was pretty quiet. But still a good vibe. We got a sampler to share, and the beer was amazing. I’m a big fan. There were some really unusual ones too, most notably the Basil Ryeman – such a weird flavor for a beer! But so good! Also, cute glasses. I wanted to take one home.

For dinner, we ate at Rock Bottom. It’s right on Broadway, the main touristy drag. It was fun to walk down and see all the sights, but it’s mostly smoky bars, tourist shops, and cowboy boot stores, so we didn’t spend much time there. But the burgers and beer was great, especially after a long day of driving and exploring! 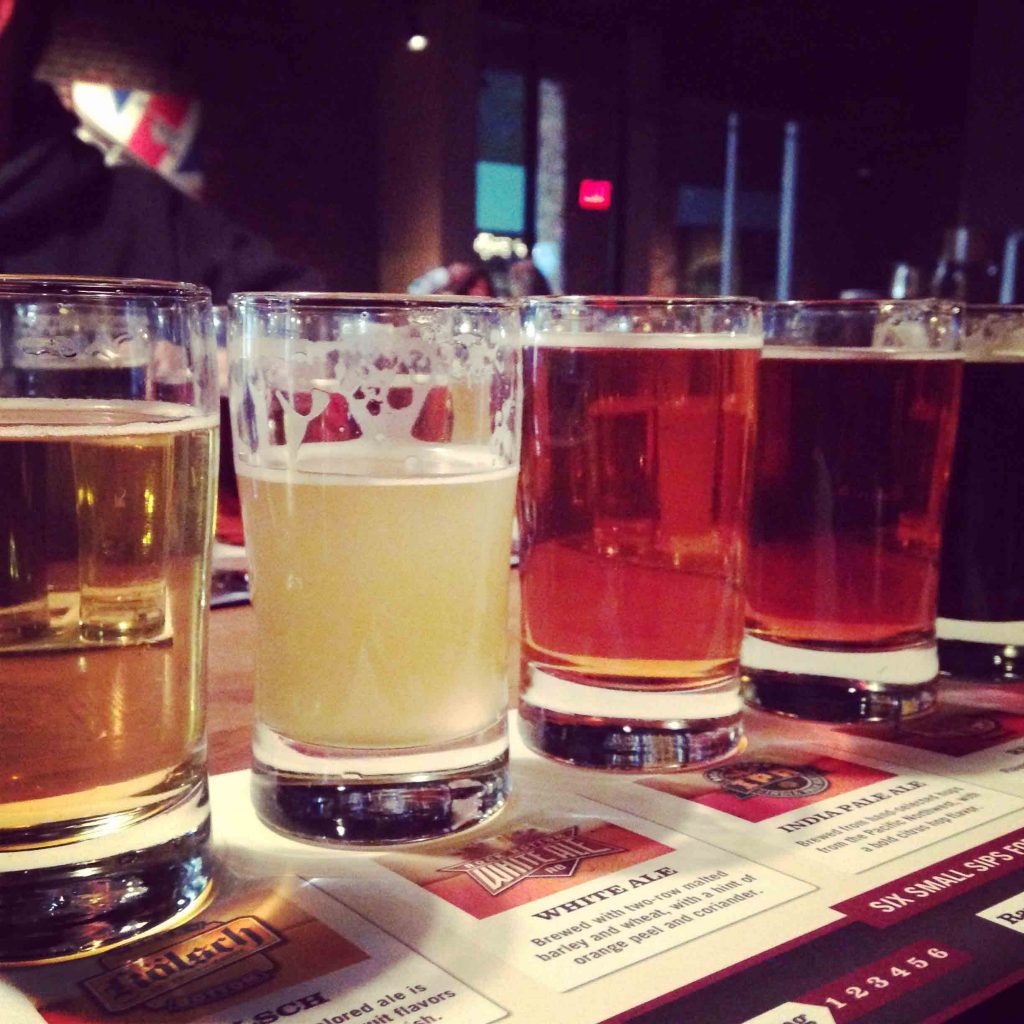 The next morning, we headed backdowntown to do some sightseeing. Nashville has a TON of things to do, more than we could possibly experience in 48 hours. But with a short window and also wanting to prioritize rest, we decided on two main events. First was the Country Music Hall of Fame!

I really like country music, and my husband likes mostly old school country artists, so the museum was a good fit for both of us! We really liked the exhibits on classic country and it’s formation. The Kenny Rogers exhibit cracked me up – well, most of the exhibits with outlandish concert/music video costumes made me laugh. So. Many. Rhinestones.

Also, the building is architecturally beautiful. The exterior is cool and unusual and recognizable. The inner layout was also great: I love when museums nail their exhibit setups with good aesthetics and exhibits that use space well.

After that, we checked out the Ryman Auditorium. Pro tip: the current Grand Ole Opry space is closed in the winter, so we couldn’t check that out. But the Ryman is open for tours year-round in addition to hosting concerts and the Grand Ole Opry show during the colder months (not sure why – lack of tourism dollars to keep both open?). But either way, the Ryman was really cool. The building itself has a pretty funny story origin story, involving a guy protesting a revival ending up meeting Jesus in spite of himself, and then becoming a financial backer for the pastor. The space began hosting performances in the early 1900’s, and ended up evolving into the Grand Ole Opry show. (Not a very informative summary, I know. Just go visit!) The space is absolutely beautiful. I really love old church buildings, whatever style of architecture – there’s something about the beauty of a sacred space that captivates me.

Unfortunately we didn’t get to see a show – there wasn’t anything happening the two nights we were in town. Guess we’ll have to go back next time! But they were setting up for something while we explored and it was fun to watch the crew get ready.

After spending the morning downtown, we headed south of Nashville for some Edley’s Bar-B-Que! A friend lives in town and he told us that Edley’s was not to be missed, and he wasn’t lying! Seriously, some of the best bbq I’ve ever had. Logan got the hot chicken (another Nashville staple), and I had pulled pork, and both were delicious. I also really liked the sides – cornbread is the ultimate comfort food. 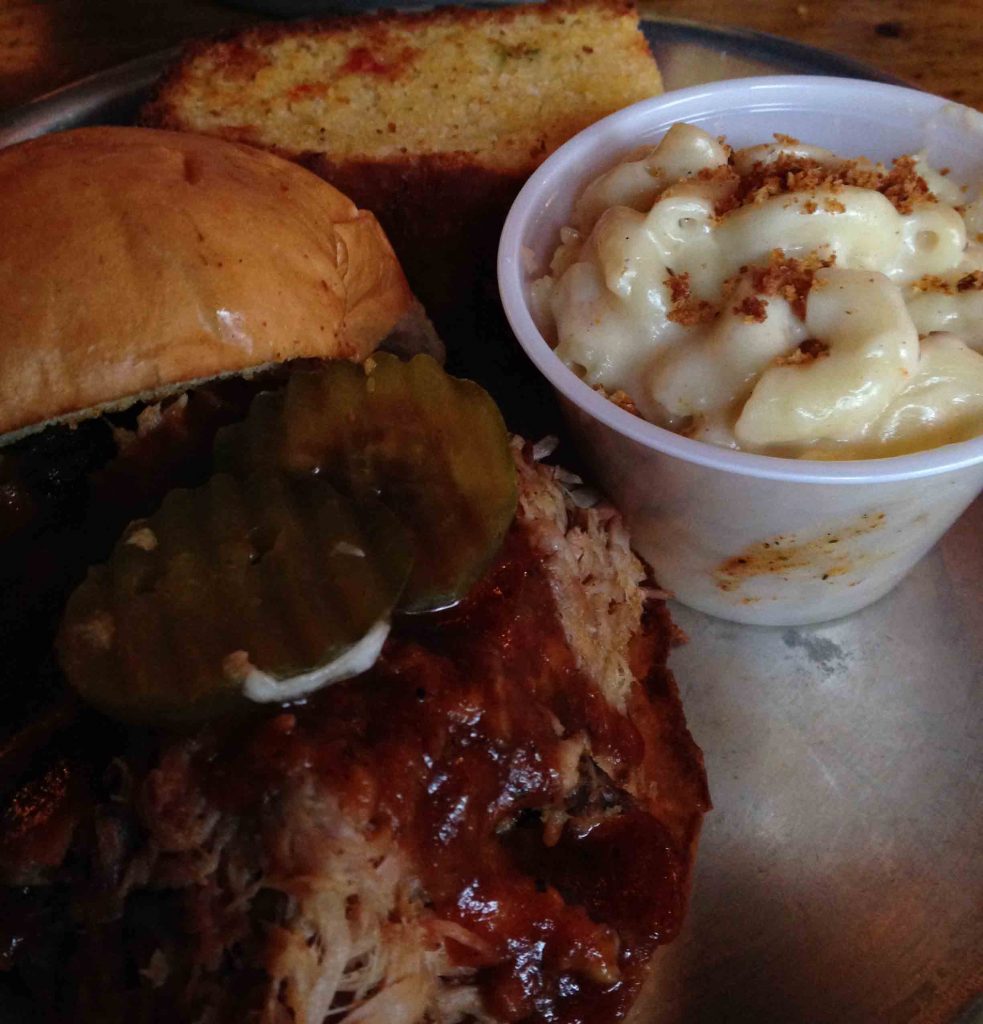 Confession: it was so good, that on our way home from Memphis (the final leg of our road trip) we detoured throughNashville just to eat at Edley’s again. It was THAT good. So if you’re headed to Nashville, go get some.

In summary: there’s way more to do and see and eat in Nashville than we had time for. We loved what we did, and we’ll have to come back for more soon!

Be on the look out for a post about the last leg of our road trip: Memphis!

6 thoughts on “Roadtripping to Nashville, Tennessee”