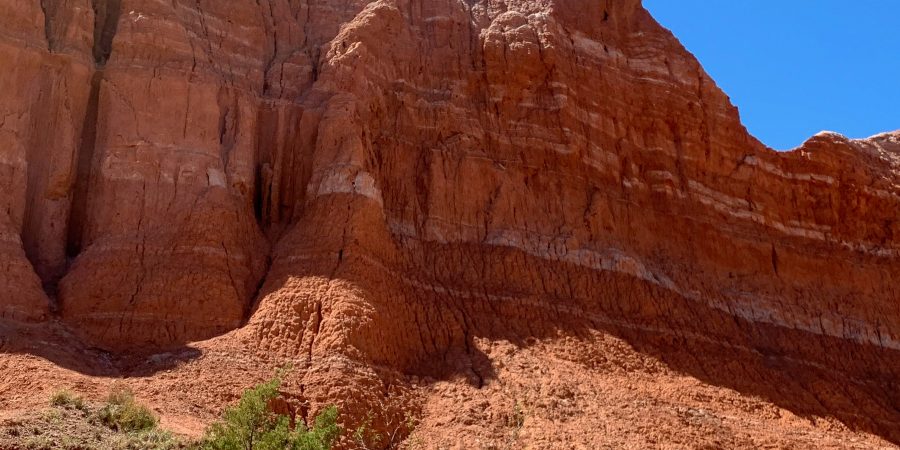 While not well known, Palo Duro is actually the second biggest canyon in the United States after the Grand Canyon.

Like the Grand Canyon, the layers of rock laid bare in the canyon walls is striking. Palo Duro Canyon has much more greenery than its big brother but still has very much a desert ecosystem.

The best thing to do to see the canyon is on horseback! There are a few companies just outside the park, but Old West Stables is situated inside the canyon itself. For $50 a person, you can ride a horse through the canyon and get unique views of the canyon on horse-only trails.

Like so many of these companies, their horses are so well trained that you don’t need any horse experience to ride. They basically follow the one in front and leave you free to enjoy the views!

I rode Buddy, who was lucky enough to be given a feedbag for the walk – apparently otherwise, he’d constantly stop to graze on the trail. 😉 He and I got along just fine and I definitely enjoyed the cheesiness of saying “whoa, Buddy” constantly.

The ride and relaxing, leaving you to soak up the beautiful views. You’ll spend most of the time looking up on either side, trying to count the layers in the canyon wall or taking in just how many shades of color you can see.

Do it in the morning, before it gets too hot. And wear jeans.

If you only do one trail, the Lighthouse Trail is your best bet. It’s about 3 miles one way, taking you around their most recognizable rock formation known as the Lighthouse.

There’s something gorgeous about that bright blue sky contrasting with the orange/red of the rocks, broken up by striking white layers, along with the deep greens of the trees and the lighter greens of plants and cacti peeping up. It’s a landscape I’ll always associate with Texas and western Oklahoma.

The trail ends in a shady seating area, perfect for taking a break before making the return journey. You can scramble your way up to itself, but there’s not a real trail and watch out for cactus spines as you climb.

Be aware of the temperatures and bring plenty of water! We hiked in late April and by mid-afternoon, temperatures had already hit 90°F. During our two hours out there we saw two groups of people hauled out by park rangers for overheating/dehydration. Plus, it’s desert, so there’s very little shade.

What Else to See

The other trail most worth noting is the CCC trail, which descends from the Visitor Center on the rim down to the canyon floor and then back up. It takes you over several of the bridges built by the Civilian Conservation Corps (CCC), who carved out most of the trails and infrastructure in the park during the Great Depression. While it’s only 2.7 miles each way, it’s one of the most strenuous of the whole park.

Another little-known part of Palo Duro is slot canyons. Everything I read implied that you need a local to show you the way. We didn’t get to explore this, but it’s on the top of my list for next time!

While Palo Duro Canyon is a little off the beaten path, it’s one of the most underrated parts of Texas and worth a weekend trip. Check back next week for recommendations on where to stay and eat in nearby Amarillo!