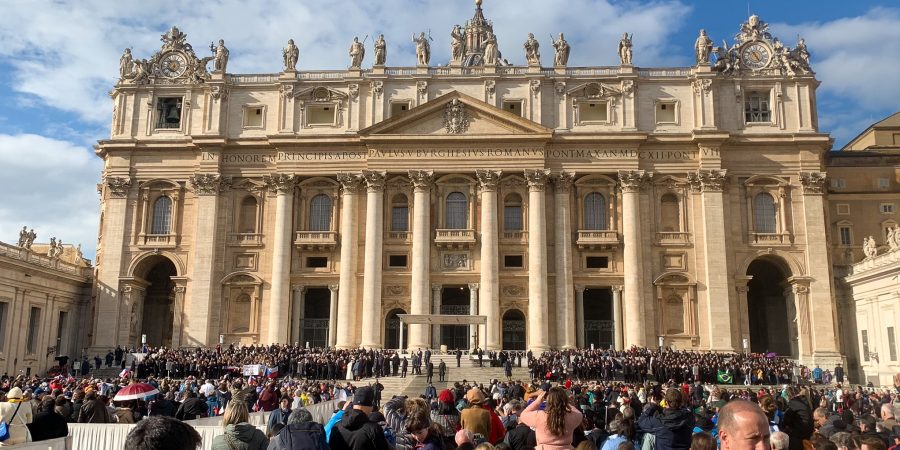 Whether or not you’re Catholic, attending a papal audience is a once in a lifetime experience. So here is what you need to know to get the most out of your visit!

When a friend who was raised Catholic came to visit, the number one thing he wanted to do was attend a papal audience. I had never really thought about that and had no clue how the process worked.

Turns out, it’s not that hard to do. Nearly every Wednesday, the pope speaks to an audience of thousands, and it’s free to attend. So with a little planning, you can attend a papal audience on your visit to Rome too!

How to get Tickets to a Papal Audience

First off, if you want to get tickets in advance, you need to have 10 or more people. It’s a bit of a confusing process and involved faxing. I didn’t go through it, so I’ll just refer you to the Prefecture of the Papal Household for instructions.

For those of us trying to go in groups smaller than ten, it’s not actually hard, just a bit confusing. You’ll need to be in town the day before to pick up tickets in person. I had a group of three and the guy let me have them without my friends present, but I’m not sure if they’ll always do that, so don’t risk it if you can help it.

All you have to do is find the massive gate, called the Bronze Door, on the east side of the Vatican complex. The easiest way to describe it is that it’s the only gate open to cars between the outside of St. Peter’s Square and the Vatican Museum entrance. On a map, the road leading to gate is Borgo Pio.

Once you find it, go to the guard on the left side doorway if you’re facing the gate. Ask him for tickets for the papal audience and he’ll hand them over.

Sounds simple, I know. But I had a hard time finding an explanation, and the various employees couldn’t always answer my question, so I wanted to make it as clear as possible for when you go!

One other thought: if you’re going with a Catholic group, I would reach out to your local diocese and see if they can help with the process. It seemed that the vast majority of those in attendance were groups from a church or diocese.

The Day of the Papal Audience

Definitely plan to get there early. They open the security at 7:30 AM to have everyone go through, which takes forever. Be patient; since people are visiting from all over the world, there’s a 100% chance that there will be some cultural miscommunications on how to line up, if personal space matters, and what a line even means. No one was trying to be rude, but everyone’s in a hurry to get a good seat and wants to get in, so expect to be nudged and jumped in line a bit.

We opted to arrive around 8 AM and got through security by about 8:45. By the time we made it through, there were still plenty of seats available and we quickly grabbed a few about halfway up and near the middle aisle. We visited both on the offseason (November) and in a slight drizzle, which definitely meant smaller crowds than you’ll find in the height of summer. That being said, we estimated between 8,000-10,000 people in attendance on our particular Wednesday.

You’ve still got some downtime to wait amongst nearly every language on earth, and there’s a definite buzz of excitement in the air. During that time, though, they show the pope blessing and meeting special guests on the big screens and offer recognition to the larger diocese and community groups that are present in at least five different languages.

Somewhat without warning, the Popemobile appears in one corner of the square. The crowd yells and screams – this is, after all, why they’re here. Pope Francis waves, smiles and kisses the babies lifted to him by specially appointed employees walking alongside the car. Now I understand why the aisle seats were the first to fill up. People are excited but patient, and thirty minutes pass in this way. He manages to go up every aisle except one, which seemed pretty impressive to me.

After Pope Francis took his seat, he began a short homily, in Italian of course. I’m excited to share I was able to understand most of it! He spoke on Acts 18, about Priscilla and Aquilla’s taking in of Paul in the early days of his ministry. He talked about the way that the power of the church begins in our marriages and in our homes, that hospitality is a very tangible way to spread the peace and unity of Jesus. He pointed out that the initial connection between the two men was their field of work, but that’s all it took to invite Paul into their home and their lives.

After he spoke, a summary was offered in about 5 other languages. He then offered a specific mention of the Czech people in attendance that day, because it was the 30th anniversary of the canonization of Agnes of Prague. He closed by offering a blessing on everyone, with special notice of the old, the young, the sick, and the newly married. He also prayed specifically for several current events in a few countries.

After the audience was completed, I think you could’ve taken an item to the front to have it blessed by the pope. We neither brought items nor wanted to wait for that, so we skipped it.

My Thoughts of the Experience

The entire process was very moving. Pope Francis seemed genuinely enjoying the waving and baby-kissing portion, not just doing the bare minimum or putting on a show. I also thought that his message felt very approachable to anyone listening – you didn’t have to be a Bible scholar to follow his talk.

It seemed like everyone was mostly respectful, in a way I’ve never seen in large crowds – especially multicultural crowds. When a Portuguese grandma got separated from her family during the rush to get close to the Popemobile, people were happy to help her get through as we all returned to our seats.

I also witnessed a woman who ran beyond the barricades in an effort to get to the pope, clearly trying to get him to bless a paper in her hand. While security was quick to stop her progress and hold in her place, they were surprisingly gentle with her. They talked to her, found out what she wanted. When she fought their efforts to lead her away, they talked some more and eventually took her paper away (with her acceptance). After five minutes, they returned with it – it appeared that they took it to where the Popemobile was, got it blessed, and gave it back to her. They still escorted her away, but it was done without force and very respectfully. I was impressed by that as much as anything that day.

All of that being said: it was Very Very Crowded. We were there in drizzling rain, and people didn’t much care if their umbrellas blocked the views of those behind us. It felt a bit like going to a concert and getting the seats where you mostly just watch the jumbotron, and our seats were only about halfway back from the platform.

So if crowds make your skin crawl and waiting makes you angry, this is probably not for you.

Overall, I’m so glad I had the chance to attend a papal audience! But it’s probably a once in a lifetime opportunity that I don’t need to repeat.

What’s a unique travel experience you want to have? Let me know in the comments!