Our first weekend in Oklahoma, some friends invited us to go hiking. We weren’t sure what that would be like, since everything you can see is farmland. But Lauren & Austin grabbed their dogs and took us to Quartz Mountain State Park! 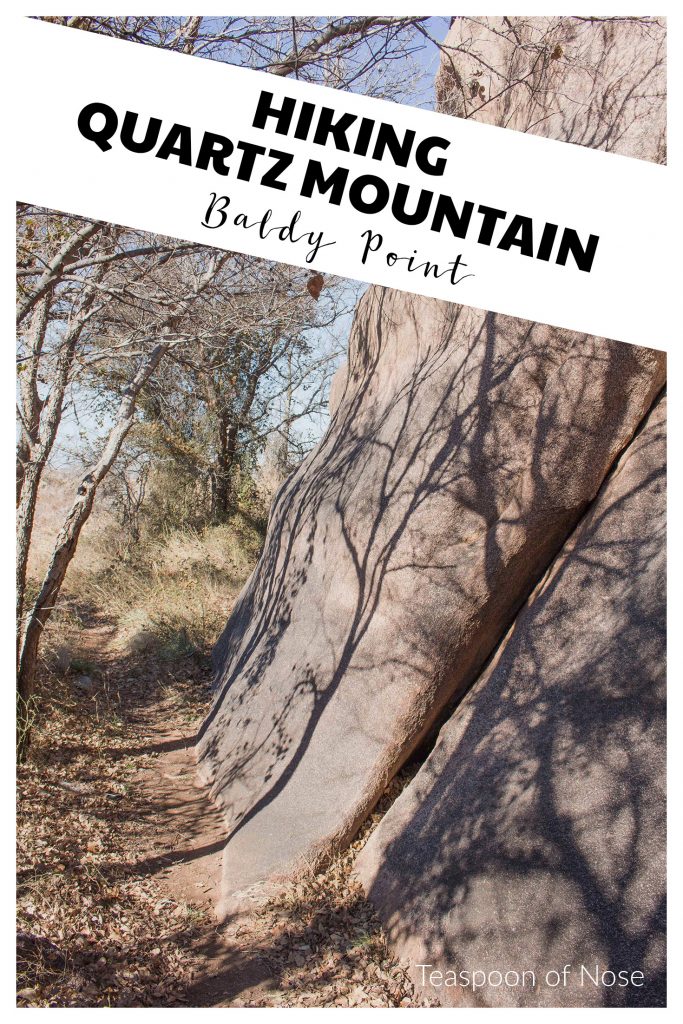 Now, southwest Oklahoma is flat. FLAT. And largely devoid of trees, except for the scrubby ones that grow near streams. It’s almost entirely  farmland dotted with small towns. So it was such a change of pace to climb up rocks and around trees!

Technically we explored Baldy Point, a separate part of Quartz Mountain State Park with its own entry. It’s a popular climbing spot, apparently similar type of climbing to Yosemite. Maybe I’ll have to get into rock climbing while we’re here! 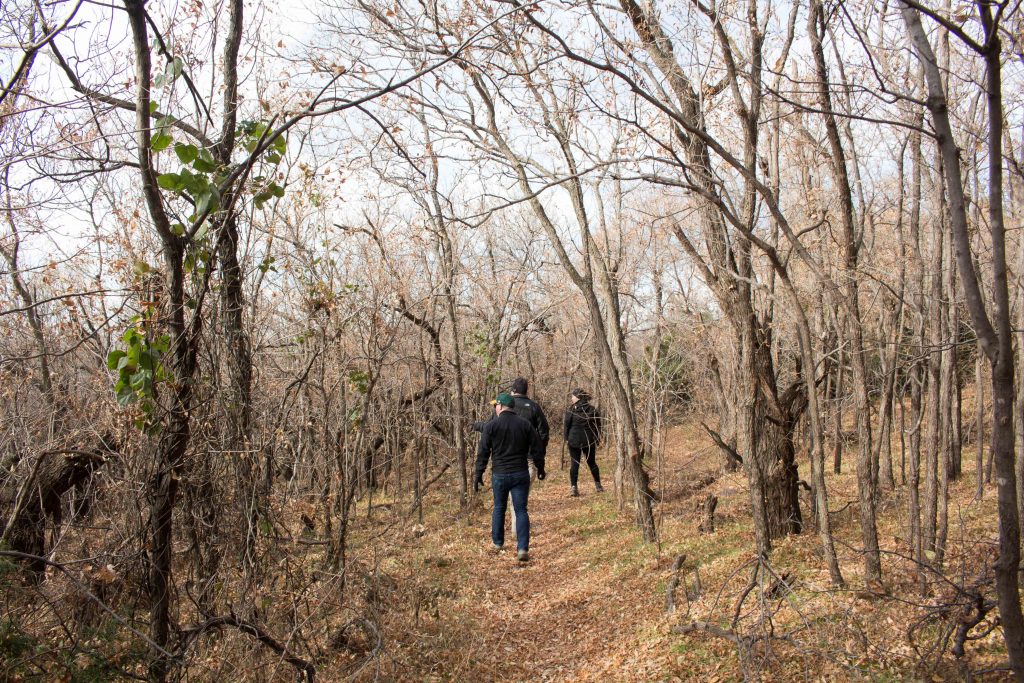 The hike wanders around the base for a bit before turning up the side. It’s not long, about 45 minutes each way. Once you leave the trees, the trail gets pretty vague, but it’s just rocks and plains grasses so don’t worry too much about it.

The view from the top will surprise you – farmland spreads for miles. If it wasn’t so bitter cold, it would be the perfect spot for a picnic at the top. Maybe this spring. 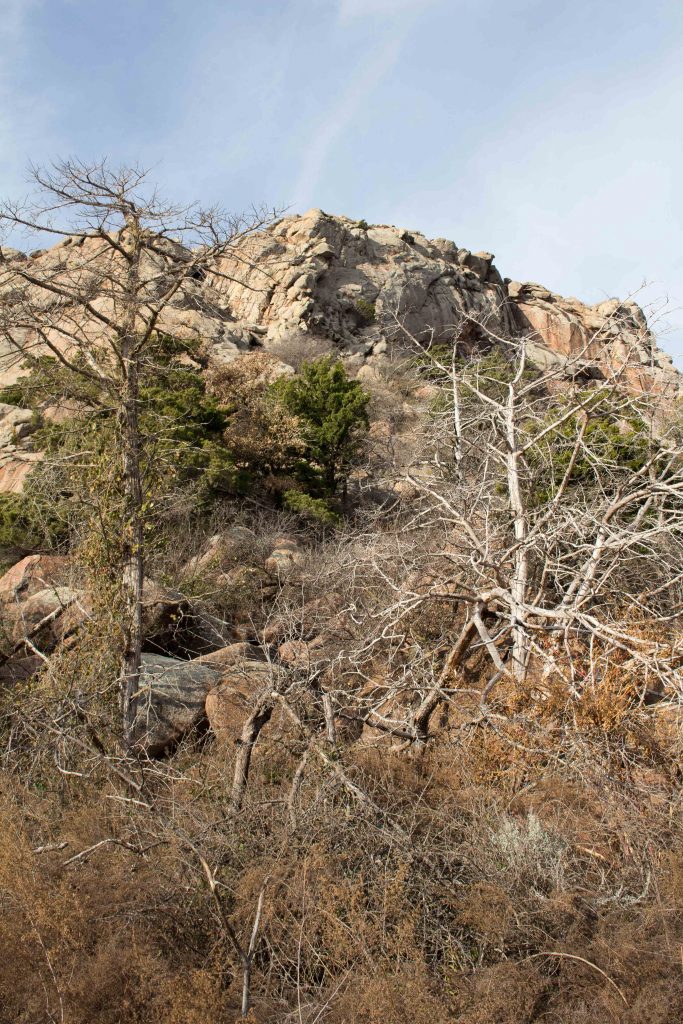 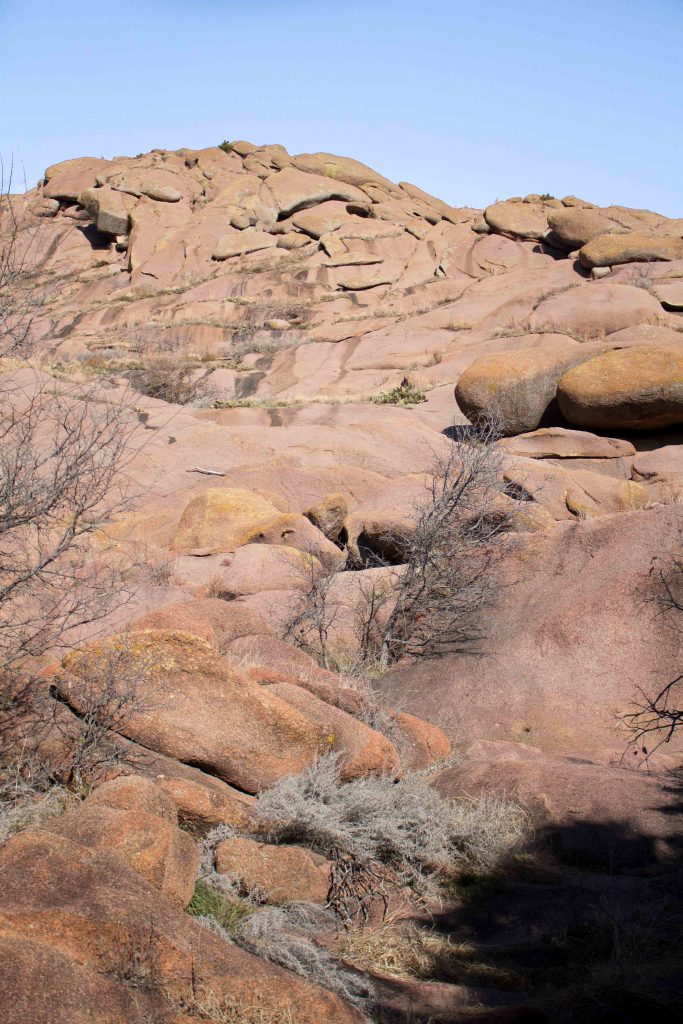 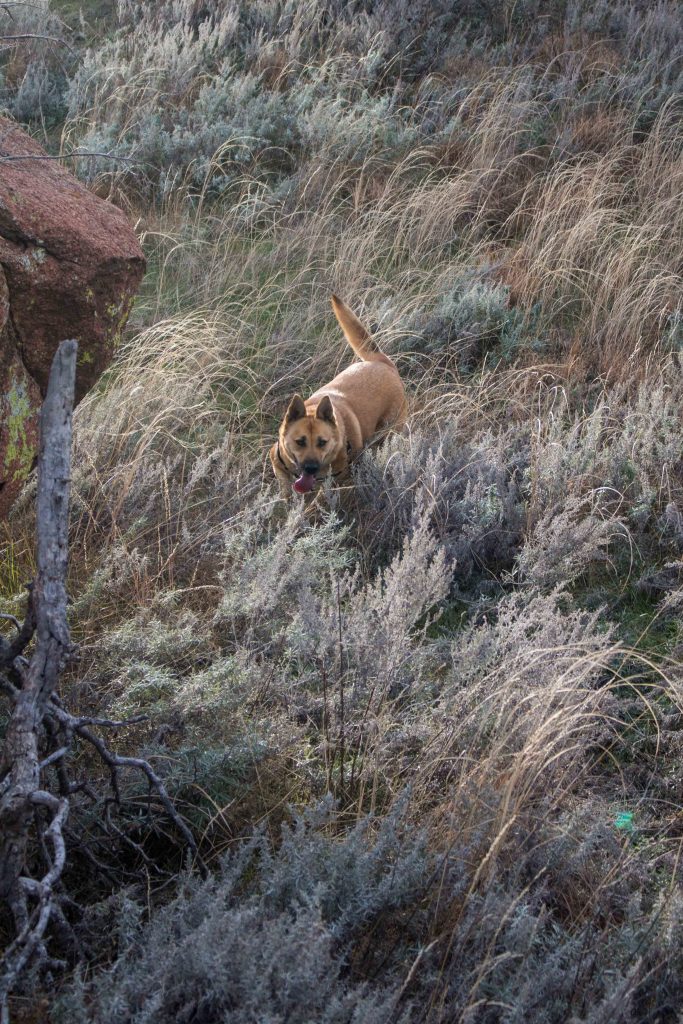 One thing that has surprised me most about this part of Oklahoma is the colors. The biggest difference is the sky: it spreads out around you for miles. Ninety percent of the time it’s a stunning blue, and the other ten is a layered dramatic gray as clouds race across the sky. It creates a striking contrast against the blinding tan of the swaying grass. But on the mountain, the orange rocks and the nearly neon green of the moss. The valley alongside the mountain had a forest fire a couple years ago, and the result is a field of charred trees, offering contrasting grays and blacks against the bright skies. 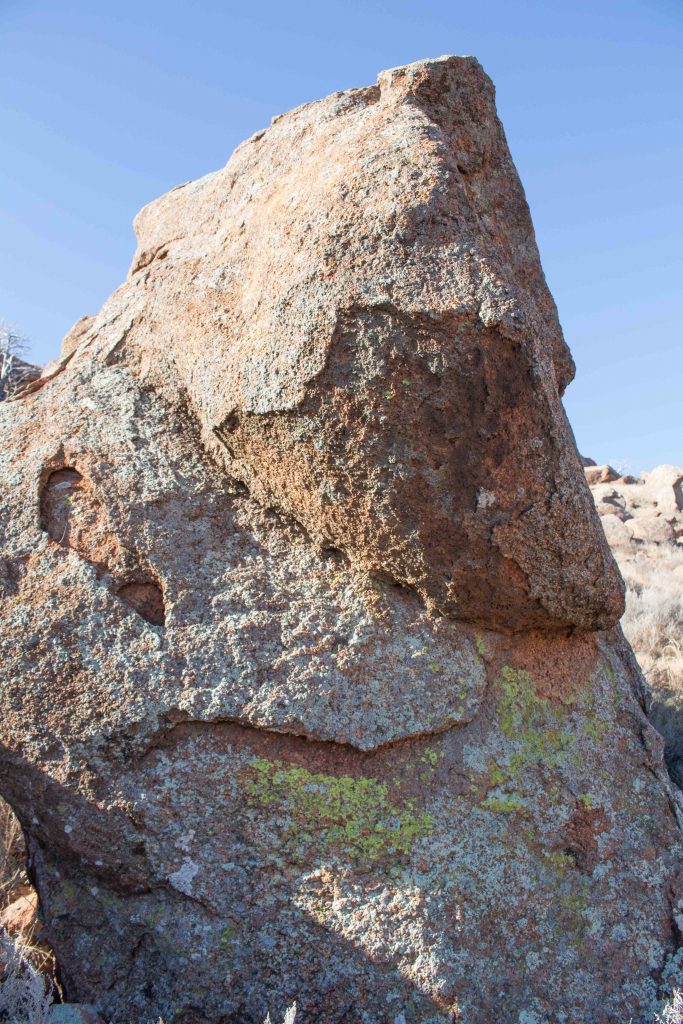 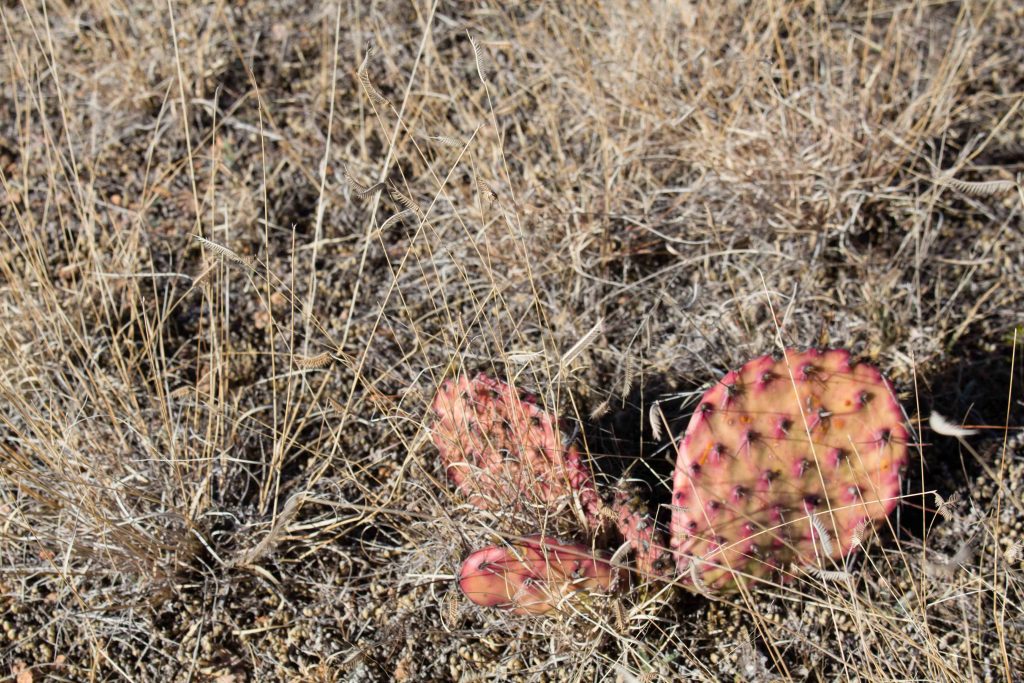 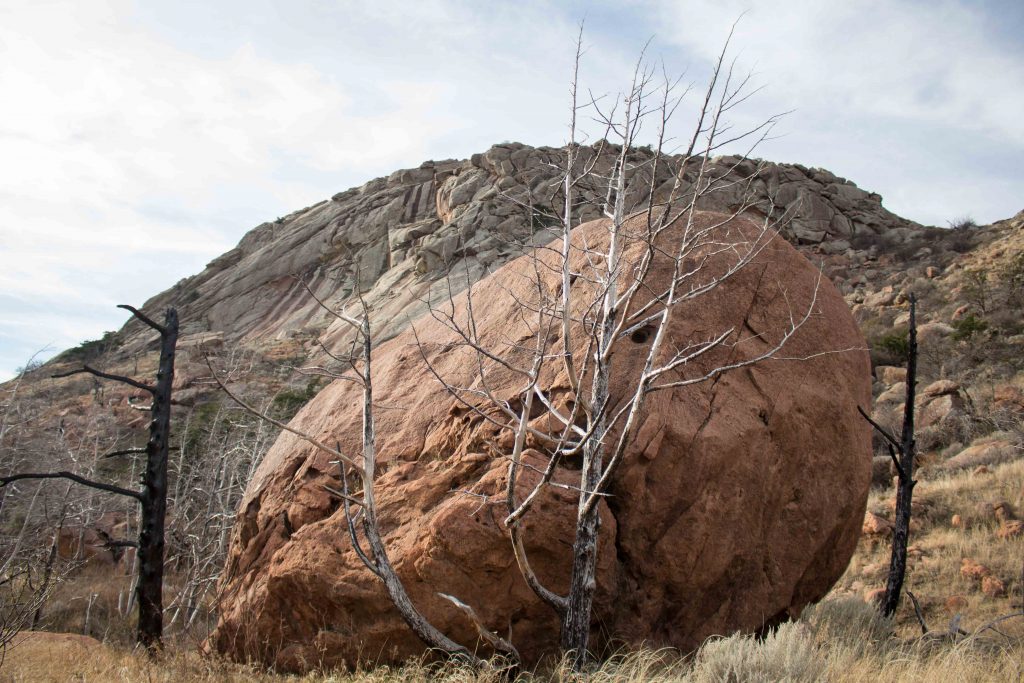 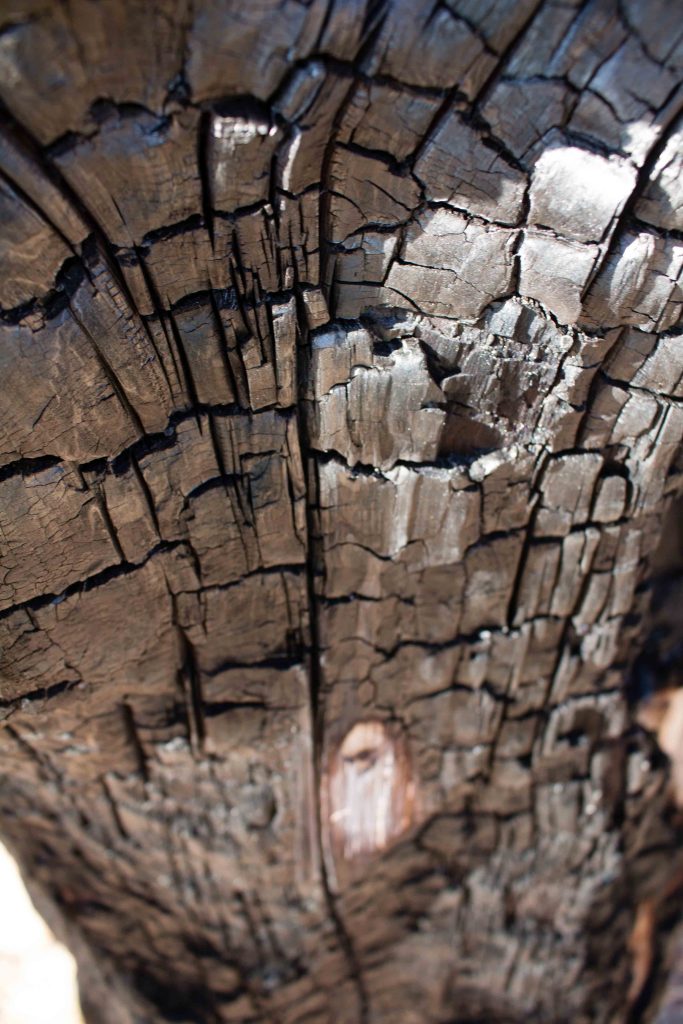 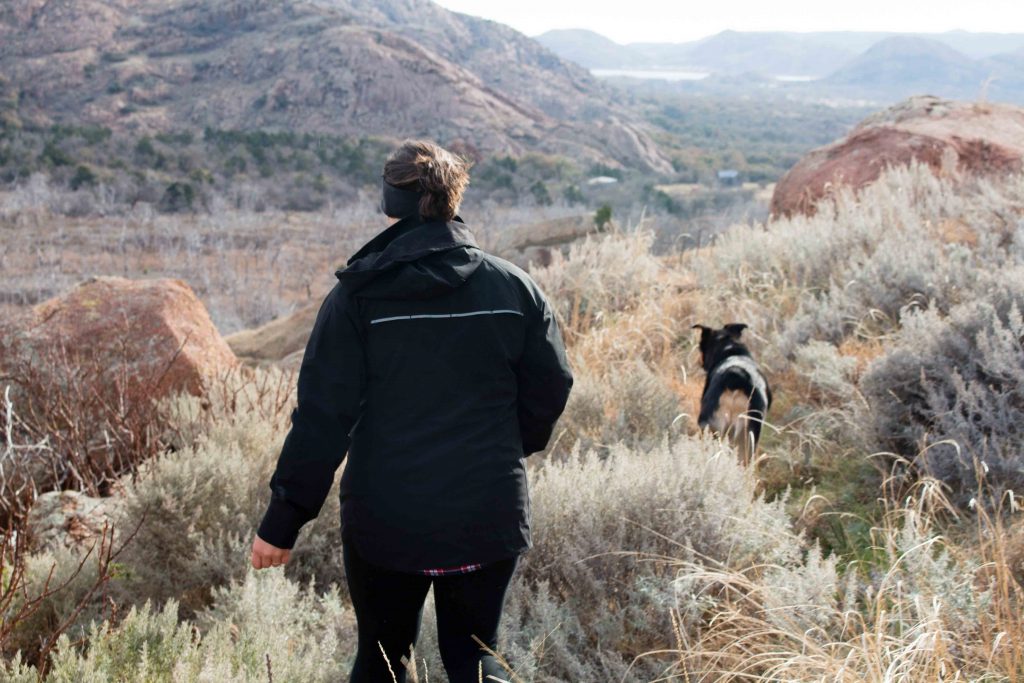 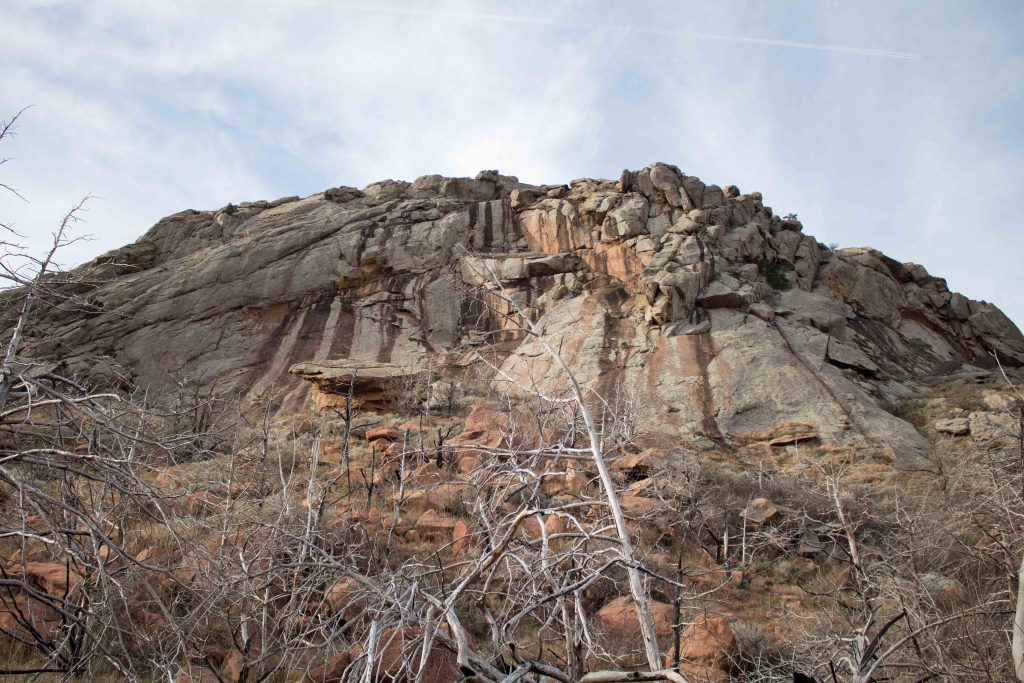 Friends have pointed out that hiking in winter is a big win because there’s no bugs. Year round, pants are needed (hello, ticks), so doing it without the heat made it really nice. Plus, we’ve had the trail to ourselves every single time we’ve gone.

We don’t usually see much in the way of wildlife, but once we saw porcupines! I’d never really thought about where porcupines lived, but apparently here. We were tromping through the woods, not trying to be quiet, when suddenly I looked over and there was one snuffling around eight feet away! We watched him for a bit, meandering away from us but not moving quickly  enough to seem that scared of us. 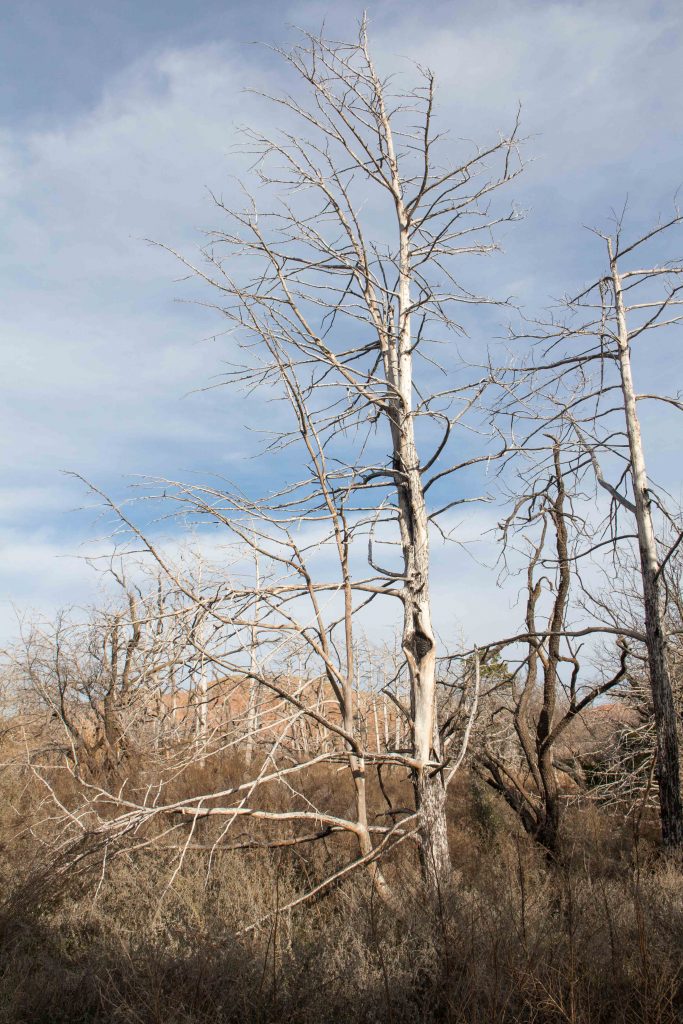 Even in the flatness of the plains, we found  a place my mountain-loving husband can hike some rocks and see some views. We love Quartz Mountain!

2 thoughts on “Quartz Mountain in Winter”