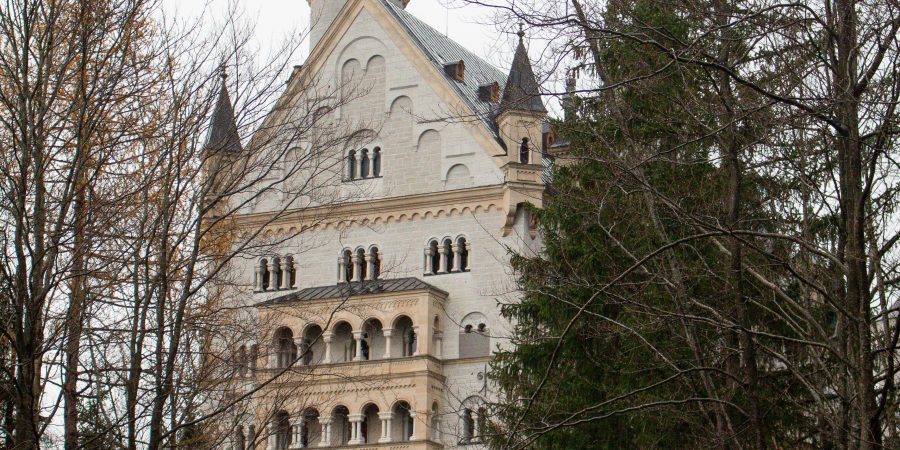 One of the best parts of Bavaria are the castles, like Neuschwanstein and Linderhof! Today I’m sharing the best way to see Bavarian castles.

Southern Germany has a few amazing castles that should make your bucket list. Bavarian castles are the stuff of fairy tales, and it shouldn’t surprise you that Walt Disney based his iconic castles on one of them.

How to Plan Your Visit

I recommend seeing Bavarian castles in one of two ways. The first is to rent a car for a day or two and see them for yourself at your own pace. the advantage here is not being whisked around on someone else’s timetable, and potentially combining other cool things to see with your road trip.

The other is to book a tour group’s day trip option. There are several available, and after a bunch of research, we went with Gray Line tours. The main reason is that this trip fits in touring two castles (Schloss Neuschwanstein and Schloss Linderhof) while most just hit one.

You also have to buy a timed entry for each castle tour, and in high seasons, that can mean risking buying them in advance and missing your entry (they’re very strict about this) or having to wait around forever to get in. Our tour group was able to call ahead on the drive so they set would aside tickets for the entire group.

After an early walk to the pickup point and armed with coffee and pastries, we set off through the Bavarian countryside! Our guide did a good job of offering a local perspective on life in the area and interesting tidbits but didn’t talk nonstop. Meaning most of us got a snooze in before arriving at the first castle!

Our first Bavarian castle was Scholls Linderhoff, and idyllic country home nestled into an unbelievably picturesque setting. It’s less well-known compared to our next stop, Neuschwanstein, but after touring them, by far my favorite interior. Mad King Ludwig built castles as a kind of hobby and spent as much time out of the city – and his responsibilities – as possible, much to his people’s confusion. There are plenty of rumors and theories as to why he was this way, but the result is some truly magnificent castles.

I’ll be honest: this is not your stereotypical castle. A fortress it is not. It’s a small, intricately decorated building set on beautiful grounds. I can see why he loved it, and after touring both Schloss Linderhof has my favorite interior by far.

The castle itself is actually quite small. There was something about it that reminded me of touring Monticello, home of Thomas Jefferson in Virginia. Both are small but elegant, with an eye to French style. Vastly different level of opulence – and, I suspect, budget – but the way the building was well appointed but small connected the two for me.

King Ludwig modeled Schloss Linderhof after the opulence of Versailles and was obsessed with the designs of Louis XIV, also known as the sun king. You can see the similarities in every room: intricate gold carvings practically drip from the ceiling. Every room has a color scheme but the lavish details create a continuity that makes the interior seem much grander than the size may initially convey.

The guided tour moves quite quickly through each space, so keep your eyes open to soak in every detail while you can! The guides tell great stories of the king and of construction en route, which always makes the slightly rushed experience better.

After the tour, be sure to explore the grounds! While they look significantly different in winter vs summer, they’re gorgeous year-round. It’s easy to see why King Ludwig kept trying to escape here during his reign.

One of the best parts of the grounds is the Venus grotto. It’s not open in winter so I didn’t get to see it! But if you’re able to, definitely head up there before leaving- it’s located behind one of the gardens and your tour guide may not tell you about it in hopes of keeping people from wandering too far. But you have time for a quick look if you’re willing to skip the gift shop!

After Schloss Linderhof, we headed for the main event: Schloss Neuschwanstein! This is the one that Disney’s now-iconic castle is designed after. It really does feel like a fantasy castle not of this world.

To see the castle, you need to make a steep trek up the mountain to arrive at its doors. You have the option of riding a horse-drawn carriage, which sounds romantic but is more like a slow-moving bus crammed in with strangers. We opted to walk because walking means more room for an excellent dinner later, right?

Give yourself plenty of time to walk, though – it’s pretty steep. There’s a reason I’m fairly red-faced in most of my photos up there!

This castle tour is also mandatory guided and includes an audioguide so the groups aren’t language-based. The audioguide is decent, but again, a bit faster through the building than I’d prefer.

The inside reminds me of the Beauty and the Beast castle somehow. Its decor is decidedly simpler than the Linderhof but that’s not saying much: it’s still covered in beautifully frescoed walls, unique chandeliers, and mythology built into the architecture. It also has a darkness to it that likely comes from it being uninhabited, but again, the contrast of beauty and darkness reminded me of the beast’s castle.

Don’t head back down the mountain again without attempting to see the epic views from the Queen Mary bridge (Marienbrucke)! The bridge will have a paved (but again, steep) path to it that’s well marked. It closes in inclement weather but is usually open, although it’s always choked with people. You can get great photos from here and leads to a bunch of hiking trails if you’re not with a tour group.

You know me well – no trip guide is complete without touching on the food options. Our tour guide recommended a restaurant on the main road, Hotel Muller Restaurant. While they were quick with service and good food, it was certainly overpriced. I think there was a counter-service place next door, so unless a nice meal is important to you, I’d do the place next door.

If you rent a car and are flexible, I’d also plan to tour the castle next door, Schloss Hohenschwangau. It was built by Ludwig’s father and looks beautiful from the outside. Our tour didn’t include the time to go inside, so you’ll have to let me know what you think!

Overall, I loved going on Gray Line’s day trip to explore Bavarian castles. It let us see the highlights without bothering with car rentals, maps, or even knowing how much time to allot to each place. If you want a no-stress way to see the original Disney castle, this is it!

I loved this trip option as a way to see the highlights of Bavarian castles in one day!

4 thoughts on “The Best Way to See Bavarian Castles”