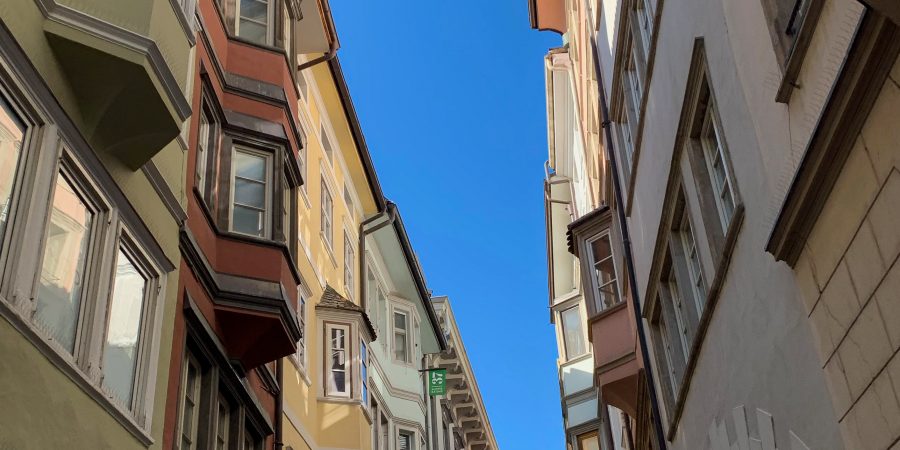 Bolzano is one of the classic jumping-off points for access to skiing and hiking in the Dolomites. Here are some of the best things to know before you go!

If you live in the US and are trying to see the Dolomites, Bolzano is likely one of the main spots you hear about. In winter months it’s a popular ski area, which often means that in the warmer months it has excellent hiking options! It’s also one of the easier access points to get to them, which draws a lot of the international crowds.

A quick note, as you research the area: this part of Italy is nationally Italian but culturally very Austrian. That means every city has two names. Bolzano is the Italian name and likely what the city is known as in most other countries, but it’s also called Bozen in German, and locals refer to it as Bozen most of the time.

Beyond skiing, Bolzano is known in academic circles for being home to Ötzi, or the Ice Man. Found in a glacier in 1991 and believed to be over 5,000 years old, he’s the best-preserved mummy science has to study how humans lived in that era.

You can see Ötzi for yourself in the South Tyrol Museum of Archaeology, right in the middle of the historic part of the city. The museum details what scientists have learned from his clothing, supplies, injuries, and more: any little detail can add to the picture. They also do a good job of pointing out the things they speculate but can’t confirm. I really appreciated the way the museum tries to detail their analysis in a way that allows a layperson to see the ways they drew their conclusions. Don’t miss the story of the complicated battle over what country – and what individuals, for that matter – could claim Ötzi as “theirs.”

The museum has all signs in Italian, German and English, and does a decent job of being kid-friendly and interactive. It’s also somewhat surreal to see this mummified body out on display – protected and preserved, obviously, but visible. Unlike most mummies I’ve seen, the skin looks remarkably preserved – leathered, yes, but something about the way he was preserved by the elements makes me understand why initially the climbers who found him thought he was simply a hiker who’d died of exposure.

Bolzano has several other small but cool-sounding museums. I haven’t yet been to the others, but the Civic Museum is housed in a palace in town and the Messner Mountain Museum is inside a castle on the edge of the city and celebrates everything mountaineering – both are on the top of my list for next visit!

If you want to stay in Bolzano itself, I recommend looking as close to the historic city center as possible. It gives you the most authentic “European town” feel that you’re probably looking for, as well as putting most things in walking distance. There are tons of shops, ranging from traditional Austrian pastry carts to United Colors of Benetton, so you can probably find whatever you’re looking for.

If you’re looking for good food in Bolzano, I recommend heading to Hopfen & Co. We stopped in at lunch and it was my favorite meal of the weekend! From schnitzel to risotto, they have a mostly Austrian menu with an Italian influence. And if you’re coming with a big group, call ahead and get the whole suckling pig!!! Goals, right??

Our waiter was great, and when I asked what his favorite beer on the menu was, he suggested getting half light and half dark. I know purists might put up their noses at mixing beers, but when the Austrian waiter who drinks this stuff every day suggests it, how can you not? It was good, and I liked it better mixed than just the dark by itself.

Should You Rent a Car?

This is a toss-up for this area. As in any mountain area, it’s really nice to have the flexibility of a car. We stayed in the tiny town of Vangen, a 20-minute drive up the mountain. From there, we could have walked to a bus station and taken public transport down to Bolzano. But the buses run infrequently, especially in the off-season (meaning, not ski season or August AKA European hiking season).

The flip side is that it was lovely to not have a car in the city of Bolzano. Parking there is tough in some areas, though in the tourist areas there are plenty of underground paid decks. Taking public transportation into Bolzano meant we didn’t have to fool around with any of that and I loved it. Plus, who doesn’t want to ride a cable car through the Dolomites???

So my advice would be to not rent a car if you’re staying in the city of Bolzano. If you stay outside the city, it might be a good call.

The RittenCard – Is It Worth It?

Essentially, the RittenCard one of those city cards you find in major metropolitan areas where you buy the card and get certain benefits in town. The RittenCard gets you onto all public transportation for free, including onto all the ski/hike cable cars up to other towns and areas where you can’t drive.

Additionally, the card gets you free entry into all the public museums. Meaning we paid nothing to see Ötzi, usually a €9 ticket per person. And that’s just one of the museums included.

The only “catch” to this card is you can’t actually buy it! It comes included with accommodation – hotels, B&Bs, and Airbnbs all offer it. So when you’re looking for where to stay, be sure to check if they include it – it’s worth it!

Our Airbnb host actually included these in the price of staying, and I 100% wouldn’t have thought to look for this until she showed us the best ways to get around using the RittenCard.

For perspective, we had a lovely weekend in the Dolomites, did everything we wanted to do, and only paid for our meals and our Airbnb. Everything else we wanted to do or see was covered by the RittenCard.

Bolzano also has one of the best Christmas markets in the Dolomites, if not in all of Italy, and I’m looking forward to getting out there soon to see it for myself!

If you’re looking for a weekend getaway that gives you a bit of both Italy and Austria, Bolzano is a great place to start!