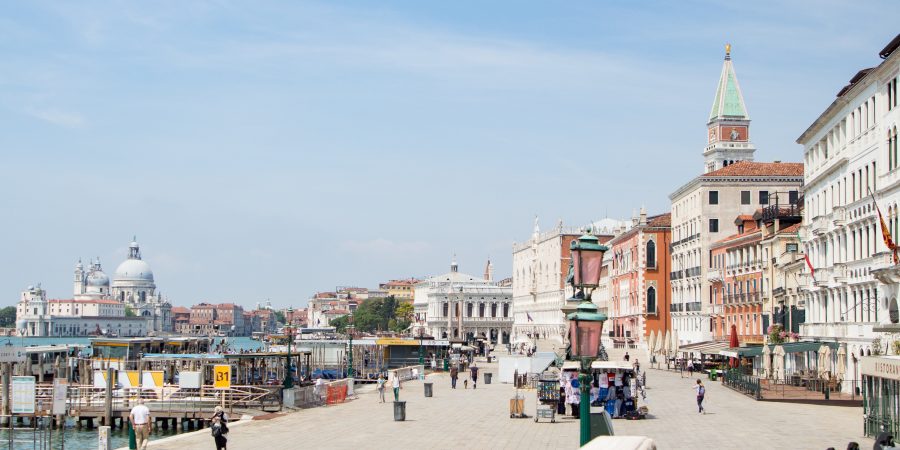 Venice without tourists has even more magic. Here’s an inside look at what the city felt like just after quarantine!

After 10 weeks of strict lockdown and a further three weeks of only traveling in our city or region (depending on regional requirements), we were permitted to travel anywhere in the country. During that first week, I actually went twice! Once Wednesday, June 3 (the first day possible), and again on the following Saturday.

One the first day possible, I headed to our local train station to go see Venice without tourists. Riding the train in a post-pandemic world is a whole other story, but very well organized and executed.

Stepping out of the train station in Venice is always a magical moment: that sudden stepping into the sunshine with the canal and gorgeous architecture right there grabs me every time. This time, though, it was empty. Almost no people milling in the open square. Ponte degli Scalzi, the nearby bridge, was practically empty instead of being crowded with tourists snapping photos and vendors selling selfie sticks.

The biggest difference was in the areas normally choked with tourists. I had the Rialto bridge nearly to myself, and the nearby shops were all boarded up. By Saturday, some shops had opened and more people were out exploring, but at a fraction of the usual bustle.

Walking into the Piazza San Marco was a massive difference too. The square had less than 50 people milling around, and several of them looked like photojournalists with massive cameras. The Basilica was closed for touring but open for services. Unfortunately, by the time I arrived mass had already begun so I didn’t get to go. The museums and campanile (bell tower) were also closed. By Saturday, the tourist entrance to the basilica and campanile had opened, but none of the adjacent museums had.

None of the shops or restaurants bordering the square were open yet. The famous spot to snap a photo of the Bridge of Sighs was empty, and walking along the canals felt far more peaceful with the lack of people.

The entire city felt quieter. I did see people dragging suitcases both days, but not in the numbers you typically do. I also only heard Italian all day long, which was such a difference from the typical day in Venice.

While the hotels and restaurants specifically aimed at tourists were largely closed, many of the restaurants and bars were open with a decent number of locals enjoying apertivo and cicchetti (Venetian bar snacks) on patios.

Wandering the streets is my favorite way to experience Venice at any time. It held an extra spark from the visible joy of friends and neighbors running into each other for the first time in months. While the quarantine within cities had been lifted for three weeks, gathering in groups is still not permitted. It’s meant that many friends had their first hello when they ran into each other at the butcher!

On Wednesday, a few gondoliers were out but none called out to potential passengers. I didn’t see any actually running. By Saturday, many more were out and actively trying to attract people. A few had riders, but not many.

While I didn’t get to see the canal water running clear, it was less murky than usual and I did see small fish! (By the way, the dolphin in the canal photo is fake. But the fish and clarity of water were real.)

A quick note about Venice in general: some people – a surprising amount, in my opinion – don’t love Venice because they think it’s too crowded. And if you come on a Saturday in July or August, it 100% is. But I’ve been visiting nearly monthly for a year now, and I’ve found that you can always get away from the crowds. If you stay near the Rialto and Piazza San Marco, yes, it’s going to be nuts. But Venice is so full of quiet nooks and empty streets and picturesque squares (called campo in Venice, only San Marco is a piazza) if you’re willing to get off the tourist track.

My point being: even if you don’t get to see Venice without tourists in this unique season, it’s 100% still worth a visit! The city has magic, I promise you. It’s closer to the surface right now, but it’s always there.

If you’re dreaming of Italy right now, follow me on Instagram as we get back into travel this summer!