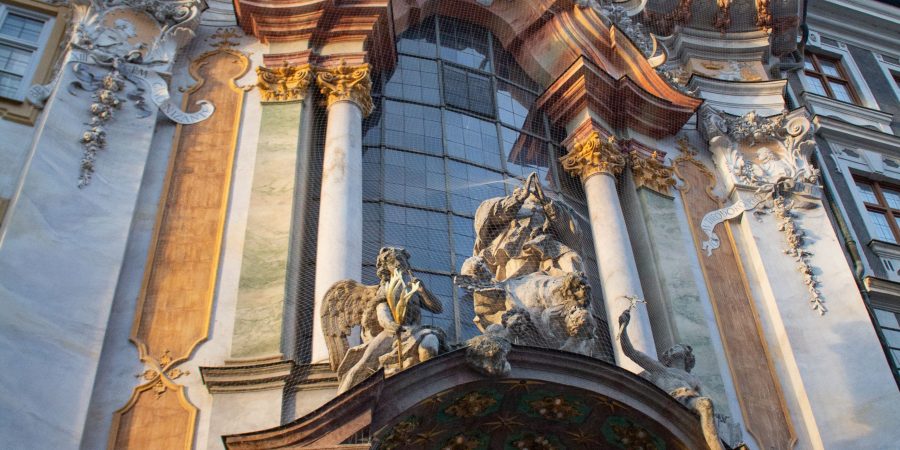 If you only have a quick visit, here’s what you need to see in Munich!

I confess Munich surprised me. It shouldn’t have, but it did. After visiting gorgeous European cities like Florence and Salzburg, I was excited for the German version of that gorgeous old cities.

As the cultural hub/birthplace of Nazism, Munich was bombed practically to smithereens during WWII. So nearly everything was built in the 1950s and as cheaply as possible. Buildings were painted to have some of the area’s previous character, but it rings a bit hollow.

I include all three of these together because it’s next to impossible to see one without walking by the other two. The most recognizable building is New Town Hall – clocking in at 150 years old, it’s young by European building standards. Its imposing Gothic style is the great exception to the previously mentioned bombing, arguably because Allied planes used the building as a map reference point.

In December, Marienplatz plays host to the biggest of the city’s Christmas markets, which will explain why all my photos include Christmas decor on the buildings.

Year-round, though, you can stand in Marienplatz facing New Town Hall to watch the world-famous Rathaus Glockenspiel, a historic clock telling two famous Bavarian stories every day at 11 am and 12 pm. One is a famous wedding festivities of the Bavarian Duke Wilhelm V (noted now because of founding Hofbrauhaus Brewery), celebrated with a jousting match. The second story followed the story of the celebrated dancing coopers, who defeated the 1517 plague in Munich by dancing and convincing people to come outside. (I didn’t say the stories were logical. That’s just what they tell.)

Old Town Hall was partially destroyed during WWII but restored to its former glory, and now houses the city council. The building itself is striking especially when compared to New Town Hall, if only to show what a difference in architecture 500 years can bring. Both Old and New Town Halls are open to the public, but there’s an entry fee.

One of the most well-known events predating WWII went down in Munich: the Beer Hall Putsch. While it’s famous for failing, the event catapulted a young Adolf Hitler onto a path that would eventually lead to his heading up the Nazi party.

What I often lose sight of when remembering 20th-century history is that the Beer Hall Putsch actually happened in 1923, 16 years before the U.S. began its involvement in WWII. The putsch failed and Hilter was arrested for treason, escaping the death penalty only by facing a judge sympathetic to his Nazi rhetoric.

I include this less to show a place to visit and more to point out the way that Munich lives within a history overshadowed by its most infamous citizen and party. We attended our now-usual Sandeman’s walking tour through the city, and our guide was quick to point out the settings for various key events leading up to and during WWII. The Nazi Party’s presence has left an indelible mark on the city.

Another beautiful building that survived the war is Frauenkirche. It’s an interesting cathedral in that it retains a bit of the classic European Christian feel with some distinctly German additions. The columns inside are wide and multi-faceted rather than circular. The stained glass – all blown out from bombings – was replaced not with replicas of the originals but with modern geometric designs.

Historically, this church’s claim to fame is the Devil’s footstep. The story goes that most of the way through the building of the cathedral, the city ran out of money. As the architect tried to figure out what to do, the devil appeared and offered to help. He ridiculed the building as it was currently, and said he would provide the money to complete the building as long as no windows were added to the construction. The architect agreed because there were, in fact, many windows already, but from the devil’s position in the back of the church, all were blocked from view by the columns lining the aisle.

When the devil returned to make sure the deal had been upheld, he realized his mistake and stamped a massive footprint inside the cathedral. You can still see a distinctly foot-shaped impression in the floor at the back, and people still tell the story!

The Munich Documentation Center has one of the most boring names of any museum anywhere. In typical German fashion, it’s a straightforward look at the rise and influence of the Nazi party. Housed in the former Nazi party headquarters, the museum’s permanent collection is in both German and English.

Similar to Berlin museums, the Documentation Center contains a lot of reading materials. It can be a bit dense if that’s not your primary mode of learning. But the information is excellent and most of it was a great reminder of the lead up to WWII that Americans rarely think through. Additionally, the museum is free, so even if you don’t spend much time there it’s worth a visit.

The Residenz is the former palace of the Bavarian kings of old. Conveniently, most of them are named Ludwig or some form of Maximilian, making my brain hurt both more and less somehow as I attempted to learn the history.

The Residenz is more of a complex than a single building. Unfortunately, much of it was bombed during the war and what we see now is largely recreations. However, the interiors are still gorgeous! We didn’t have time to take a tour inside, but photos have put touring Residenz at the top of my Munich travel list.

Like any great European city, there are several amazing museums in Munich. Here’s what I know or have been told by locals about each:

While we’re not able to travel right now, heading back to Munich is high on our list. Next year we’re trying to go for Oktoberfest!