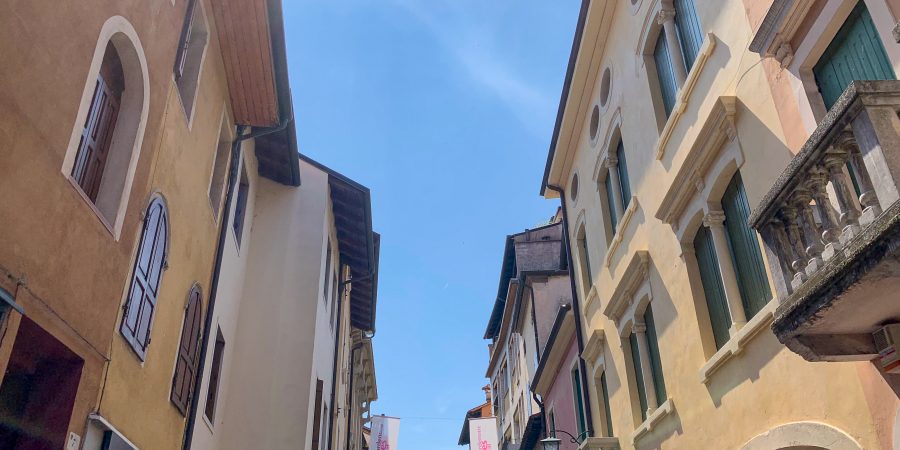 After five days in the car and nearly three days flying, we’ve arrived in Aviano! Y’all, we made it to Italy!

Our trip here was a bit bumpy. Our flights got delayed, which was tough on the pup but gave us in anovernight in Germany! We spent a night in the town of Idar-Oberstein, exploring the small town and being reminded of how German is completely unlike any Romance language. The town was darling and we ate delicious schnitzel, so the night was a win for sure.

Wedge was a champ. He had to essentially spend 2.5 days mostly in a crate and still was the best-behaved pet on the plane. It was fun to walk him around our tiny Germany town and see how many people wanted to talk to us in spite of the language barrier.

Because nothing is simple when moving overseas, we had some immigration issues with the dog. It was scary and frustrating, especially on almost no sleep, but it got worked out and we’re glad he’s here in Aviano!

Since arriving in Aviano, we’ve spent a few days in orientation programs and setting up the logistics of living here in Italy. It’s mostly been the paperwork and nitty gritty you need to stay in a foreign country – getting driver’s licenses, registered to travel out of the country, and processing car registrations.

That’s why you may have noticed I haven’t shown much on Instagram – there hasn’t been much to show! We’ve only left the base a few times (realities of being carless), and spend most of the day crossing from one office to the next. It feels like one long scavenger hunt for paperwork these days!

The weird part of an OCONUS move – a move out of the continental US in military-speak – is that the beginning is both fast and slow. I’m over the moon to be here, don’t get me wrong. But so far, we’re mostly stuck on base at the hotel or in offices. We see the same style buildings as on other bases; the cars are full of the same American cars; the on-base food options include a Burger King and Taco Bell. Which some people love, don’t get me wrong! But not quite what I had in mind for our great Italian adventure. Until our car is available (soon!) we’re stuck on base most of the time and not getting access to the cultural parts that make this move so dang exciting.

That being said, we have done some exploring! Yesterday, we spent the day on a Benvenuti (welcome) tour offered by the base for new arrivals. We saw a few local beautiful spots, explored one town’s weekly market, and got a few tips on traveling by train in Italy. We also ate a fabulous meal and went to our first winery!

We also went a bit further afield: a few days after arriving, a friend took us out to Barcis, a gorgeous lake town in the mountains. It’s the kind of place that looks like it’s straight out of a dream: the water has the unreal shade of blue that comes from snowmelt water. The trees range from almost-blue pines to the glorious yellow-green grass, broken up by vegetable and flower gardens owned by the local right along the walking trail. Towering over it all the Dolomites, standing stark and regal. It’s a dream of a town and I plan on going back many times. This beauty is only 30 minutes from where we’ll live??? What is my life?

We’re just beginning to hunt for a place to live. Apartments in Aviano and the surrounding area tend to get snapped up fast, but then proceed to the actual moving in process slowly, so we’re prepared to live in the hotel for a few weeks more.

That’s about the summary of it right now in Aviano. I’ll share more as there’s more to share!

If you want more stories about military life or expat life in Italy, join my email list! That’s where I share the good, the bad, the hilarious and the downright embarrassing. Join up right here for weekly-ish emails!