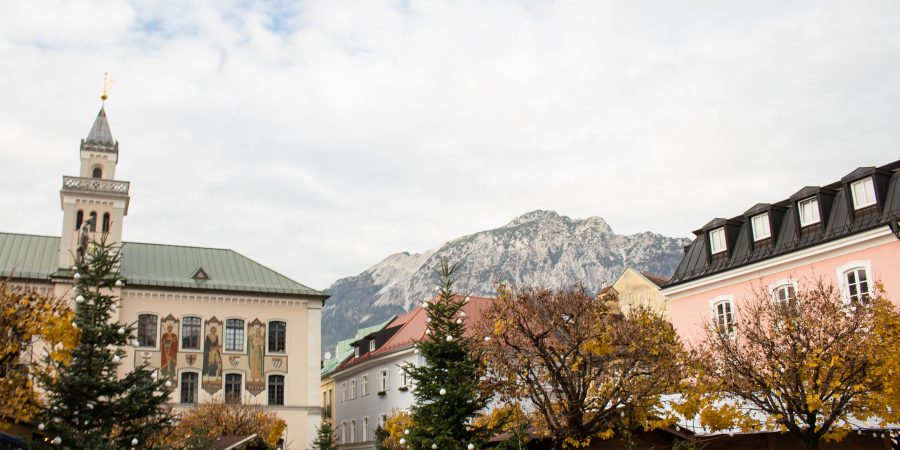 Bad Reichenhall, Germany is just a quick train ride outside Salzburg, Austria. Historically a spa town and salt producer, it has a few options for a day exploring small town Bavaria. But is it worth your time for a quick day trip?

After a few days exploring Salzburg, we decided to hop on a train for the day to get a feel for a tiny Bavarian town. We chose Bad Reichenhall, Germany, because it had a salt mine, a direct train, and our Salzburg Card listed it as a place to check it.

Was it worth the day trip? That depends. First, here’s what we did!

Salzburg gets its name from the region’s salt mine – historically, it served as a hub where barges transporting salt from the region on boats. Historically, this is how the city gained much of its wealth that led to much of Salzburg’s beautiful architecture and culture.

The entire area used to be known for its salt production, and multiple friends told us that salt mines were surprisingly fun. Plus, our Salzburg card got us a discount to the one in Bad Reichenhall. So without doing much research, we hopped on a train for the day!

We meandered through the town to get to the Old Salt Works and only after arriving realized that the tours were given only in German. It’s a smaller mine than some, but the oldest in both Germany and Bavaria and has the most storied existence.

The staff gave us a translation of the tour on paper to take with us, which was helpful beforehand, but as we walked not so much. Hard to look at a paper when you’re walking through tunnels!

It wasn’t a bad experience – I think it’s worth it for all English speakers to do things where they don’t speak the language every so often. A humbling and good reminder of how many others feel when they visit parts of the world more familiar to me.

Having read over the translation of the tour beforehand, I followed the basics of what we were looking at and how the saltwater moved through the tunnels and was pumped and processed. There are records dating back to Roman times of people harvesting salt from the briny water underground!

Like many natural resources, the town sprang up around the salt mine and later grew into a spa destination. You can find their brand of salt for sale in supermarkets all over Germany and Austria.

One of my favorite parts was seeing the various dates on tunnels and machinery. I think the most recent date I saw was 1823 – amazing how much of the older technology here still serves just fine.

I’d done enough research to know where I wanted to eat: Burgerbrau! It was the best version of a local bierhall: a series of cozy rooms full of locals getting their lunch. Since the holidays were just around the corner, we opted for the specials of duck and goose!

I can’t say for sure, but I think this was my first time tasting goose. I liked it a lot – it was similar to the duck, but a bit more robust and less delicate. Their local brew was delicious as always.

After lunch we had one more item on the explore list: a local Christmas market! While the big cities often have great Christmas markets, one of Europe’s hidden gems is their small-town markets. They tend to be cheaper and more traditional since they’re not working to attract tourists.

Bad Reichenhall’s Christmas market can be summed up in one word: darling. A small square had been filled with market stalls and fir trees, creating a festive corner near the center of the picturesque town. Even on a weekday afternoon, locals were standing at tables chatting with their gluhwein in hand. Some stands sold traditional Christmas cookies and others sold handcrafted gifts made locally. There was also a small kiddie ride, something I haven’t seen at the bigger markets anywhere.

Was a day trip to Bad Reichenhall worth the time?

The big question is, is it worth a day of your trip to Austria or Germany?

As always, that depends. It was lovely exploring a quaint German town. We were there in late November, so the trees and mountains had some truly glorious colors on display. The experience of wandering a town completely devoid of tourists felt like we were getting a peek into real life here.

That being said, Bad Reichenhaller salt mine specifically wasn’t what I expected. There are other salt mines in the region that offer English tours and more amusement park-style entertainment: massive slides built into the mines. As a still running salt mine, I get that Bad Reichenhaller can’t or won’t dip into this, but I’m always a fan of combining history and learning with silly fun. Plus, you know, English tour options to get more out of the tour itself. For more of that style of salt mine, try Hallstatt. It’s on my list for next time.

Experiencing a small-town Christmas market was also a big plus. Again, it felt like a hidden gem, seeing the holiday spirit without any crowds. I’d definitely recommend this, but it’s certainly not unique to Bad Reichenhall.

My take: I don’t regret spending a day this way! It’s so much fun to explore a small Bavarian town. On the other hand, I probably would steer others towards a different style of salt mine experience.

All things considered, don’t be afraid to take a risk and see a new place off the beaten path! They won’t all be picture perfect, but I never regret finding new experiences.

If you want more real talk travel experiences, follow me on Instagram for our local travels and bits of living life cross-culturally!