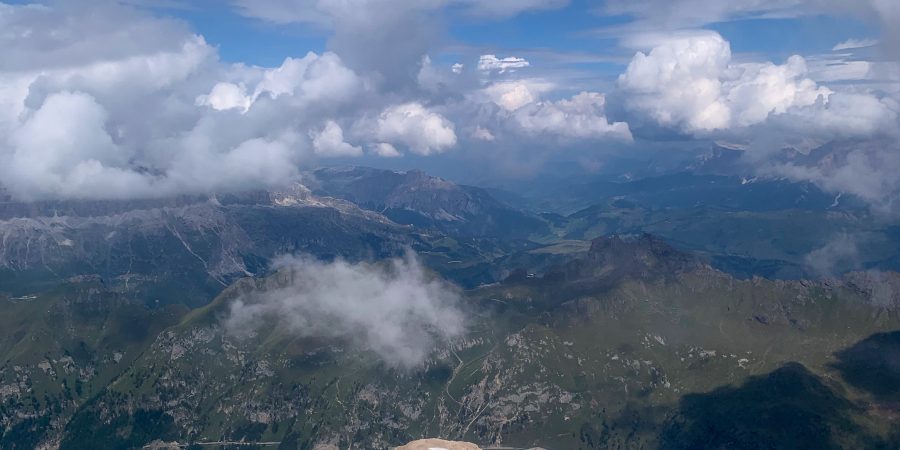 One of the best ways to experience the Dolomites year-round is taki the cable car up Marmolada!

No trip the Dolomites is complete without some hiking. But after that, the number one thing worth doing in the entire Dolomite mountain range is heading up Marmolada!

Marmolada lies just 30 minutes’ drive from Caviola. Known as the Queen of the Dolomites, she’s the highest mountain in the Dolomite Alps. She’s got beautiful views, epic ski trails, and a storied history. You ride a series of cable cars up the mountain for incredible views, skiing in winter, and a museum detailing the mountain’s history.

During World War I, the Austro-Hungarians fought Italians over the strategic point of Marmolada. Cutting tunnels through ice and rock, the two armies endured the realities of trench warfare while dying as much from exposure to the elements as from warfare. There are still relics of installments both sides added dug into the rock, and researchers still find small pieces of equipment or clothing along the mountainside.

There’s a small but museum in the main building telling the story of both sides of the war. The Dolomites had an unusual history within the war because while Italy remained neutral for a when they finally entered the war many locals ended up somewhat arbitrarily on one side or the other, conscripted to fight against their neighbors. The museum details conditions for fighting, living, relaxing and surviving within the ice and rock trenches. Everything is labeled in Italian, German, and English, making it easy to enjoy the museum without paying for a guide or . Entry is included in the price of the cable car.

Speaking of the price, getting to the top of Marmolada doesn’t come cheap. You can pay 24€ to get to the main level which contains the cafeteria, gift shop, museum and access to some WWI trenches. My advice is to spring for the 30€ ticket that takes you all the way to the top. At only 6€ more, you get a drastically different view and feel. At 10,800 feet (3309m), you’re within the clouds, so the view changes moment to moment but always feels a bit unearthly. There’s snow up here that never melts, which I always love seeing in the summertime. You can also enter a grotto shrine dating back to the WWI soldiers and most known as being visited and consecrated by Pope John Paul II in the seventies.

In winter, skiers can use the cable car to start what looks like an expert-level slope as well. Let’s just leave it at the fact that I will not be attempting that in the next few years. We did see a guy hiking/ice climbing down from the topmost level to the main (museum level). Technically it’s not prohibited, but the staff definitely kept a close eye on him for the two hours it took him. You’ve got to be an expert climber to venture down that steep ice sheet!

Make sure you dress warmly! We made the mistake of assuming that because it was 75° at the bottom, it would be similar up top. No dice – it was 50° and windy, and we definitely got some looks from the other visitors for our lack of preparedness. Wear shoes for hiking as well – much of the best sights require short but steep walks, and your cute shoes won’t cut it.

Spending a day exploring Marmolada doesn’t require much of you physically unless you want to clamber among the WWI caves. And it’s pretty cool to be able to say you’ve been to the top of the Dolomites!

For more help planning your trip to Marmolada, check out my suggestions for a weekend in the Dolomites and a fantastic hiking trail nearby!