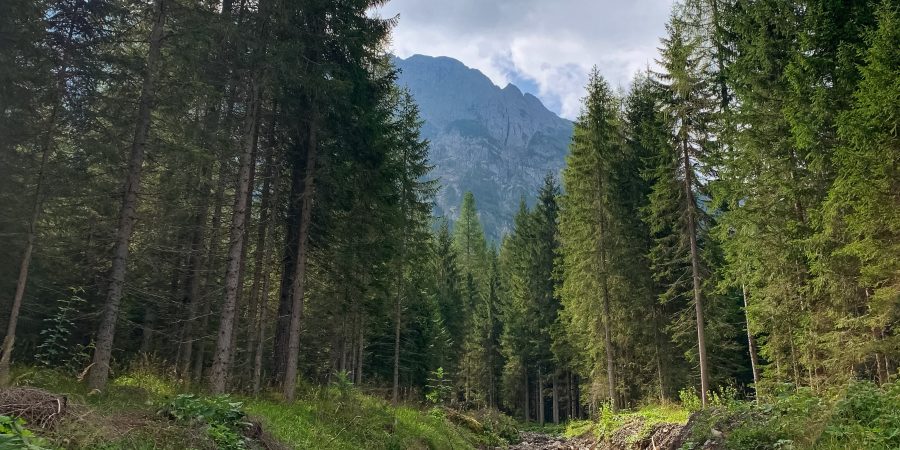 The Dolomites may be most known for skiing, but they’re excellent for hiking in the off-season! Today I’m sharing a favorite trail we tried recently.

Our main plan for visiting the Dolomites was to hike! There are tons of trails in the Falcade area, especially if you’re looking for all-day hikes.

We opted for a seven-mile loop we found on the Wikiloc app (not sponsored, just helpful to us!). The app called it moderately difficult, clocking in at 6 1/2 hours. It promised gorgeous mountain views and to get to a ridge, which is something Logan loves and practically requires in a hike.

The first third took us up the mountain through forests. It felt idyllic and isolated in the best possible way, as though we had the whole mountain to ourselves. We occasionally ran into others, both day hikers and backpackers, but I love the peace of having a trail mostly to ourselves.

We’d packed a simple lunch of bread, cheese, and salami (Italian staples, of course) and stopped at a lone picnic table for a quick break. As it happened, this turned out to be the best place to stop and eat, so I’m glad we took advantage.

Unlike most of our hikes in Oklahoma, the whole thing was well marked. Any time a deer trail showed up, there was always a blaze somewhere visible to make it clear. We also used Wikiloc to track our progress, which helped with peace of mind as we meandered through the mountains.

The trails are well marked but not maintained in the way they sometimes are in US national parks. Often these trails are barely more than deer trails- visible, but neither wide nor flat. No built-in stairs on these trails! Which is no big deal, but worth remembering as you choose the intensity of your trail.

The flip side is that there are more amenities set up for backpackers than I’m used to. From our lunchtime picnic table to rifugi, there are options to take breaks every few miles. A rifugio is essentially a shelter for backpackers. It can range from a bare-bones three-walled hut to (more commonly) a rustic hotel with a restaurant and bar! On our seven mile hike, we passed one of the latter and one simple cabin with an axe and fire pit.

Though the hiking is tough, the views are WORTH IT. The craggy peaks tower above you, reminding you that unless you brought climbing gear and some serious know-how, you’re still not going to get to the highest peaks in sight. It’s the type of rock (sorry, I don’t know my geology) with clearly-defined stratifications. It looks even cooler because those layers show up at such a steep angle that it looks like they were somehow knocked over and set at a 60° angle.

After about an hour of “just over this ridge and we’ll be at the top!” we made it. Breathless in more way than one (we were well above 8,000 feet in elevation), the views were stunning. I’ve heard the Dolomites described as fingers, and once we got to the top I finally saw what they meant. Stark, steep peaks reached up to the sky, clawing at the incoming clouds.

Unfortunately, just as we got to the top it started to rain in earnest so we didn’t hang out too long up there. I’ll be honest, the trek down wasn’t the best. The steady rain made an already steep trail slippery. We both took a few tumbles, and the poor dog was a good sport but didn’t love the short leash for such a steep descent. I knew we’d be racing the rain, but it came a few hours earlier than expected, so the entire second half was a wet hike. We made it and still had fun, but let’s just say that we’ll do it a little differently next time!

When planning your trip, here are a few things to remember:

Initially, we scoffed at that time-to-distance ratio, only to find it not as far off as we expected! It took us about five hours to cover the eight-plus miles my watch says we walked on this trail.

If you’re looking to hike the Dolomites and get a little off the beaten path, try the Falcade area. I’ll share some tips on where to stay and eat this weekend!