Thursday was a big day for me.

Thursday I took Logan to the airport. He headed to Field Training for Air Force ROTC members, where he’ll spend a month getting physically and mentally prepared for his future career as a JAG officer.

Interestingly, because he’s doing this with the ROTC units he’ll be with almost all undergraduates. While they have the advantages of faster metabolisms and 2 years of preparation for this time, he has the advantage of having a fully-formed frontal lobe to deal with the stress and general insanity that may be thrown at him.

A few of the things that aren’t allowed at field training are caffeine, technology, candy, and essentially autonomy. There’s a lot he didn’t know going in, so there’s a lot I don’t know. I’m looking forward to some letters from him, but I also know that he’s going to be worked so hard that I’ll be the main communicator while we’re apart.

This is the longest he and I have ever 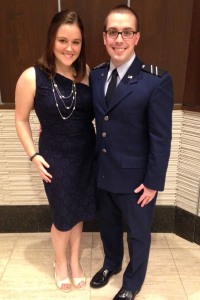 been apart. Now, it’s not nearly so bad – I’ve got a great community locally, so I’ve definitely still got people who love me and who I love. Conveniently I’ve also got a ton of travel in the next several weeks, both for work and fun. So that helps.

But this is my first taste of what military spouses deal with regularly, and I confess that I’ve got a bitter taste in my mouth about this whole being apart business. I can’t imagine how spouses (both the ones being deployed/trained and those still at home) deal with this long term, and I have a ton of respect for those who signed up for this job knowing the costs to yourself and your spouse.

Air Force, you get his undivided attention this summer, but come mid-July, I’m taking him back. You’ve been warned.