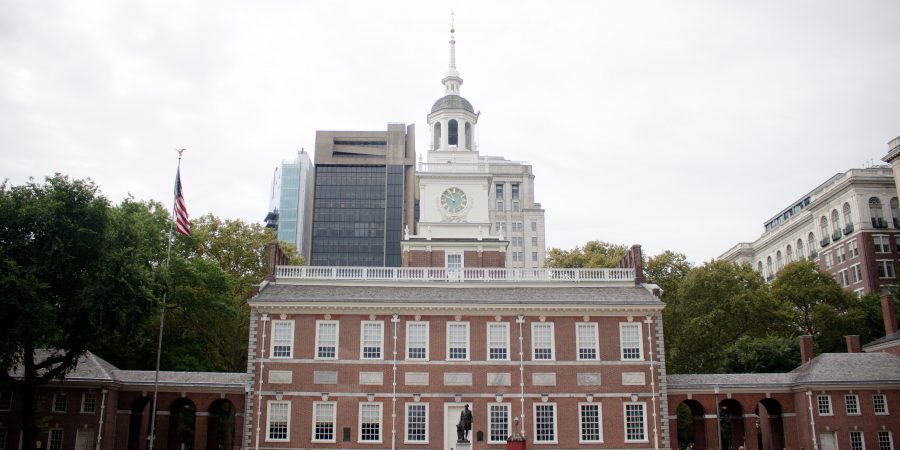 Philadelphia may have the most patriotic history of any American city – not only did it serve as host for the Liberty Bell and the original U.S. capital it also can claim many of the most well-known documents and characters of the Revolution and its aftermath. So if you’re planning a visit, give a day to explore the historic things to do in Philadelphia!

If you go to Philadelphia, you absolutely have to see the historical parts of the city. Did you know that within 100 years of colonizing America, Philadelphia was the second largest English-speaking city after London?

Today I’m sharing how to spend one day seeing everything you need to see all the historic things to do in Philadelphia!

Historic Things to do in Philadelphia

First, walk a few blocks up to the Independence Visitor Center. There’s not a ton to do here, but it’s where you get tickets to go inside Independence Hall. The tickets are free but are timed entry, so best to do this as early as you dare (opens at 8:30). I was solo traveling it so I snuck into an entry time within 30 minutes of picking up my ticket, but bigger groups will have to get later times. You can also pay a small fee ($1 per ticket last I checked) and get your ticket online in advance, which is probably worth it to save you this step.

Assuming you’ve got time to kill before your tickets are good, head across the street to the Liberty Bell Center. It’s free, but you’ve got to line up and go through a metal detector before getting in. There you’ll see the history of the Liberty Bell, including the fact that it wasn’t named that until long after the American Revolution. At the end of an exhibit hall is the real deal, and when I visited the audience was surprisingly reverent. It’s a cool piece of history for its symbolism, and 100% worth waiting in a bit of a line for. Although I went through around 10am and had only had to wait 5 minutes before getting in, so you may luck out.

Next up: head over to Independence Hall! If your tickets are good for the next hour, head through the security line. There are a few tours you can do in this group of buildings, so head to the line for Congress Hall (the westernmost building) for a free tour. You get to see the original House of Representative and Senate meeting space, as well as a few offices and meeting rooms. This is where Congress met for the first decade of its existence, before moving to Washington D.C..  Like the Liberty Bell Center, they’re run by the National Parks Service and do a great job setting the scene for what you’re seeing, including identifying what’s original and what’s re-created for effect.

If you still have time, do the “Great Essentials Exhibit” between Congress Hall and Independence Hall. It’s one but has on display original documents crucial to America’s budding existence: a copy of the Declaration of , the Articles of Confederation, and the Constitution. These are all originals, meaning dating back from the first formal printing of each document. It gets confusing because there were multiple copies of the original formal documents made – so the signed original Declaration is in Washington D.C., but this is also an original copy on display here.

Also in this courtyard is the Philosophical Hall. It holds an exhibit of the American Philosophical Society, which back in the day meant a scientific society. It’s a quick exhibit of the history of the group, including some notable members (founded by Benjamin Franklin, for one) and major scientific breakthroughs its members have been part of.

your timed entry has come up by now! Head to the middle to get rounded up into Independence Hall. It’s a relatively quick two-room tour, with knowledgeable park rangers giving the background for the setting and what happened in each room. Spoiler alert: this is where they agreed on the Declaration of Independence. So definitely go have a look.

Full and ready for more, head east. First see Library Hall, original home to the Library of Congress, and the Second Bank of the United States. You can go in these, but I opted to keep moving to see more. Next see Franklin Court, another collection of Benjamin Franklin-related buildings. You can see the ruins of his old home, a colonial-set post office, and an old-school printing press in here for free. There’s also a  Benjamin Franklin Museum with a $5 entrance fee. I didn’t check that out this time, but it covers Franklin’s life, inventions, and influence.

On the way swing by Penn’s Landing for a view of the Delaware River or Christ Church, where several founding fathers are buried, including John Penn,  Benjamin Franklin, and several other signers of the Declaration of Independence and Constitution. Hamilton the Musical fans (or deep history nerds) can also find General Charles Lee buried here.

Whatever you see or skip on that stretch, you should definitely head north to hit Elfreth’s Alley, the oldest continuously occupied residential street in the US. It’s one of the most picturesque streets you can imagine, full of beautiful colonial homes with brightly patriotic shutters. There’s a small museum, but even if that doesn’t grab, you, it’s worth the stroll down and back.

Before you head south, walk a few blocks west to the Betsy Ross House. This one I actually sprung for the entry fee: it’s very well done, with three floors of historically accurate rooms set up to give you a feel for her actual life beyond sewing the original American flag. The exhibits are kid-friendly but interesting to adults and give viewers a feel for both her “normal” life and the risks involved in agreeing to create the flag (something I’d never thought about!). This costs $ but was my favorite small museum of the day and I’d definitely pick this one if you only pay for one entry.

There’s several more historic building to see, including the First Bank of the United States, the Merchant’s Exchange, the City Tavern, and Todd House. Walk and see as many of those as you like! (See, I wasn’t kidding about how many options there are for historic things to do in Philadelphia.)

Still craving more? Spend a few hours at the Museum of the American Revolution, which ties everything you’ve seen together. It’s a chronological retelling of the war and helps get all the things we learned in U.S. history that we forgot to line up mentally.

That’s a full day soaking in the historic things to do in Philadelphia!

What’s your favorite thing to do in Philly?? I’ll be sharing more city fun soon, so stay tuned!