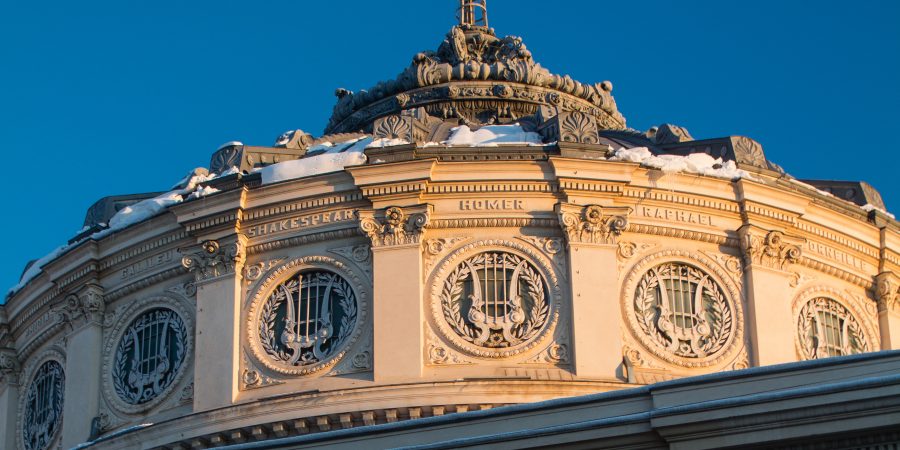 If you’re looking for an inexpensive yet beautiful city to explore for a weekend, head to Bucharest, Romania!

One of the best parts about being based in Europe is that I can now hop on cheap flights to explore wherever happens to be having a deal! So when the opportunity to visit Bucharest came up, I jumped at the chance.

Growing up, I confess I knew almost nothing about Romania and its history. Even as an adult, my Cold War knowledge is pretty lacking. Our trip to Berlin last year opened my eyes to much of life behind the Iron Curtain and I was excited to see more!

Not into history? No problem. Bucharest has gorgeous city architecture, great local food, and a great coffee scene. Basically, this place has everything I want in a city.

I haven’t created an itinerary here, only because I think it matters if you’re the type to spend 45 minutes or 4 hours at a museum. But you can easily see all this in two days, and everything except the Village Museum is walkable in relation to each other.

What to do in Bucharest

The National Museum of Romanian History is a good starting point for a visit to Bucharest, especially if you’re like me and know very little about Romanian history. Their main exhibit takes you through the rise and fall of Romania’s experience under the communist dictator Nicolae Ceaușescu during the Cold War.

The exhibit goes through experiences under Ceaușescu and his cult of personality before zooming in on the Romanian Revolution where he was overthrown in December 1989. They also catalog changes after the fall, including random fun details like the fact that Michael Jackson was the first major Western musician to tour here in 1992. One of the most stirring parts for me were the quotes painted on the walls throughout. It’s a stirring reminder for someone like me who grew up under democracy.

They also have a number of other exhibits, some Romanian-specific and others not so much. One cool thing is a life-size replica of the base of the Trajan column! It’s massive and a bit confusing at first. It’s here because the battles depicted on the column itself are of the conquering of Dacians, now present-day Romania. You’ll see evidence of the Roman empire dotted thoughout the country, but this is the biggest one (literally).

Like many attractions, the museum is cash-only, but there’s an ATM across the street from the main entrance if you forget. Additionally, nearly all of the museum exhibits have bilingual signs.

Since you’re practically already here, go wander around Bucharest’s old town for a bit! It’s a fun, mostly-pedestrian part of town. A bit touristy but not enough so to feel fake.

There are several gorgeous spots worth checking out, including the bookstore and the often-Instagrammed umbrella street. The latter was kind of hard to find an address for, but I managed to find it here.

There’s a ton of beautiful architecture here. Two churches worth stepping into are the Stavropoleos Monastery (near the museum) and the ruins of the Old Court Church “Curtea Veche“.

Palace of the Parliament

The Palace of the Parliament is home of Parliament and an example of updating communist era. This building is such a fascinating representation of how communism went wrong. This massive stone building, which is the heaviest in the world, was under construction while much of the Romanian population was starving.

The undertaking was so massive that it was only about 70% finished at the fall of communism. It sat abandoned for a while, but cost estimates indicated it would be cheaper to finish it than to tear it down, since all the supplies had already been gathered. The result is one of the most opulent buildings I’ve ever seen.

A Romanian friend told me one of the bathrooms has a golden toilet, but sadly the tour doesn’t include this anymore.

If you pre-schedule anything, it needs to be this. Tours are guided – after all, this building is still used as an active seat of government – and there are specific times for each language. There was an English tour maybe four times daily, and the building isn’t open to the public everyday. The tourist entrance isn’t immediately obvious if you walk there, but it’s on the north side of the building, along the Bulevardul Națiunile Unite.

The Patriarchal Cathedral is a gorgeous church worth seeing. The decor inside is ornate but unique from some of the Western cathedrals I’m more familiar with. Unlike bigger cathedrals, there’s no entry fee. But remember to be respectful of the worshippers in the space.

While there’s not much to “see” here, it’s worth swinging through Revolution Square if only because of the historicity of the spot. Here’s where protests turned into a revolution in the course of a 90-minute speech.

While you’re here, you should see the Athenaeum for the architecture and if you want another museum, head into the National Museum of Art, which is housed in the former Royal Palace.

This is the one thing I didn’t get to in my time in Bucharest. The Village and Rural Life Museum of Romania looks at Romanian life used to be like outside the city. But everyone I’ve asked – both visitors and locals – says it’s worth checking out.

Tips for Getting To and Around Bucharest

Romanians speak Romanian, which is just similar enough to Italian that I could sometimes read it. In the city itself, many people speak English, which is a huge help. But don’t forget to say mulțumesc (pronounced multso-mesk): thank you!

One great thing about visiting Bucharest is that it’s a very affordable city. Romanian money is Lei. Last I checked, it worked out to about 4 lei per US dollar. If you’re already in Europe, you can almost always find a cheap flight on one of the budget airlines – just check Skyscanner.

We also stayed in the heart of downtown at the Athenee Palace Hilton. It’s a gorgeous historic building within walking distance of several museums and the Old Town. While generally I look for Airbnb’s first, going to this Hilton reminded me why it’s always good to check for both: we had a suite with breakfast included for about $100/night!

Taxis are pretty helpful to get around and pretty affordable, but you have to have cash and negotiate a fare in advance. To get from the airport to the city center, however, there’s a bus that’s a straight shot and clearly labeled. Oh yeah, and it’s about $1 each way. Pretty good deal.

If you’re only in Bucharest for a few days, try to get a few great Romanian meals!

La Mama is essentially fast-casual Romanian food, making it the perfect lunch option when you’re on the go. There are several locations and the menu is full of classic Romanian dishes. I really liked the ciorbă de burtă (tripe soup). I know tripe soup may not sound the most appetizing, but it was delicious!! It’s perfect on a snowy day of exploring the city on foot!

A friend of ours lived in Romania for three years and recommended this place. Hanu’ Berarilor has a great festive feel – eat on the patio, even in winter! Don’t worry, it’s heated. Another classic Romanian dish to try is sarmale (cabbage rolls stuffed with pork, rice and spices), and get papanasi (a take on a fried donut topped with creamy sauce and jam or fruit) for dessert!

Caru’ cu Bere should make your list, and located right in the heart of the historic district. Unfortunately we didn’t get in because for dinner you need to make reservations. So plan ahead on this one!

Bucharest is an incredible city and I’m already scheming when to go back! I hope this helps get you started planning your time there!

Want more European travel ideas? Follow me on Instagram for destination inspiration as well as expat life in Europe!