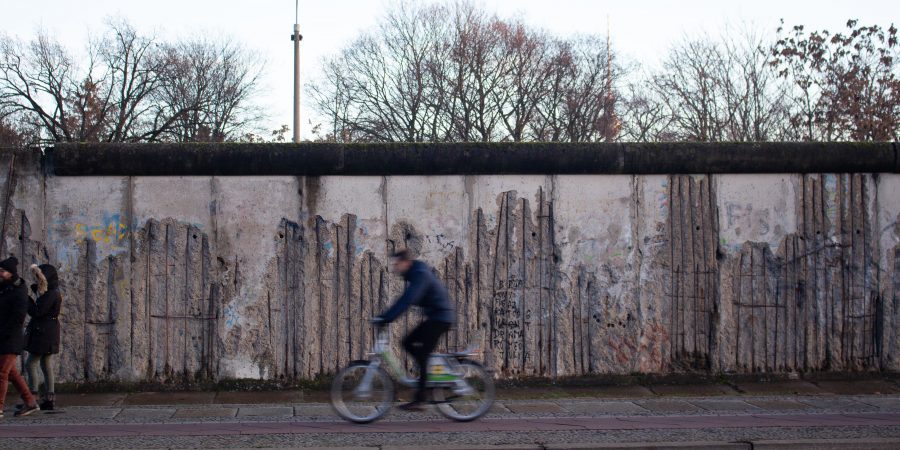 Berlin has a ton to see, but if you’re interested in history in Berlin, I’ve got you covered!

Berlin is one of those cities that is just cool. The city just begs for you to move there: it has great public transport, plenty of jobs, and a fantastic international food scene. I can see why people love it.

If you’re like me and just headed to Berlin for a weekend, you’ve got several decisions to make. What kind of trip are you trying to have? You could do a food weekend and eat your way through one neighborhood. You could do all their classical history and art museums – I read somewhere that the museums on Museum Island contain the biggest collection of Turkish artifacts outside of Turkey. Or you could focus your time on Berlin’s intense history of the past century.

We did the latter, choosing to focus mostly on the Cold War but with plenty of WWII thrown in. I confess that as an American born in the 80’s, what I know about the Cold War is vague and mostly based in Hollywood and Bond films. So we were excited to learn more while being in the room where it happened, so to speak.

I won’t spend much time on this here, because it’s not directly related to the WWII & Cold War aspects of the city. But as you plan your trip, please save yourself a few dollars and skip the Berlin Card. Some cities offer excellent deals with their city card (Salzburg and Bolzano may be my favorites so far), but Berlin’s is simply not worth the price. It’s not cheap to purchase, and then only gets you discounts on public transport and a few museum entries. I’m honestly not sure how you could use it enough to make it worth the cost of purchasing. Save your pennies for something else, like museum entries or a great meal.

Do A Walking Tour

I’ve probably beat these into the ground at this point, but Sandeman’s walking tours are amazing. Because the guides work for tips, they’re usually people doing this job because they genuinely want to talk about – and get you both excited and informed about – their city. The guides can offer history in Berlin from the perspective of a local or of an international resident who truly loves the city.

The tour was especially great because we were given details that no amount of reading or studying could’ve provided. Every tour does this, but I particularly noticed it in Berlin because the city has such a complicated past with its history. For example, our guide took us to the spot where Hitler’s underground bunker used to be. Now, it’s a parking lot for an apartment building: the German government decided to not allow that spot to become some kind of shrine to him, so treated it as any other plot of land. I kind of love that they did that, but I also love that our guide knew the spot and took us there.

She also touched on the complexity culturally for citizens of East Berlin, both during and after the Cold War. I can’t recount all of it here, but she did an excellent job painting a picture. She even pointed out some of the small cultural things that outlasted the Berlin Wall like Ampelmann, the unusual-looking man on the Walk/Don’t Walk traffic signals.

The company also does several topic-specific tours that are paid – the free tour acts as an overview. When we go back, I want to try their Cold War tour.

Memorial to the Murdered Jews in Europe

We spent a few minutes walking through the Memorial to the Murdered Jews in Europe (also referred to as the holocaust memorial), and I highly recommend it. Walking up to it, it doesn’t look like much. But the ground dips down as you enter, suddenly placing you amongst regimented columns of stone. The effect is starkly bleak and surprisingly overwhelming.

Creator Peter Eisenman said that he wanted viewers to interpret their experiences themselves rather than tell them his interpretation. He did base it a bit on his experience viewing the Old Jewish Cemetery in Prague. Definitely worth taking ten minutes to walk through.

The Topography of Terror Museum is just a few blocks away from the holocaust memorial, so it’s an easy spot to see next. The building is ultra-modern, along the Berlin Wall, and free to enter, so you should check it out.

The museum focuses on the three groups that perpetrated much of the horrific treatment of minority groups during WWII: Gestapo, SS and those who ran concentration camps. It sits on the sit of former SS headquarters and you can still see the remains of prison cells in the runs of the foundation.

I felt that the presentation of information in this museum seemed very German. The museum lays out the facts for its guests but doesn’t focus on weaving a narrative. A few boards tell about mid-level and upper-level Nazis after the war. Many were not convicted and others were convicted but not punished. The facts are there, yes, for sure. But I could definitely see a distinction in the style of giving information. There was no commentary or speculation on why these people weren’t charged – did they claim they were simply following orders, in fear of their lives? Were they too small potatoes to prosecute in the end?

Don’t misunderstand – I still would recommend this museum. Just know that it’s a slightly different treatment of the content than some of the other WWII and Holocaust museums in other countries.

Situated a little further out of the city center is the Stasi Museum. It’s out here for a reason – this is the former headquarters of the Stasi in East Berlin. If you want history in Berlin during the Cold War, this is one of the best places to see. In former offices, they detail the history of communism in the city and detail the Cold War from a Communist perspective.

It was very interesting. The drab and boring interior – purposefully so, this is largely how the building looked fifty years ago – puts you in the headspace of communist Berlin. My favorite parts of the museum detail the intricate systems of monitoring residents. Did you know it’s estimated that at least a third of the people living in East Germany were informing on their families and neighbors? Some rooms showed how they planted listening devices in suspected traitors’ homes or engaged in psychological warfare on them. I thought it was well done and was probably my favorite museum we did that weekend.

Memorial of the Berlin Wall

There are remains of the wall scattered throughout the city – you can find bits near the Topography of Terror, near Checkpoint Charlie, and of course, the most famous section is the East Side Gallery.

One section has been recreated to show exactly how it looked during the Cold War. There’s barbed wire, no man’s land, and gun/guard towers. It was surprisingly moving to see it set up: that so many people in the latter half of the Cold War genuinely tried to get over/through/around that. It looked a bit like escaping prison in the movies.

The Memorial of the Berlin Wall includes the recreation and an exhibit across the street. It offers a viewing platform to get a real view of how impossible a straightforward crossing would be. The bottom floor does a good overview of the setting up of east and west Germany and Berlin and how the wall – and the cultural expectations around it – changed over the decades.

We didn’t get to do the Allied Museum – it’s situated quite a bit out of the city center and takes nearly an hour to get there by bus. I heard it’s one of the best in the city for WWII museums, so make sure to allow enough time to get out there!

You could spend a month exploring history in Berlin, even if you only focused on WWII and the Cold War. However, based on my research and asking locals, these are the ones most worth visiting!

Next week I’ll be sharing some great places to eat in Berlin, but until then, check out more travel tips on Pinterest!

2 thoughts on “A Weekend of History in Berlin”