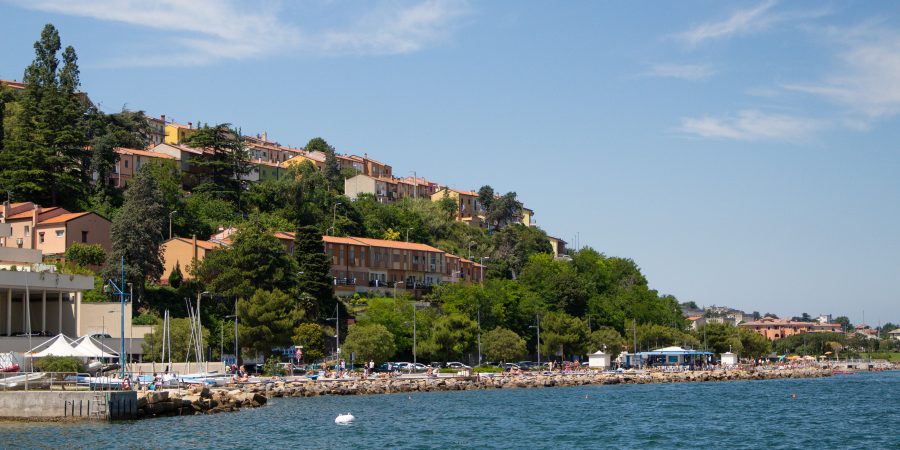 Muggia is the perfect tourist-free seaside town in northern Italy!

Formerly a Venetian town, Muggia was a weekend getaway spot. It’s slightly cooler temperatures and fewer people made it ideal for wealthy Venetians. While the area has changed nationalities and cultural influences several times in the past thousand years, there’s a distinctly Venetian presence in everything from the architecture to the accent.

We decided to spend a day in Muggia because we wanted two things: time by the ocean and time on a boat. Ocean time can be found in Trieste, but the Muggia came highly recommended from some locals so we decided to jump on a boat!

You can catch the local ferry between Muggia and Trieste hourly. Head for the Trieste passenger terminal pier and look for the boats called Delfino Verde (“green dolphin”). The boat will say “Muggia – Trieste” on the side to make sure it’s the right one, but you can find the full timetable here. Make sure you’re there a bit early, they don’t wait!

Once on the boat, you pay for tickets – round trip is 8.90€ per person (cash only). The ride is about 30 minutes long, offering great views of the shoreline. If you can, sit either in the few seats in the very front of the boat or on the top level. You’ll get beautiful views and the wind in your hair!

Even if I hadn’t told you it was Venetian, you could probably tell as soon as you walked into the historic part of town. The classic Venetian windows peek down from second stories, and the piazza still proudly flies the lion of San Marco.

Muggia used to be a walled city, and like many classic European towns, the wall marks a style difference. Inside the historic center – the walled part – this look classically Venetian. Step outside, or even look what’s attached to the other side of the wall, and it’s a modern small town.

No walled city is complete without a castle, and Muggia is no exception. You can see it from the harbor, but visiting hours are sporadic. If you’re in the mood for a walk, maybe go check it out, but if you’re here for the seaside, it’s not worth it.

Like Trieste, this area has a bit more beer options than you’ll find in most parts of Italy. We have the Austro-Hungarian empire to thank for that, and the piazza is dotted with restaurant tables sporting more steins than wine glasses.

After getting the lay of the land, we ate at Marconi. They have plenty of pasta and seafood dishes, but on a hot day we wanted pizza and a refreshing drink! Plus a meal in the piazza is one of the best ways to get the feel of a town.

But mostly because we wanted a sit-down place in the piazza. If you want a quick and easy lunch, do Pane e Pizza – it’s owned by the same people. It’s the perfect option to take with you to the beach!

The “beaches” in both Muggia and Trieste were a bit different than I expected. Rather than a beach of sand or pebbles (equally common in on the coast of northeast Italy), a concrete sea wall sits about 6 feet above the water level, with large rocks running alongside. To get in the water, you either climb the rocks or look for the occasional stairs into the water that pop up occasionally.

This is the Adriatic, remember, so there aren’t any waves and getting in this way is pretty simple. You do have to know how to swim, though – the water gets deep fast – but it’s quite nice.

Rather sunbathe? Locals lie right on the concrete seawall! It sounds a little strange, I agree. But we saw locals stretched out throughout the area soaking up sun. There were even snack bars, bathrooms, and lifeguards for spending all day by the water!

Muggia has a more traditional beach, Bagno in Rocco, but it’s paid entry. We opted to do as the locals do and stretch out on the sea wall. Perfect if you only have a few hours and don’t want to pay for space.

Muggia was a great little day trip for a day at the sea!