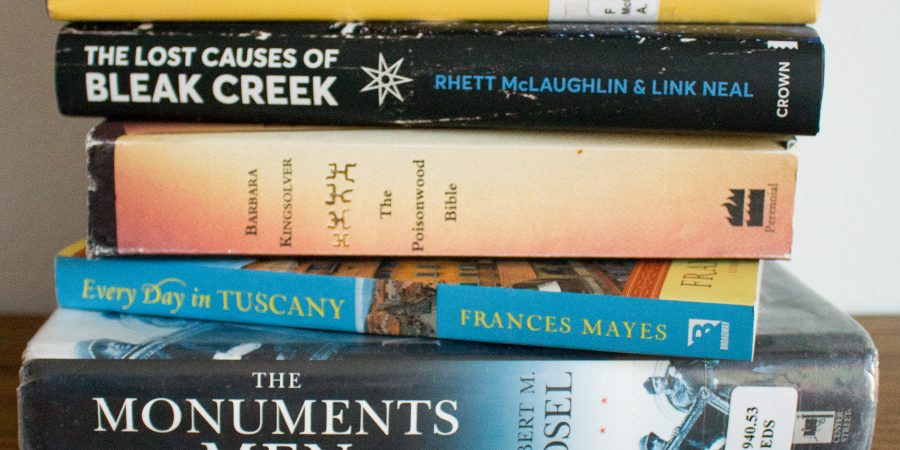 Since the summer probably means many of us have canceled travel plans, I put together my Italian reading list!

Since so many of us have cancelled travel to Italy this year, I thought I’d do my part and pull together my Italian reading list!

I know many of us have had to change or give up travel plans this summer. It’s been hard to let go of those things. Here in Italy, things are reopening slowly to tourism and but I know traveling over the Atlantic isn’t that simple yet. I hope that as the summer progresses we’ll see more chances to travel safely.

Quarantine season or not, I’m obsessed with travel lit and novels that describe their setting well. I’m always reading at least four books at once, and you can bet there’s a travel book in there all the time!

I’ve included both ones I’ve already read and some that I haven’t yet. My total Italian book list has almost 100 books on it, but these are at the top of list!

Under the Tuscan Sun, Frances Mayes

This is probably the most iconic Italian armchair travel. Under the Tuscan Sun follows a woman who uproots her life and buys to a run-down villa in Italy. She fixes up the house, meets her neighbors, and learns about food and life in Tuscany.

I’m including all of Mayes’ books under here as great additions to your Italian reading list. I’ve read most of her works and currently have Every Day in Tuscany sitting on my nightstand. Mayes published her newest, See You in the Piazza, in 2019.

In My Italian Bulldozer, food writer Paul Smith heads to Italy to finish his latest book and clear his head after a relationship unexpectedly ends. Upon landing in Rome, his rental car is mysteriously gone and the only option left is a bulldozer. So he sets out to the hills of Tuscany riding a bulldozer. The story is funny and fun and simple: literary comfort food.

Alexander McCall Smith is one of those authors who has such a specific tone that I knew, without having to check, that he wrote this book. His stories move calmly, almost meandering. He doesn’t rush past the character’s everyday life in search of the next plot point.

Beneath a Scarlet Sky, Mark Sullivan

A WWII story, but very different from any other I’ve read. Beneath a Scarlet Sky follows Pino Lella, first up to the Alps helping Jews escape. Later, he moves back to his home city of Milan and ends up working as the personal chauffeur of Nazi general Hans Leyers. I hadn’t heard of him, but he was called “Hitler’s left hand in Italy.”

Definitely worth a read! There’s a lot of WWII fiction out there, but this one tells a different type of story than most. It also gives a better view of what the war was like in northern Italy than most historical fiction I’ve found.

The story is told simultaneously on two timelines: a movie set on the Italian coastline in the 1960s, and in the present day in the US. The characters are complex and the story is fun, making it a great summer reading option.

I read Beautiful Ruins several years ago, so I’m a little fuzzy on the details. But what has stuck with are the descriptors of the settings in Italy: the small fishing villages, the sheer beauty of the coastline, the signs of WWII built into the landscape.

Confession time: unlike most of the world, I didn’t enjoy Eat Pray Love. I love everything else I’ve read by Elizabeth Gilbert (both fiction and nonfiction!), but I didn’t enjoy this one.

That being said, I did enjoy the Italy section of the book. Her descriptions of learning Italian crack me up. And who doesn’t dream of moving to Italy when their personal lives explode?

Another WWII novel, this time set in Venice. However, this one treated the war as a setting rather than being about the war. The Girl From Venice follows Cenzo, a young fisherman. He meets a girl on the run, helps her hide out in the maze of islands and inlets in the Venetian Lagoon. It’s a fun story.

The Jewels of Paradise, Donna Leon

I’m not even sure how to sum this novel up. Set in modern-day Venice, a researcher is assigned to go through a dead man’s documents, with the unspoken goal of tracking down a rumored family treasure. But it’s not in the same vein as The Da Vinci Code at all – it’s more sedate, thoughtful. The Jewels of Paradise touches on history, art, and gives a real feel for what it’s like to live like a local in Venice. Also, you won’t see the ending coming.

If you’re looking for pure nonfiction about the Roman Empire, read this. Starting with Romulus and Remus (and the other foundation myths I hadn’t heard before), Beard details much of what we know life in Rome specifically.

I enjoyed SPQR, but I’m a bit of a nerd when it comes to this stuff. If nonfiction doesn’t usually grab you, skip it. But if you want to beef up on some solid history that will 100% shape your next visit to Rome, check it out!

You knew it had to make the list. Are they super accurate? No. Are they fun reads set in places you can travel to? Yes.

For those who somehow haven’t heard it yet, the premise of The Da Vinci Code is that the director of the Louvre is killed and the body is covered in symbols. Symbologist Robert Langdon has to work through a series of secret clues hidden in works by Da Vinci. Angels and Demons follows a similar plot, this time focusing on the Catholic church and the Illuminati. They’re fun reads and great for the beach. Or, you know, a staycation day. 😉

A celebration of the language and culture of Italy, La Bella Lingua is the story of how a language shaped a nation, told against the backdrop of one woman’s personal quest to speak fluent Italian.

They had met and married on perilously short acquaintance, she an American chef and food writer, he a Venetian banker. Now they were taking another audacious leap, unstitching their ties with exquisite Venice to live in a roughly renovated stable in Tuscany.

Luca Amore runs a cooking school in the baroque Sicilian mountain town of Favio. He’s taught many people how to cook the dishes passed down to him by generations of Amore women. As he readies himself for yet another course he expects it to be much like all the others. He will cook, he will take his clients to visit vineyards and olive groves, they will eat together, become friends, and then, after a fortnight, they will pack up and head home to whatever corner of the globe they came from. But there is a surprise in store for Luca. This time there are four women booked in to The Food of Love Cookery School. Each one is at a turning point in her life. Each one is looking for something more than new cooking skills from her time in Sicily. A divorcee, a widow, an exhausted working mum and an unfulfilled top London barrister come together for this idyllic escape into the sun-drenched Sicilian hills, and a tantalising culinary adventure.

The story begins in the 1950s, in a poor but vibrant neighborhood on the outskirts of Naples. Growing up on these tough streets the two girls learn to rely on each other ahead of anyone or anything else. As they grow, as their paths repeatedly diverge and converge, Elena and Lila remain best friends whose respective destinies are reflected and refracted in the other. They are likewise the embodiments of a nation undergoing momentous change. Through the lives of these two women, Ferrante tells the story of a neighborhood, a city, and a country as it is transformed in ways that, in turn, also transform the relationship between her protagonists, the unforgettable Elena and Lila.

That Awful Mess on the Via Merulana, Carlo Emilio Gadda

In a large apartment house in the center of Rome, two crimes are committed within a matter of days: a burglary, in which a good deal of money and precious jewels are taken, and a murder, as a young woman whose husband is out of town is found with her throat cut. Called in to investigate, melancholy Detective Ciccio, a secret admirer of the murdered woman and a friend of her husband’s, discovers that almost everyone in the apartment building is somehow involved in the case, and with each new development the mystery only deepens and broadens.

City of Fortune: How Venice Ruled the Seas, Roger Crowley

A magisterial work of gripping history, City of Fortune tells the story of the Venetian ascent from lagoon dwellers to the greatest power in the Mediterranean – an epic five hundred year voyage that encompassed crusade and trade, plague, sea battles, and colonial adventure. In Venice, the path to empire unfolded in a series of extraordinary contests – the sacking of Constantinople in 1204, the fight to the finish with Genoa and a desperate defense against the Turks. Under the lion banner of St Mark, she created an empire of ports and naval bases which funneled the goods of the world through its wharves. In the process, the city became the richest place on earth – a brilliant mosaic fashioned from what it bought, traded, borrowed and stole.

Join the bestselling author of Ciao, America! on a lively tour of modern Italy that takes you behind the seductive face it puts on for visitors-la bella figura-and highlights its maddening, paradoxical true self. You won’t need luggage for this hypothetical and hilarious trip into the hearts and minds of Beppe Severgnini’s fellow Italians. In fact, Beppe would prefer if you left behind the baggage his crafty and elegant countrymen have smuggled into your subconscious.

The Monster of Florence, Douglas Peterson

In 2000, Douglas Preston fulfilled a dream to move his family to Italy. Then he discovered that the olive grove in front of their 14th century farmhouse had been the scene of the most infamous double-murders in Italian history, committed by a serial killer known as the Monster of Florence. Preston, intrigued, meets Italian investigative journalist Mario Spezi to learn more.

Delizia! The Epic History of the Italians and Their Food, John Dickie

Buon appetito! Everyone loves Italian food. But how did the Italians come to eat so well? The answer lies amid the vibrant beauty of Italy’s historic cities. For a thousand years, they have been magnets for everything that makes for great eating: ingredients, talent, money, and power. Italian food is city food.

Filled with kings and peasants, saints and ogres—as well as some quite extraordinary plants and animals—these two hundred tales bring to life Italy’s folklore, sometimes with earthy humor, sometimes with noble mystery, and sometimes with the playfulness of sheer nonsense.

What are your favorite books set in Italy? I’m always looking to add to my Italian reading list!

Looking for more travel inspiration? Follow me on Instagram or check out my Italy page for local life in Italy!