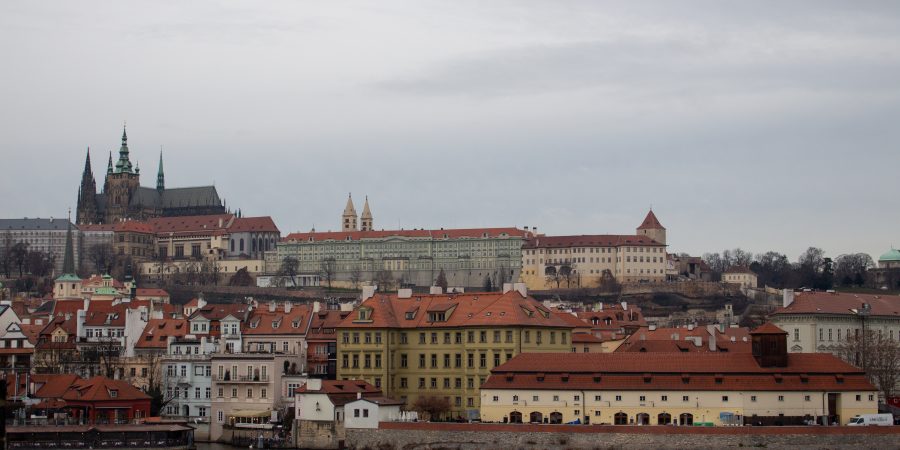 Much of Prague’s beauty is across the Vltava river from the more touristy Old Town and New Town! Here’s what you need to see of Prague across the river.

If you visit Prague and only see the classic Old Town and New Town, you’ve missed some of the best of the city! Lesser town, aka Prague across the river, is both beautiful and historic as well and is worth an afternoon exploring. Think of this as part two of my Prague travel guide.

One of the most iconic things to do and see in Prague, it towers over the city itself. You can either take public transport up to the castle, or walk across the Charles Bridge and walk up the hill yourself.

Getting Around in Prague

A quick note about transportation here: the simplest thing to do, especially if you’re going between Old Town and Lesser Town, is to buy a 24-hour pass. They’re very affordable, and if you need to you can buy tickets on the bus itself with a credit card.

Trams or buses connect much of the city and run regularly. It makes getting around easy especially if you’ve got kids or stuff in tow. Just make sure you do it right away because if they check and you haven’t purchased you’ll get fined!

What to See at Prague Castle

Prague Castle is the world’s largest ancient castle according to the Guinness Book of World Records and still houses the presidential palace. You can easily spend all day here but plan for at least a few hours if you want to buy tickets to anything.

Entry into the castle grounds is free, but you buy tickets to go inside any of the museums. There are tiered options and we went with the Circuit B ticket package, which gets you entrances into four sights and mini museums. Note also that you must pay extra to take photos inside the museum portions. This isn’t very common, but I’ve seen it a few times recently. It’s always cheap but still surprises me a bit. I guess in the age of everyone having a camera, it’s an easy way to make a bit more profit.

Changing of the Guard

An often-overlooked thing to see at Prague Castle is the changing of the guard. Every day at noon there’s a small ceremonial changing of the guard – nothing like Buckingham Palace, but cool nonetheless. It takes place at the main entrance, which if you walked up the hill, you probably didn’t enter by.

My favorite was probably St. Vitus Cathedral. It’s stunningly beautiful and the imposing Gothic architecture grabs you before you walk in the doors. Several Bohemian kings and Holy Roman Emperors are buried here, and the cathedral gets its name from hosting an arm of the of St. Vitus, or so the legend goes. There’s been a church in this post continuously since 1060 but in various stages of completion. The current version was only finished in the past century after mid-construction for nearly 600 years!

When you visit, don’t miss the stained glass. On sunny days it lights up the building, creating more glow than any other cathedral I’ve visited.

The Old Royal Palace is exactly what it sounds like. You can explore various chambers in the castle, including some kind of record room with some of the biggest books I’ve ever seen! Another room boasts all the various crests of key families of the era covering the ceiling.

After the grandeur of St Vitus, you’d think other churches wouldn’t even try – at least not within the castle walls. But the basilica of St. George brings a different tone to its space: it feels more intimate, somehow austere and comforting at the same time.

This small street is a bit unassuming after all the other exhibits, but I loved the reminder that castles worked as miniature communities. Not everyone got to be king, right? This series of buildings played host to the working-class men and women who lived on the castle grounds, creating their own mini economy. You can tour along the top to see exhibitions of weaponry and armor or walk along the street level to see recreations of homes, a pub, a fortune-teller and finally a prison.

There are also several museums at the far end of the cathedral owned privately by various noble families. We skipped these. But don’t mistake these as the castle’s museum when you first arrive! I almost made that mistake but luckily Logan was paying more attention.

While you’re in the area, go check out the nearby Petřín Lookout Tower. You can access it either by funicular from lesser town or walking/riding straight across the top of the hill from the castle.

The funicular is a bit of a mess in terms of organization – the bottom station is very crowded. If you don’t already have a ticket (a 24-hour public transportation ticket works here), then make your way through to the vendor on the far side. He can sell tickets much more quickly than the machines.

We did pay to check out the nearby Mirror Maze, which is a goofy mini-exhibit nearby. It’s one of those funhouse mirror mazes. It consistently shows up on Pinterest as a fun offbeat thing to do, and I love silly stuff, so I talked my husband into it.

My thoughts? I’m torn. It’s exactly as advertised: a mirror maze. The mirrors are kept really clean so it’s well done – your brain has a hilarious time processing it. But it’s really short for the $10 per person entry price. We weren’t racing through, taking our time enjoying it, and it was still over in maybe five minutes. Sooo…. fun but overpriced. Maybe good if you need to let your kids do a non-museum thing for a bit.

After I got home, I glanced at the back of the ticket and realized it would get us into other small exhibits throughout the city, including the Petřín Lookout Tower! Lesson learned: read your tickets. It was also good for entry into a few of the bridge towers and the City of Prague Museum.

It’s worth saying that Lesser Town is an underrated part of Prague. While tourists generally only pop in for a few key highlights, the area feels more everyday than the more popular sections on the east side of the river.

Lesser Town has plenty of history on its own, and because of the castle boasted more wealth historically. Currently, it hosts many of the embassies in the city and the Church of Our Lady Victorious, known for the Infant Jesus of Prague.

There’s also quite a bit of modern (read: a little odd) art scattered throughout. The John Lennon wall is always popular, but if you wander the streets you’ll find all kinds of sculptures!

Prague has quickly become a favorite city, and Prague across the river is one of the most underrated parts of the city! I’ll definitely be heading back soon. If you want more Prague tips, check out my Prague travel guide or my Prague restaurant guide coming next week!

6 thoughts on “Prague Across the River”