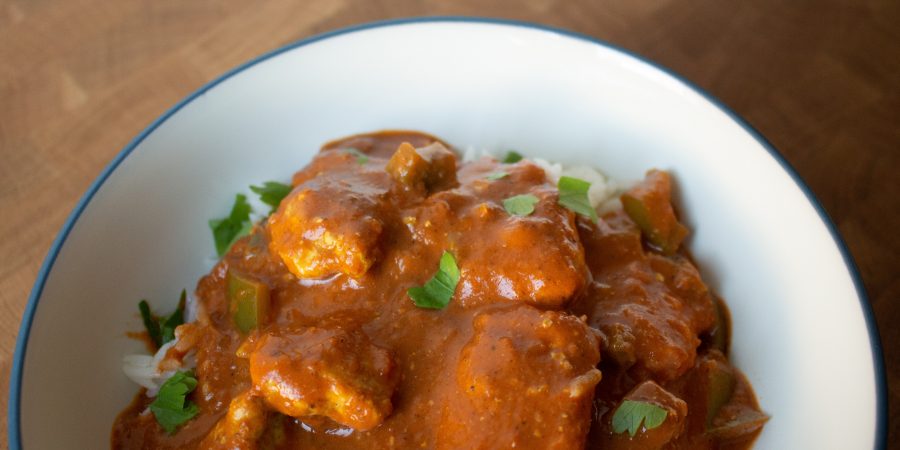 Chicken tikka masala might be my favorite Indian dish! Today, I’m sharing how to make it at home.

Chicken tikka masala is on every Indian menu. It’s the dish I always tell people to start with when they’re not sure about Indian food: it’s hearty and comforting, fragrant and spiced without too much heat.

Confession: I didn’t try Indian food at all until I went to college. My mom doesn’t love curry, so we never had anything resembling it growing up. That, combined with the fact that there weren’t a ton of options nearby as a kid, meant that I had a bit of a late start in the wonderful world of Indian food. But once I found it, I was HOOKED.

I don’t want to mislead: I don’t know if this qualifies as a weeknight meal in my mind. It takes at least an hour to prep and cook, and that’s an hour of paying active attention and stirring every few minutes. So maybe this is more of a Sunday dish when you can enjoy the experience rather than rushing through. But it makes a TON of food, so it’s worth the time and can feed you lunch all week long!

I took a couple of deviations from the most traditional recipe. For one thing, I added green bell peppers to the sauce: traditionally this would be served as one dish among many on the table, but I do not have my stuff together enough to manage a traditional Indian spread. So instead of making several veggie sides, I toss in some peppers to add a vegetable to my dinner.

At most of the restaurants in the US and Europe that I’ve had chicken tikka masala, it’s served with chunks of chicken breast. Here, I opted for chicken thighs because it stays juicier. My final adjustment is using coconut milk instead of cream — this isn’t required, but it makes it less calories without sacrificing that essential creaminess.

For marinating, plan for at least 3 hours, but longer is better. I often try to do this 24 hours.

Play with the spices! In my opinion, this recipe is very mild. Feel free to amp up the spices as you want – I wanted to offer a starting point that was fairly accessible to everyone. 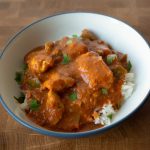 What’s your favorite Indian take out??