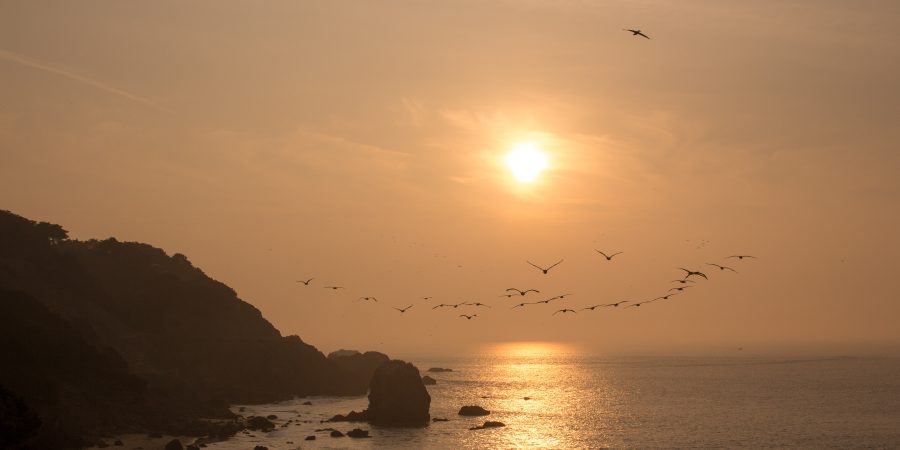 Like any big city, San Francisco neighborhoods each have their own vibe and attractions. Today, I’m sharing a few of my favorites that are worth exploring on your next trip!

There are about 53879592 San Francisco neighborhoods, each with their own character and feel. T are the ones you don’t want to miss on your next trip!

When you think of visiting San Francisco, you probably picture Fisherman’s Wharf. The iconic sign, the sea lions, and the piers are all in Fisherman’s Wharf. We decided to stay in this area just because it made getting to other areas because you can walk to several adjoining areas easily or take a cable car right next to Ghiradelli Square!

Speaking of, Ghiradelli Square is a fun spot to walk through but has mostly become a tourist trap. We didn’t say no to splitting a sundae though! If more adult beverages are your thing, The Buena Vista Cafe just one block over is famous for inventing the Irish coffee and rumor has it you can grab it to go.

Heading east, you’ll pass through an area choked with chains and tourist shops, but you’ll hit the famous Fisherman’s Wharf sign right next to the Boudin Bakery. Head in for a classic San Francisco lunch! But more on that in a future post.

A little further is Pier 39, home to the sea lions. I could’ve stood there and watched them all day! To find them, head all the way back and follow the signs: they’re behind and to the left of the restaurants if you’re facing the ocean.

It’s also beautiful to walk along the water and see the piers. Some are shut down, some are used for tourism, and some are still commercial, but cool to see the ways they’ve been transformed.

The Mission District has a history distinct from the rest of the city, and I loved seeing the layers of Spanish, Central American, LGBTQ and now influence on the area.

If you’re visiting, the Mission is known for a few things. It’s full of cool and funky murals, so a few hours wandering isn’t a bad way to spend an afternoon. There’s also the Mission Dolores, which is striking and Spanish and how the area got its name.

Also go check out Dolores Park, where you can watch cute dogs around, people being their best San Francisco selves, and take in the view of the Misson District and the city skyline beyond.

This is also an amazing foodie area. Mission-style burritos originated here, and you can get some fantastic Asian food around the Mission District too. I’ll be sharing a few favorites soon, so check back!

Haight-Ashbury is worth a visit for the people watching alone!

A hippie haven for decades, it’s a great area to spend a day walking around. With psychedelically colorful storefronts, it’s worth it for the window shopping alone! There are also quite a few bars worth checking out in the area, including a Magnolia Brewing location, which might have my favorite beer of the trip!

If you’re planning a walking trip, do it when you’re near the Mission District or the Painted Ladies. It ends at Golden Gate Park, so a break in the park after all that walking.

While not really a San Francisco neighborhood, it’s an area that you won’t want to skip. After so much pavement pounding, a day of walking in the windswept trees with the sound of the ocean pounding the rocks is perfection.

Lands End is technically a park. But it’s the least park-like city park I’ve ever seen – and rural and feels like you’re a million miles from a city.

You can take an Uber and get dropped off at the eastern end and make your way southwest. Near the beginning, you’ll find the Land’s End l, a stone creation that reminds me of a prayer labyrinth. The setting feels mystical and contemplative, the perfect spot to stop for a minute to take in the views.

There are several trails in the area, but maps near most trail splits make it easy to stay along the water for beautiful rocky views and coastal forests.

The trail ends at the Sutro Baths, now only ruins but formerly the world’s biggest indoor pool. Brave the walk up the hill to the parking lot to catch a ride back into the city or keep going a bit to the Cliff House, a restaurant famous for its views.

There are a ton more San Francisco neighborhoods worth checking out, like Chinatown, Little Italy and the Presidio. These were a few of our favorites areas and should make it onto your list for your next visit!

Planning a trip to San Francisco? Be sure to check out what top attractions you should see and skip! Next week? Restaurants!