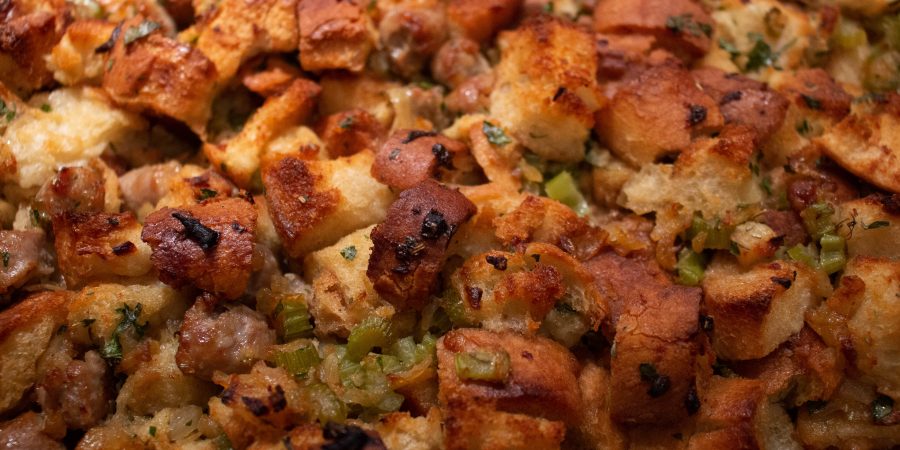 Y’all, I am not kidding: this is the best Thanksgiving stuffing I’ve ever had!

Growing up, I was NOT a fan. It was gross and soggy and weird and by far the least interesting side dish on the Thanksgiving table. There was a version that came down from generations past that no one ever questioned changing because Granny made it this way and we went along with it and kiddo Emma just had double mashed potatoes instead.

Our first Thanksgiving in Oklahoma we straight up didn’t have stuffing because neither Logan or I actually liked the stuff and it was just the two us. (Yes, I cooked a full Thanksgiving dinner for the two us because we’d moved to town a week before. I love Thanksgiving that much.)

But as I expanded my Thanksgiving dinner repertoire, I realized that enough people love it that it was worth figuring out what exactly makes a great stuffing. I had to know what people love about Thanksgiving stuffing. So I started experimenting.

The basics of stuffing aren’t complicated: bread, celery, onions, usually sausage, and seasonings. So I started experimenting, and this is what I came up with!

This stuffing is NOT your grandma’s soggy stuffing, on so many levels. It’s got the crispness of really good crusty bread with a slight softness of the baking process and amazing caramelization that shows up on the bottom of the dish, making it warm and comforting and cravable without getting mushy.

I’ve also realized the smell I associate most with Thanksgiving is STUFFING. Who am I?? I don’t even like stuffing!!! But as this baby bakes up, tell me you don’t start drooling over the combination of onions, sage, sausage and parsley bubbling away in the oven.

Best of all? The morning after, throw a couple of fried eggs on top of a bowl of stuffing and it becomes a fantastic breakfast option!

Don’t cook it inside the bird! First off, soggy city and that’s too gross. Plus, it’ll get wayyyy too overcooked in the process of cooking the turkey.

Let the bread get pretty dry, and don’t skip the oven part. You want to make this with bread that’s almost croutons. I chose to use baguettes to maximize the crust to inside ratio. I used about one and a half baguettes – you can base it on weight (roughly 1 lb of bread) or on loosely filling up a 9×13 pan.

Fresh vs. dry herbs: the perennial question. For Thanksgiving, I’m a fan of pulling out all the stops, and fresh herbs are an easy way to go the extra mile without much more work. But when hosting – or let’s be real, pulling together a meal for a group in any scenario – I believe in doing what works! Pull out the premade pie crust, use what you’ve got. Do what works. You won’t remember the bits that make the meal simpler, you’ll remember the people and the food and the silliness.

First, the bread: cut it up into bits. For a more traditional stuffing texture, cut it smaller. But I like it a little chunkier and went with 3/4-inch cubes.

Pre-cooking each bit separately allows the flavors and textures to develop – don’t skip this!

As each ingredient is ready, throw it in a bowl, then toss everything!

That’s it! Like all the best recipes, you can adjust the numbers to fit your tastes.

Bonus: serve this the morning after with fried eggs on top for the best breakfast ever. Seriously, so cravable and good – essentially it’s a hash with bread instead of potatoes 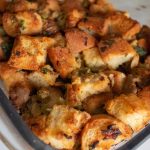 Need more Thanksgiving inspiration? Check out the side dishes page!