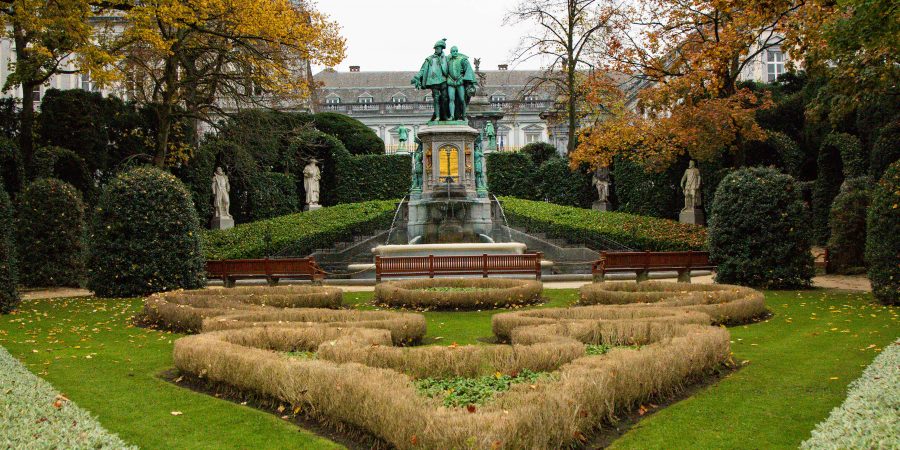 Thinking of heading to Brussels? Here’s everything you need to know before you go!

Before we dig into planning Brussels specifically, here are a few things worth knowing about Belgium before you go!

I start here because there aren’t a ton of quality resources from travel bloggers available! Frankly, it looks like most of the travel bloggers I found arrived in Brussels and stopped at the first chocolate shop they found without caring if it was really good stuff.

Belgium’s languages are French and Flemish, which is essentially a dialect of Dutch. However many folks also speak English in tourist-focused cities. The country is small – you can easily travel by train everywhere, which makes exploring so easy!

If you want to plan a trip to get a good taste of Belgium as a country, I’d aim for 4-5 days. You can see Bruges and Ghent in a day if you really want to, and then give yourself a day and a half for Brussels. I haven’t yet made it to Antwerp* but no full Belgium tour is complete without it!

To be clear, this is still a fast itinerary: each of these places has so much to do, see, and (possibly most importantly) eat. But it rubs me the wrong way when people check off an entire country in a day trip, so this is my attempt at a quick trip that still captures the essence!

What to See in Brussels

Brussels is a major metropolitan area with a ton of history, but it’s not a big city. It’s pretty walkable and most of the historic pieces are near each other.

The major charm of Brussels is to walk and explore. The architecture is beautifully old-school European with a uniquely Belgian twist. My favorite part is to just walk and soak it in, spreading out the chances to eat and drink!

As always, I highly recommend a walking tour. You really get a feel for a city with someone who loves it leading you around. They give the history, but also great anecdotal bits that no guidebook can retell. They also tell you the real take on life here: what neighborhoods have great food for less money, and the less tourist-appropriate stories about life in that city.

With that in mind, here’s a rundown of the major attractions of Brussels. Many of these will be included in a walking tour, so keep that in mind. I’ll try to tell you my favorites, and which are worth going out of your way to see versus swinging by if you’re already in the neighborhood.

This should be obvious, but the city has a particularly gorgeous main square. The Grand Place in French or Grote Markt in Flemish is bordered by Town Hall, but the real draw for me is the beautifully ornate other buildings. Each is gilded with over-the-top decor.

Historically, these gold-trimmed buildings are guild halls. Industries such as butchers, tanners, brewers, jewelers and more built ornately decorated headquarters on the Grand Place. Part clubhouse, part show of wealth, they’re gorgeous. A few are open to the public as museums.

Don’t forget to come back at night! They’re also gorgeous when lit up.

Can we be real for a minute? Why is this Brussels’ major artistic draw? It’s so…. bizarre. Our tour guide laughingly called this is Belgium’s version of the Eiffel Tower.

If you’ve never heard of it, Manneken Pis is a statue of a small boy, peeing into a fountain. The name of the sculpture means “little peeing man.” A version of it has been around since the mid-15th century, although the current one dates from 1619. The boy is only about 24 inches tall, which is the biggest surprise of seeing it in person.

Don’t get me wrong, you should definitely see it! It’s close to the center of town and easy to find when you’re exploring the city. Best of all, they dress up the statues for holidays and special occasions.

In 1985 they made a girl version, Jeanneke Pis. It’s tucked about 10 minutes’ walk away. It’s down an alley but completely safe, and next to Delirium Cafe – a must-visit bar for some excellent Belgian beer.

Les Galeries Royale Saint-Hubert sits only a block off the Grand Place and is a gorgeous semi-indoor shopping center. It’s not a mall in the American sense – it’s a glamorous place to drop a pretty penny. Whether you want to spend money or not, it’s a beautiful space so take a stroll through!

It’s a classically European arcade built in the 19th century. While the design screams opulence, they cut corners where they could: the second story statues are plaster. It also contains Neuhaus Chocolatiers, the original creator of Belgian praline, and Chocolaterie Mary, the first woman-run shop to gain traction as a chocolatier.

I’ll include two churches on this list. The first is the main cathedral, St. Michael & St. Gudula Cathedral. If you go, make sure to look at the pulpit – the carvings are gorgeous and so detailed.

It’s free to enter, but you can pay a euro and go downstairs to see the ruined foundations of the initial church built in this spot in the 10th century.

One of the oldest churches in Brussels, it’s named after the patron saint of traders because the market is right around the corner. St. Nicholas Church one also features a cannonball still embedded in the walls from the 17th century. The church survived the war but restorers left it in place, and it’s a sobering reminder of how much war gets into every part of life. I’m not including a photo so you can go find it yourself!

This is the best view of Brussels! Literally “mountain of the arts,” Mont des Arts home to the Royal Library, National Archives, and more. But the real draw is the park itself with great views of the city!

In addition to the views, there’s a small garden surrounded and several cool graffiti art displays on the surrounding buildings. At the top of the hill sits the Musical Instruments Museum, which has a rooftop cafe with fantastic views if you’re lucky enough to visit when it’s open!

Belgium has a massive comic culture, so it should be no surprise that the city is dotted with murals featuring comic book scenes and characters everywhere!

They’re fun to find, and if you wanted to make a scavenger hunt of it, the local tourism office offers maps of where to find them all. There’s also a comic book museum if you want to dive more into Belgium’s love comic books and graphic novels!

Chalk this one up to “I have no idea why this is a thing.” The Atomium a giant sculpture of an atom. That’s it.

I didn’t bother with this one. It’s a bit out of the way, so skip it unless you’re already visiting Parc de Laeken. Or you really like statues of atoms.

I’ll be honest, I also didn’t bother with this one. While I like some tours and buildings that fall in the category – I’m still obsessed with the United Nations building in Geneva – visiting EU Parliament felt… generic. The building is modern and sleek, which has less aesthetic appeal for me. You can book a tour for free, but you have to book in advance.

Don’t forget that Belgium is known for some great food! I’m devoting an entire separate to where to eat in Brussels, so look for that next week!

If you need more travel inspiration, follow along on Instagram – I’m currently traveling around with friends and sharing it all daily!