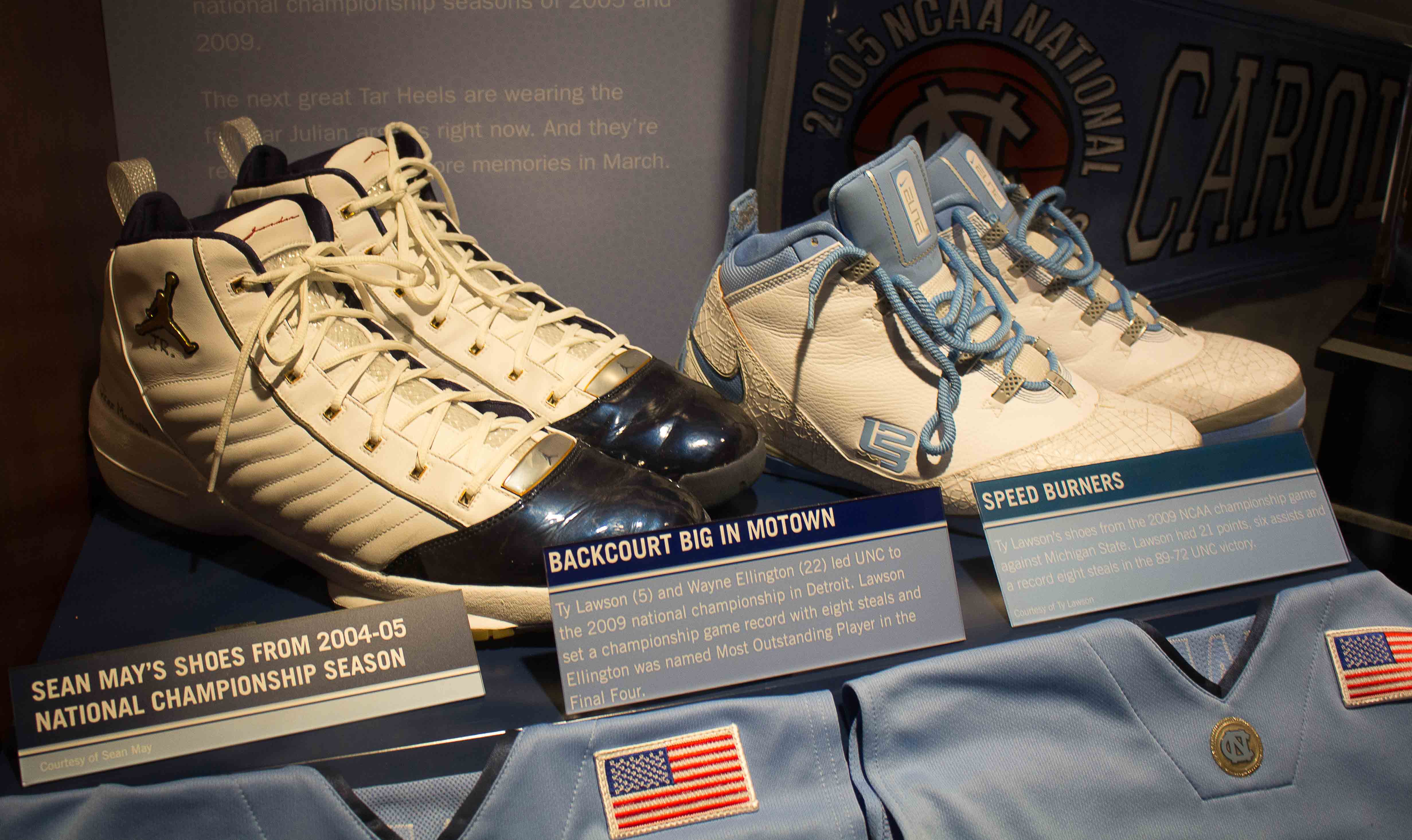 In honor of UNC basketball season kicking off tonight, I wanted to share one of Chapel Hill’s hidden gems – the Carolina Basketball Museum!

I say hidden only because I’ve grown up as a Tar Heel fan and lived near the campus my whole life, but I’d never been! So we decided we had to check it out before we moved.

My first impression was that it had way more paraphernalia than I was expecting.  Game balls, rings, uniforms, and even ticket stubs in addition to press clippings and medals.

You first walk in to a trophy room. They’re bigger than I expected, and it’s cool to see the ways the design changed over the years. They’ve also got rings from each championship – they’ve definitely gotten more blinged out recently.

The main room has a floor painted like the court, and stations throughout highlighting major players, coaches, positions, or some other aspect of the game. My favorite display was the one showing all the buzzer beaters on a loop.

Some of the stuff in there made me laugh, like the letter from Coach K responding to Michael Jordan after he made his decision not to attend Duke. The envelope had even been saved!

Seeing the size of players’ shoes was almost unbelievable. The photos don’t do it justice. Eric Montross’ shoes were at least double the size of mine, seriously!

One of the great things about UNC basketball is that there’s such a tradition of excellence. I know, those of you who aren’t UNC fans are probably rolling your eyes, but you can’t argue with 5 national championships spread over 60 years.

As someone who’s grown up on UNC basketball, it was so much fun to see uniforms from players there in my college days as well as names I grew up hearing as Woody Durham commentated. I spent countless winter evenings as a high schooler working the concession stand at the Dean Dome, and have fond memories of rushing Franklin Street as a student celebrating the 2009 National Championship.

If you follow college basketball, it’s worth checking out. If you’re a Carolina fan, you have no excuse. The hours are a bit weird (weekdays and Saturday mornings), but I think they open it before home games too, so build in some time next time you’re in town!

The links above contain affiliate links, which means I get a few cents if you book or buy something via that link. Feel free to use or not use! All images copyright Teaspoon of Nose.