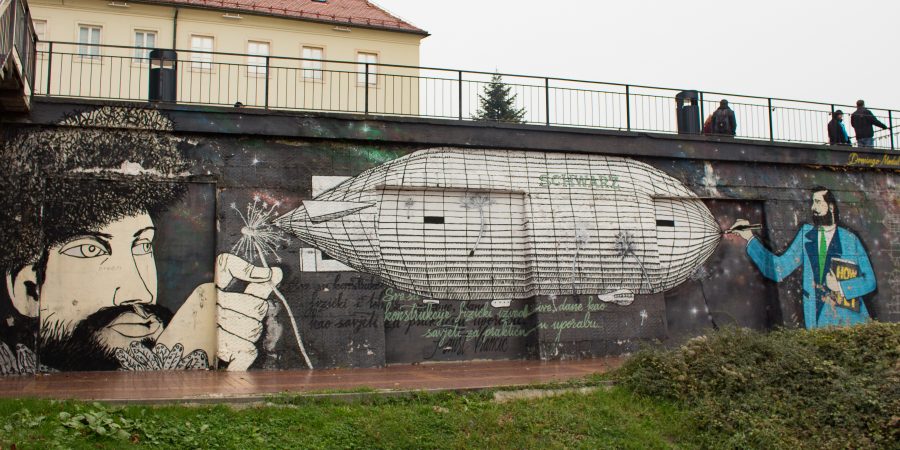 Zagreb is a seriously underrated spot to spend a weekend exploring! Here are some of my favorites parts of the city.

Thanks to Game of Thrones, Croatia has begun to see way more of a tourist influx in the past few years. However, much of that hasn’t been to Zagreb. So today I thought I’d share the best ways to spend a weekend exploring the capital of Croatia!

It’s also a very walkable city: we never even tried the cable cars that run through the center of town because there’s so much to see that’s close by!

Zagreb is divided into an Upper Town and Lower Town. Upper Town is the older medieval part of town, while Lower Town is more modern. Both are small and walkable, so definitely spend some time exploring both!

The Zagreb National Theater is bright yellow and unmissable if you drive into the city from the west. Home to opera, orchestra, and dramatic performances, it’s a gorgeous building and calls to mind old world elegance.

Zagreb hosts several churches and cathedrals worth seeing. St. Mark’s Church has a unique roof that’s one of the most iconic spots in the city! It sits in the upper town near one end of Tunnel Gric (keep reading for more on that!). The church isn’t open to the public for tours, but you can attend mass there if you want to get the full experience.

The Cathedral of the Assumption is also striking. The inside has the grandiose height of a cathedral but a much more spartan decor on the inside walls. Especially striking is the inscription taking up an entire wall – after doing a little research, I learned the script is called Glagolitic. It’s not a language, just a script for writing somewhat unique to Croatia.

I’m not sure if you’d classify this as architecture, but it technically is: don’t miss Tunnel Gric. It’s a WW2-era bunker tunnel that connects the upper and lower towns. It was reopened in 2016 as a way to cut through the two parts of the city. Walking through feels a bit otherworldly, and it’s long enough that you feel transported back in time.

One thing I loved in Zagreb was its street art!

Buildings and walls are coated in it, but it’s not the typical city graffiti you might expect. It ranges from delicate paintings of animals to odd scenes of indeterminate meaning to famous people. There’s also a courtyard full of Croatian inventors, who can claim to be the home country for inventors of the fountain pen and the blimp, not to mention Nikola Tesla.

There are also a few statues dotted throughout – not as many as Bratislava, but still fun to stumble across!

The Museum of Broken Relationships

Imagine a place where people are invited to send in stories and talismans of relationships that ended. The Museum of Broken Relationships started as a traveling exhibition but was so popular that the creators opened a standalone museum that people still submit to.

As you wander from room to room, each display has an item and an accompanying story or quote. Some are long and sad, others are weird or gross. It’s also fascinating to think about how people chose the single item that encompasses that particular relationship.

Running the gamut from hilarious to anger-inducing to weird to heartbreaking, the collection is a unique look into the way humanity deals with broken relationships.

The museum doesn’t just feature romantic relationships, either: they run the gamut from family members to friends to a particularly hilarious breakup with gluten for a celiac.

One note: this is a solidly PG-13 museum, so families keep that in mind.

Rather than try to squeeze a few recommendations here, I’ve created a separate post with suggestions. Whether you’re looking for high end, affordable meals, or breakfast, I’ve got some suggestions.

If you’re in an Airbnb and want to cook, I highly recommend checking out the Dolac Market! It’s open daily and you can find all manner of colorful, fresh ingredients from local farms.

What I’ll See Next Time

There are a few museums that I wished we had time to check out. So if you’re in the mood for art or need to stay busier than what I’ve shared already, try some of these!

The Museum of Naive Art sounded cool – the title made me laugh at first because I didn’t know the usage here. It means artists who haven’t formally trained in their medium.

Goofy, but consistently well-rated: the Museum of Illusions looks silly and fun. Think optical illusions and tricks on your eyes.

On a more somber note, the Image of War Photography Museum catalogs the Croatian War of Independence in the 1990s. I’ve read good things about this museum, which documents a conflict I know so little about.

Also, the single biggest draw to bring me to Zagreb? Their Christmas markets! The entire city transforms into a Christmas wonderland, and it’s consistently rated one of the best on the continent. That combined with the reasonable hotel and Airbnb rates make a return trip a no brainer!