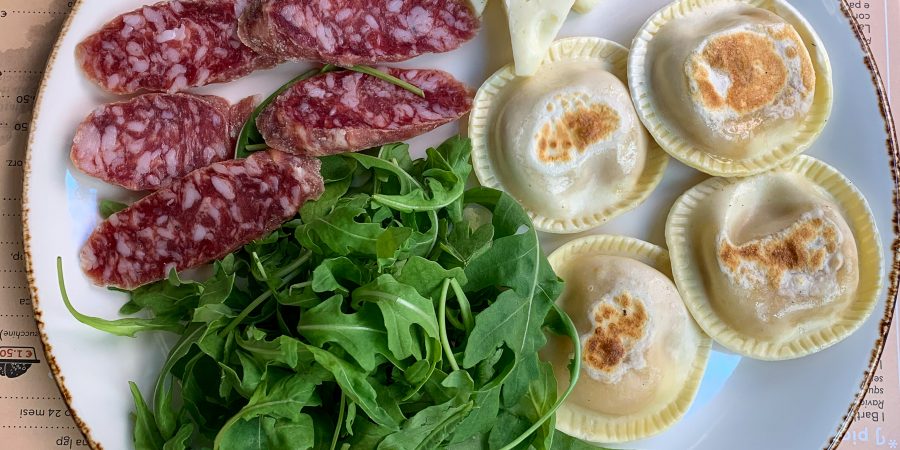 No visit to Bologna is complete without eating great food, so I’ve rounded up some of the best Bologna restaurants to maximize meals!

Bologna may not make it on your Italian radar yet, but it should! Widely considered the food capital of Italy, Bologna is home to many of our most beloved Italian meals. When we visit Bologna, it’s 90% for the food and 10% for the sightseeing/beauty/architecture/everything else. So here’s what to look for on a Bolognese menu!

There are several classic Italian meals that got there start here. Here are the don’t-miss parts of every menu!

Tortellini: Did you know this favorite pasta shape is based on Venus’ bellybutton? It’s said that Venus spent a night in a small tavern, inspiring the owner to create the tortellino. Typically stuffed with meat and bit of Parmagiano, the most traditional dish is tortellini in brodo, in broth.

Tagliatelle al ragù: Long pasta noodles in a meat sauce. In general, not all ragù has tomatoes, although this traditional one from Bologna does. Don’t confuse it with bolognese sauce, which doesn’t actually exist in Italy. Don’t order it if you see it; it’s only there for the tourists.

Lasagna: While America’s idea of lasagna is delicious, it’s not quite traditional. The most traditional version hails from Bologna. It has relatively less sauce and cheese, but it’s still so delicious you won’t leave a bit behind!

Piadina: technically referring to the Italian flatbread . It’s original to this region, and they fill with the most delicious of their local ingredients: mortadella, Parma ham, prosciutto, or Squacquerone di Romagna (an oozy chesese that is truly irresistble)! It’s a great quick lunch or way to get a lot of local ingredients into one bite.

If you have a quick trip and can only get one meal, eat here. It’s that good. We had our first meal of the weekend here and it was the best one! A great choice to order tortellini in brodo, along with a local bottle of Lambrusco. Tortellini in broth sounds so simple, but when it’s really well done, it’s packed with flavor without being too heavy. Their tortellini filling is a mix of pork, beef, parmesan, and seasoning – flavors cooked to perfection!

Da Cesari’s specials change seasonally and we had a beef carpaccio that perfectly balanced with giardiniera, so refreshing on a hot day! They also tend to fill up fast, so book ahead if you can.

Grassilli is another classic Bologna, restaurant with a great (local!) wine list. You can choose to sit outdoors on the road – closed, don’t worry, but there’s something so perfect about a table on the cobblestones – or inside where the walls are packed with black and white photos of famous italians. Either option gives such an old-school feel and you’ll love it.

They offer a particularly delicious cotoletta– essentially a breaded cutlet of veal or pork (veal is most traditional) topped with mortadella and a delicious cheesy sauce. It’s a heavier dish but delicious, so if you’re here, order it!

Osteria dell’Orsa is a great casual spot! It’s near the part of Bologna with good bars, so the perfect meal to kick of a night exploring the nightlife. (Bologna’s pretty small, so this is more to communicate the feel of the place than anything else.)

It captures a great casual feel, the kind of spot where you end up swapping travel stories with the neighboring table. The lasagna here is GREAT, and a nice touch is that they have really good Italian beer! That’s not a common thing in Italy, especially being spoiled by American breweries.

Their sister restaurant Jukebox Cafe next door has some of the best burgers I’ve had in Europe, so if you need a break from Italian food you can’t go wrong here. You can order food from either place at both restaurants.

Ca’ Pelletti is my hangry option: when you’re desperate for good food that’s easy to find but still delicious. It was recommended to me by a local and it didn’t disappoint!

Ca’ Pelletti is a local chain. Calling it fast-casual feels like an insult to the quality here, but the style of the restaurant fits the model: delicious food served fast. The tortellini is delicious here, as well as the piadina if you haven’t tried that yet! I may have ordered both. No judgments right, I’m doing research!

Not a restaurant, but a bar. Le Stanze merits a mention on ambiance alone! It’s a bar set up inside a former church. Imagine drinking a gin and tonic in a baroque church, and you’ve got it! It’s a cool, modern bar, set inside a private family chapel for the Bentivoglio family. Their menu is fun but they’ll make you whatever you want if you don’t see something that grabs you!

If you go in summer, consider making a reservation: the bar has good cocktails, but you lose some of the effect if you sit outside.

Gelato is a staple of the Italian diet, but not all gelato is created equal! Here are my favorite gelato spots in Bologna.

Hands down, the best gelato in the city. It’s creamy, it’s rich, and it’s packed with flavor. Cremeria Santo Stefano will be full of locals and tourists in equal measure, so don’t be surprised if you have to wait in line for a few minutes. But never fear, it’s worth it! They have amazing deep dark chocolate (called fondente cioccolato) and the grapefruit (pompelmo rosso) and strawberry (fragola) were both so refreshing!

If you’ve done much searching on Instagram for Bologna, Cremeria la Vecchia Stalla has probably shown up. Their iconic waffle printed with their name just begs for a photo! They also have a great variety of flavors: both classic Italian and unusual options. I had one of the best caffe gelato I’ve ever tasted – great coffee flavor dotted with bits chocolate. Still thinking about it.

That being said, it wasn’t actually the creamiest gelato I’ve had, even just within the city of Bologna. It’s good, better than many of the tourist-aimed shops. Just not the best.

So with that in mind, I’d advise two gelato runs – one to La Vecchia Stalla when you’re exploring the main local sights, and another to Santo Stefano when you’re willing to walk an extra ten minutes for the best gelato in the city!

You’ll adore Bologna! The food is unbelievably good. I hope you find some of the best Bologna restaurants have to offer!