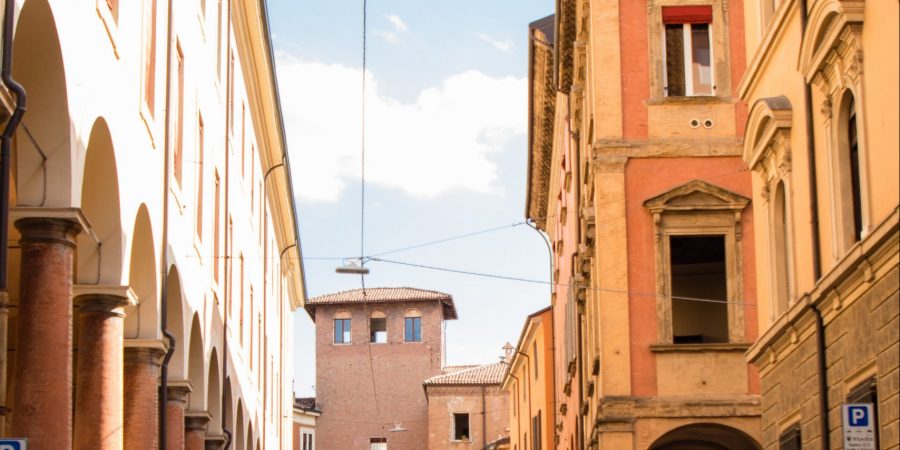 In between fabulous meals, there’s plenty to see and do in Bologna! Here’s what you need to know to plan your trip to Bologna.

Real deal: people visit Bologna for the food, and you should one hundred percent plan your trip around eating well. Tortellini, lasagna, and mortadella all originate from this area, so you know you’re going to eat well!

Whether you spend a day or a weekend in the city, there are a few things you should plan to do or see in Bologna!

In Italian there’s a saying about Bologna: la dotta, la grassa, la rossa. It translates to “the learned, the fat, the red,” and it fits!

The learned: Bologna can also claim the oldest university in the world, operating since 1088. Famous students include Petrarch, Copernicus, Enzo Ferrari, and several popes. While I don’t know that it’s quite a “sight” per say, it’s a cool claim to fame.

The fat: obvious, and completely earned. Pack your stretchy pants. For all the places you should eat, peep my full list!

The red: The city’s architecture is largely brick, creating a unique feel from other classic Italian destinations. More than the brick, Bolognese architecture is characterized by porticos. YOu’ll see these everywhere. From ornately-painted ceilings to utilitarian brick columns, they cover the spectrum of decor.

Overall, Bologna is a great city to stroll and see. Or in Italian, fare un passagiata – take a walk, but in the sense of to see and be seen.

The biggest attraction in the city are the due torre, the two towers. They sit in the center of town, only a block from the Piazza Maggiore. Torre degli Asinelli, the taller one, is open for climbing. However, please please please plan ahead and book this in advance – there are limited spots available! It’s easy to do online and not expensive.

Locals are very proud that Torre degli Asinelli is significantly taller than Pisa’s famous tower. While it doesn’t lean quite as much, it’s sister Torre Garisenda leans significantly more!

The views are incredible! Walking the 498 steps may take a bit of time – they’re steep in places, you feel the enough lean of the building just enough to make your balance confused. But it’s worth it! You can see 360° through the tower’s windows, creating that beautiful rooftop view that’s so iconic in European cities.

Nearly every Italian city can claim a gorgeous church or cathedral, but Bologna has a few worth visiting. Instead of a detailed rundown of each one, here are the quick hits for the ones you should be aware of:

Basilica di San Petronio sits in the Piazza Maggiore and has decidedly less ornate decor. But it’s gorgeous, more light and airy than your typical basilica. It also claims the oldest organ currently in use and the world’s longest sundial.

Basilica di San Domenico is dedicated to St. Dominic, founder of the order of Dominican friars. He’s also credited with creating the rosary. The church includes work by Michelangelo.

Basilica di Santo Stefano is a complex including seven “churches” and is said to be modeled off Jerusalem’s Church of the Holy Sepulchre.

Cattedrale di San Pietro is considered the main cathedral of Bologna. The Baroque style is elegant and beautiful. We were lucky enough to visit one night when the organist was practicing, and the space feels incredible. Don’t miss the cutouts in the floor in the front right side to see restoration work being done below.

Just a reminder: most churches require shoulders and knees to be covered, so plan ahead if you’re hoping to go inside. San Petronio sells covers, but the others didn’t appear to.

Another church, yes. But this one merits its own category because of its location! Sitting on a hill overlooking the city and surrounding countryside, you can see how Santuario di Madonna di San Luca feels like a retreat from normal life.

The basilica is beautiful and the exterior is somewhat unique in Italian churches. At certain hours of the day, you can pay a small fee (3€ as of August 2020) to climb to the roof and overlook Bologna. Seeing the interior workings of the church as you go reminded me of a miniature version of climbing the Duomo in Florence. You can also pay an additional amount to see the crypt below, but we skipped that.

Traditionally, pilgrims would walk the 3.8km (2.3 miles), covered entirely with porticos. Plan for it to take 1.5 – 2 hours each way, because it’s a pretty big hill.

Don’t want to walk? There’s a tourist train that makes the trip, costing about 10€ each way. You can drive yourself up, though you may have to get a little creative with parking.

We opted to drive to Bologna because it’s so close. You may want to drive because there’s so much to do in the surrounding area! A car will let you go to dreamy places like nearby Modena (home to balsamic vinegar) and Parma (parmesan and Parma ham).

If you drive, take note of the ZTL. Like many Italian cities, the historic center has a ZTL, meaning driving into the historic part of the city in daytime is prohibited. I explain more about ZTLs here, but the short version is you can’t drive into the city during business hours without a crazy fine. There are ways around this; some hotels can arrange to get you a permit to do so. But Airbnbs likely won’t be able to.

Because of this, we opted to stay outside the historic section and drive in. There are several parking lots just outside the walls, making it easy to park and walk for the day. From my research, Parcheggio Ex-staveco was cheapest for both hourly and daily rates and takes credit card.

If you’re arriving by train, the station is just along the city walls, so no stress about getting to your accommodation within historic Bologna.

We opted for a nicer hotel a bit further from the city center. I found a great deal at the Savoia Hotel Regency. This is one of the reasons why I check both Airbnb and aggregator sites like hotels.com for every trip: my go-to is Airbnb, but sometimes you can find amazing deals for all the lovely amenities a hotel offers!

Our stay at the Savoia Hotel Regency was lovely. It included an elegant continental breakfast (seriously, possibly the nicest one I’ve ever seen) and had a gorgeous pool and lounge area. A bonus: it’s pet friendly!

Bologna is a food city, no doubt. (Check out my Bologna food guide for the details!) But one of my favorite things about a weekend here is that there’s plenty to see but no pressure to go to every museum or tick off boxes. Prioritize meals and walk around in between, and you’ll have a glorious time.

If you only have a day, my suggestion is to book your Torre degli Asinelli tickets in advance, and spend any remaining time between meals strolling the streets, sticking your head into the beautiful churches as you see them.