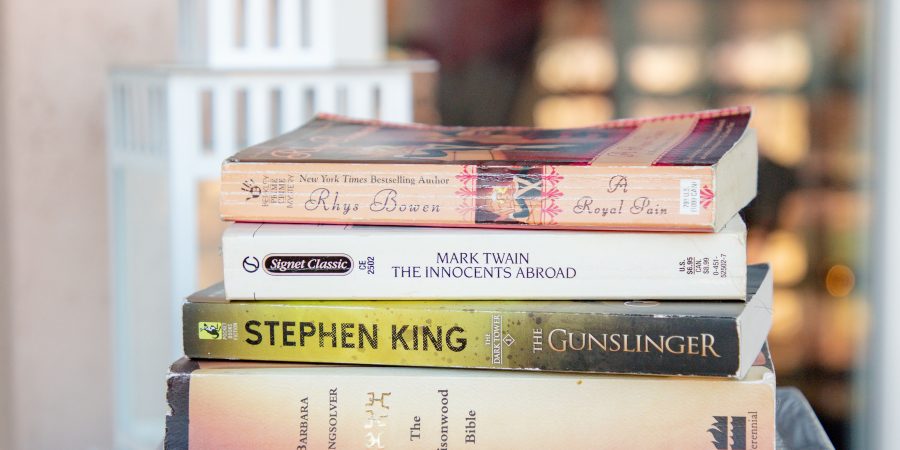 A roundup of the best fiction books of 2020 to inspire your reading list!

One of my favorite parts of the end of the year is looking back on everything I read. I read a lot – 129 books this year, 99 of which were fiction! – so at the end, I round up my top ten favorite books.

The best fiction books of 2020 ran the gamut of genres, but the list definitely skews more cheerful than the previous year. With the toughness of this year, I needed my entertainment to be entertaining. Anybody else feel that way?

That being said, there are a few dark thrillers that made my top ten list fiction books of 2020. One of them played with that line between horror and thriller so much that while reading I couldn’t decide if I liked it or not! But that’s often the sign of a great thriller.

As always, this list isn’t ranked except this year I put my favorite read of 2020 at the very end!

The Ballad of Songbirds and Snakes, Suzanne Collins

I didn’t think I’d love this one as much as I did. I loved The Hunger Games, and I’m a sucker for origin stories. But President Snow is so vile in the trilogy that I didn’t think Suzanne Collins could convince me to both like him initially and create a realistic scenario that shapes him into the man he becomes. She 100% does.

Knowing where the character ends up as an adult creates a tension as he moves through his first experience of the Hunger Games. I do think the romance angle feels goofy and forced, but I loved seeing the ways he – and the hunger games themselves – were shaped.

A mysterious book found deep in the library stacks sends Zachary on a magical adventure. Like Morgenstern’s previous novel The Night Circus, The Starless Sea has a gorgeously woven world that sucks you in deep with her vivid imagery. I almost don’t want to say too much about the story, because the plot is so much about the journey of the story. I love the way Morgenstern takes that magic world and sets it such that it bumps up against the real world at so many angles. Told by several different characters, it’s a great candidate for audiobook listening!

By the author of Crazy Rich Asians, it’s very much the same vein. A fun, dramatic story of how the ultra-rich live and love. Sex and Vanity tells a classic annoyance at first sight that grows to love. The settings – Capri, the Hamptons, and NYC – are as much characters as the humans in the story, and I always love a book that transports you. A great beach read, or something to pick up when you need a break from the intensity of current events.

The Turn of the Key, Rachel Ware

If you like The Woman in Cabin 10 (also by Ware) or The Girl on the Train (by Paula Hawkins), you’ll like The Turn of the Key. A woman becomes a live-in nanny for a young family living in remote Scotland. Yet the situation quickly becomes a nightmare when she’s left alone for weeks, the kids are creepy, and the seemingly perfect smart home tech goes haywire.

There’s a fine line between horror/scary stories and thrillers, and this one flirts with it. It’s the kind of book that you barrel through because you just have to know what’s going on. While one of the main twists was pretty predictable, the plot will surprise you and grab you until the final pages.

I read less historical fiction this year, particularly those set during WW2. The stories of hardship and valor hit too hard this year. But The Spies of Shilling Lane had a great balance of fun and gravity. Mrs. Braithwaite is ostracized in her small town after her husband leaves her, so she decides to visit her daughter in London. However, her daughter is nowhere to be found at her boarding house and no one seems to know nearly enough about her whereabouts. Braithwaite gets sucked into bigger machinations as she looks for her missing daughter. The story is told in such a way that it feels funny and light even as her character deals with the realities of war and the rapidly-changing societal roles of women.

City of Girls is the latest from Elizabeth Gilbert. Set in 1940’s New York City, it follows a young woman who moves in with her aunt. The books is fun, but with an undercurrent of sadness: the story feels fated for disaster from the beginning. Being told as a letter from many years later gives great shape to what could feel like a two dimensional story. It’s one of those books you can absolutely see as a movie, and a film is currently in production.

Can I include a book that I haven’t actually finished? Normally I wouldn’t, but The Lions of Fifth Avenue has been so captivating that I had to include it. It follows two generations of the same family set 80 years apart. Both women are deeply connected to the New York Public Library, and find themselves embroiled in a series of book thefts that threaten their livelihoods. They’re also finding their place in the world as women – do they take the traditional paths? Do they leave behind what they’ve already built for a new trail?

I can’t comment on how the whole thing wraps up yet, but one of my favorite things is the way Davis masterfully weaves the two stories together. Tantalizing hints pop up through the other’s story without being heavy-handed. Definitely worth picking up.

The Wife Between Us, Greer Hendricks & Sarah Pekkanen

A darker story than most on this list. The Wife Between Us is a thriller about a marriage. Because I don’t want to give anything away, I’m just going to paste the blurb from the website:

When you read this book, you will make many assumptions.

You will assume you are reading about a jealous ex-wife.

You will assume she is obsessed with her replacement – a beautiful, younger woman who is about to marry the man they both love.

You will assume you know the anatomy of this tangled love triangle.

I feel like this is a great setup for the book. Read if you like thrillers that delve into interpersonal relationships.

A very similar read is this: different “solution” but similar premise.

One Day in December, Josie Silver

I love this kind of story: One Day in December follows three people through a decade of life in London. It’s about romantic love as much as it is about friendship love, and it’s heartbreaking in all the good ways. Laurie has a love-at-first-sight moment with a stranger on a bus and spends the next year looking for him. Her best friend Sarah tries to help, to no avail. A year later Sarah gushes over her new boyfriend, who turns out to be Bus Guy.

If you read this and loved it, also try this and this.

Oona Out of Order, Margarita Montimore

Oona Out of Order was my favorite book of 2020! The story had that perfect balance of fun and thought-provoking: on her 18th birthday, Oona wakes up at age 51. But she hasn’t been in a coma – she’s been living her life, she just doesn’t experience the years chronologically. Without getting bogged down in the science fiction of that, it’s a great premise about what we value out of our lives and how we spend our time. She gets to re-shape herself a bit each year because she doesn’t know where in her life she’ll jump back into. It also does a fun job of brining in nostalgia from each era of pop culture.

These are my favorite fiction books of 2020! I share this list every year for more reading inspiration. And check back next week for my favorite nonfiction this year!