If you do one thing in Huntsville, Alabama, you should visit the U.S. Space & Rocket Center! 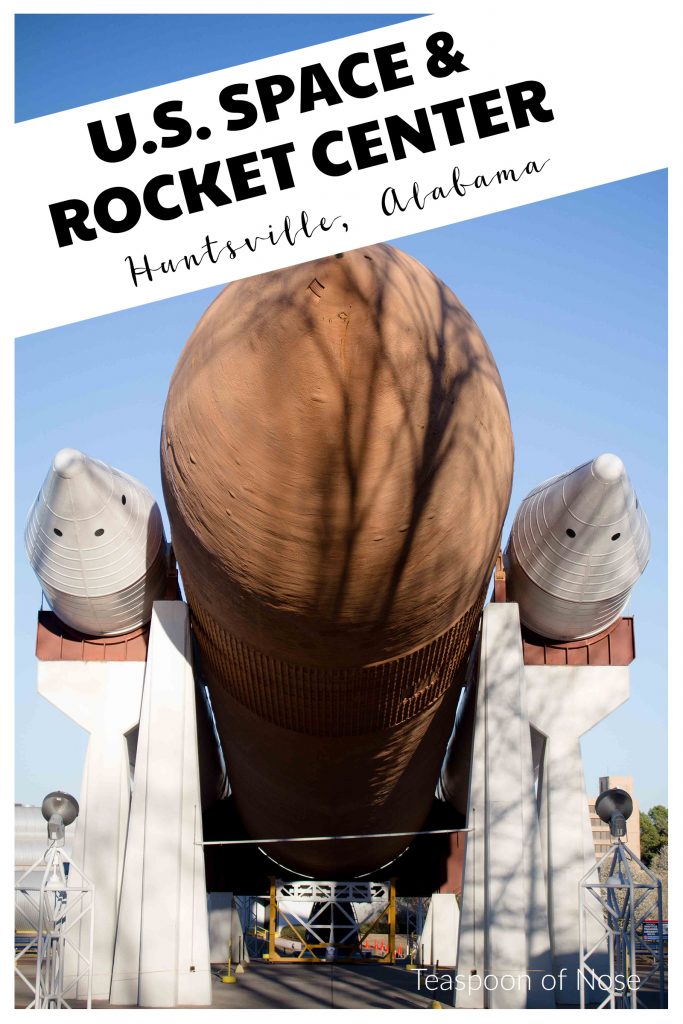 In my previous trip to Huntsville I had an absolute blast. But I missed checking out what is the arguably the biggest draw to the city: the U.S. Space & Rocket Center! So when I came back down south during my spring solo road trip, I knew I needed to visit.

The museum starts teaching in the parking lot. There are stands giving some quick facts about each planet. At first I thought it was to help you find your car in the lot, but then realized they laid out the planets in their relative distances from each other as you walk to the entrance! Well done, you.

The main building houses the non-rocket stuff. There’s a very cool space station exhibit, showing how it was built (in space!) and how the astronauts live. If you can, do the guided tour through it – the staff knows so much and is quick to point out some of the less-noticed interesting pieces of living in space! For example, one identical twin went into space for almost a year while the other stayed Earthbound, and scientists studied the differences before & after! Spoiler: the astronaut was 2 inches taller when he came back. What?!?

A large temporary exhibit takes up most of the space. Currently it’s about the planets, and it’s so well done. I’ll be the first to admit that my eyes tend to glaze over when things get really technical and science-y, but everything is interactive and fascinating! This exhibit culminates in a massive theatre-like room where you can study each planet’s surface on nearly 360°  worth of screens! My biggest takeaway? Jupiter is shockingly beautiful. 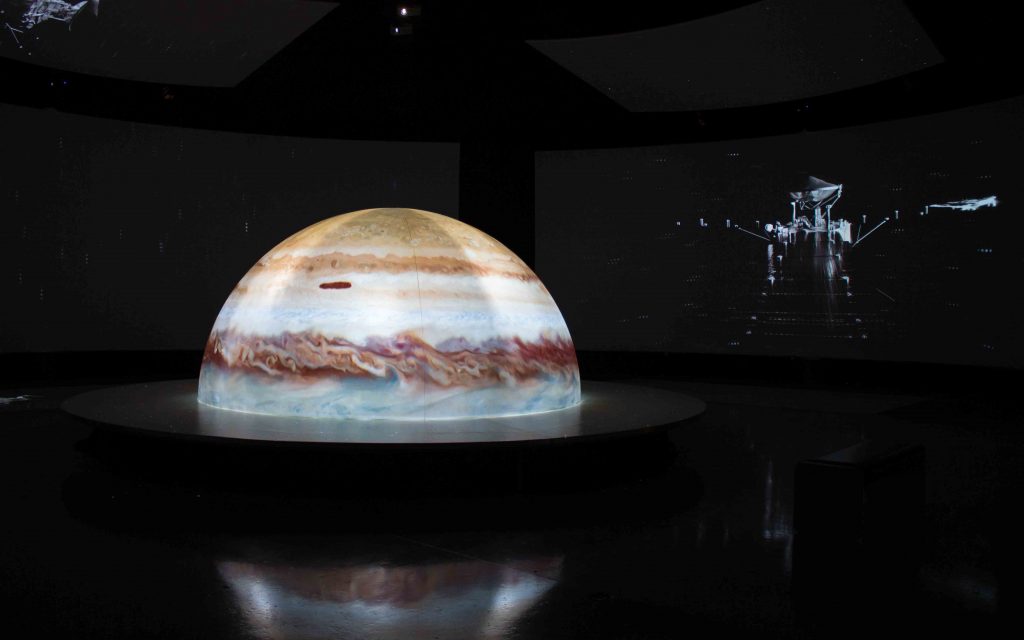 There are lots more things to see in here, but I’ll skip ahead and let you check those out for yourself. Outside, you can find retired vehicles (rocket, lunar and army) spanning 70 years. Even more fun are the rides. They’ve got a couple rides that remind me of the fair, but actually teaching you a little about astronaut training! My favorite is the G-forces ride, which spins you enough to guarantee walking a little wobbly afterwards. If spinning is not your thing, you’ve been warned.

Next up: the important stuff. The rocket room. As I wandered, several staff members told me to make sure I go up to the second floor of the second building (the Davidson Center), because that’s where most of the “good stuff” was.

Once again, I jumped on a guided tour. Everything is in one massive room, dominated by the Saturn rocket hanging in chunks above your head. They have a concrete one standing upright outside, but somehow it’s so big I couldn’t get a feel for just how massive it was until seeing it in pieces hanging  horizontally. It’s GIGANTIC. Which, of  course it is Emma, it had to get into space. But still. Huge. 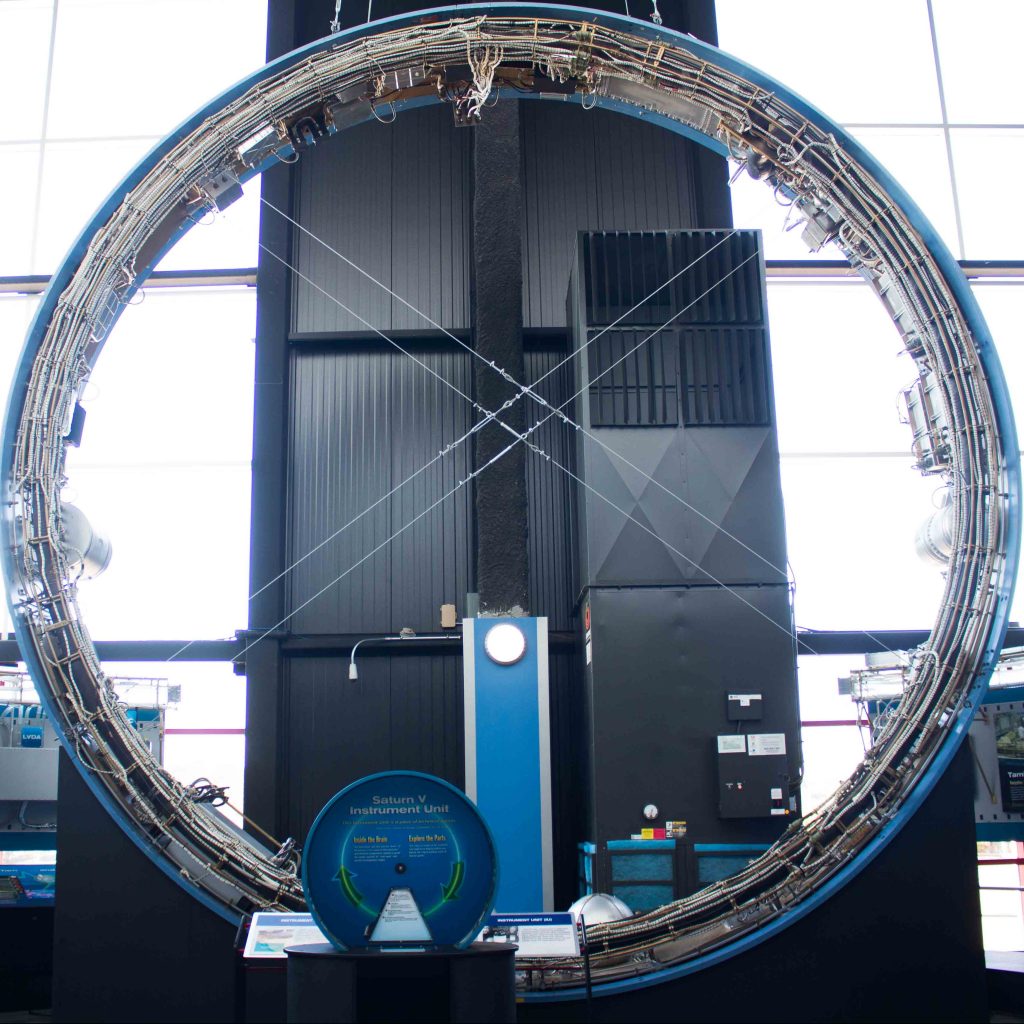 Definitely jump on a tour if you can. They do such a great job of highlighting everything to notice. Our tour guide pointed out how each part fired and disconnected to get the final pieces to the moon.

My favorite moment was when she led us to a giant cylindrical piece of metal that hooked between two sections. Known as the “brain,” it’s the spot that controlled a lot of the actions taken by the rockets. It has less computing power in it than a singing greeting card.

WHAT THE WHAT, PEOPLE.

WE SENT HUMANS TO SPACE IN SOMETHING THAT HAD LESS TECHNICAL COMPLICATEDNESS THAN A SINGING GREETING CARD.

Also worth laughing over: the airstream that was used as a quarantine for astronauts post-mission. You know, in case of moon germs. 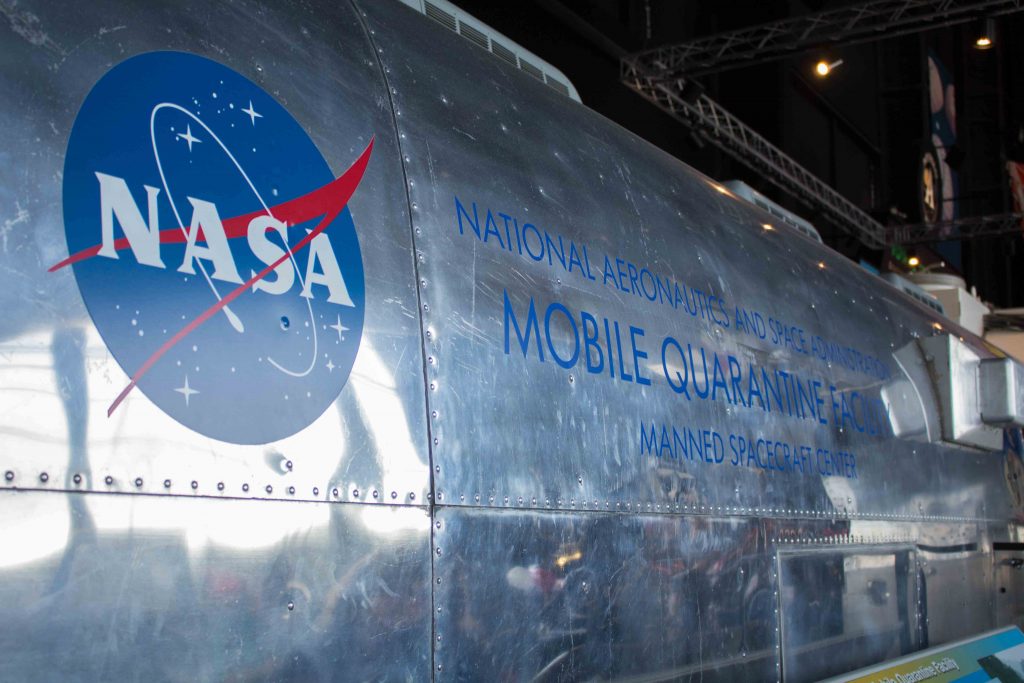 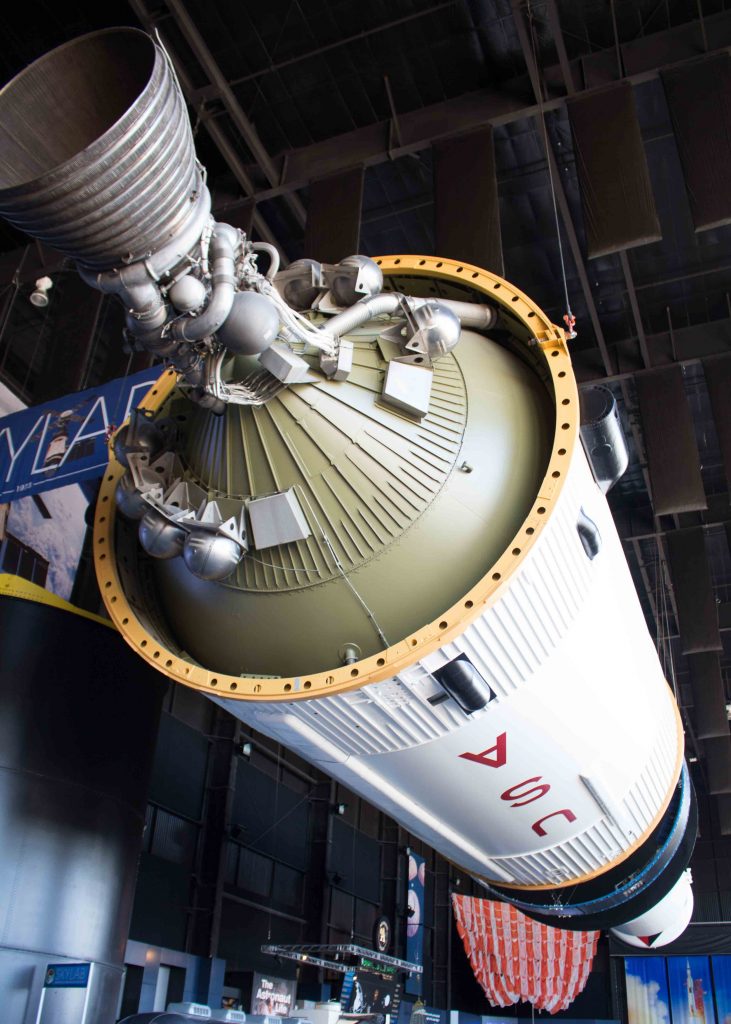 As we’re doing our tour, I noticed a couple of people walking around in white NASA lab coats. A little cheesy, I thought, to dress some of the tour guides up. But then one spoke with our group and I realized that the lab coats indicate people who’d actually served in the NASA program. We got to talk to the people who helped build the very things they were explaining to us! So cool!

As a twentysomething, I’ve grown up in a world where space has always been traveled. It may sound dumb, but it feels like my generation doesn’t really grasp the enormity of the accomplishment of it all. It’s a testament to human ingenuity and a triumph of technology, of largely pre-computer/Internet technology. It’s absurd!

We not only launched things into outer space, but brought them back! With people on them! Who stayed alive! And then walked on other planets! And then made it back! Also still alive!

My point is that I for one don’t really think about how crazy that is most of the time. And I don’t think my generation does very much either. We’re desensitized.

So this museum feels doubly important for that reason. 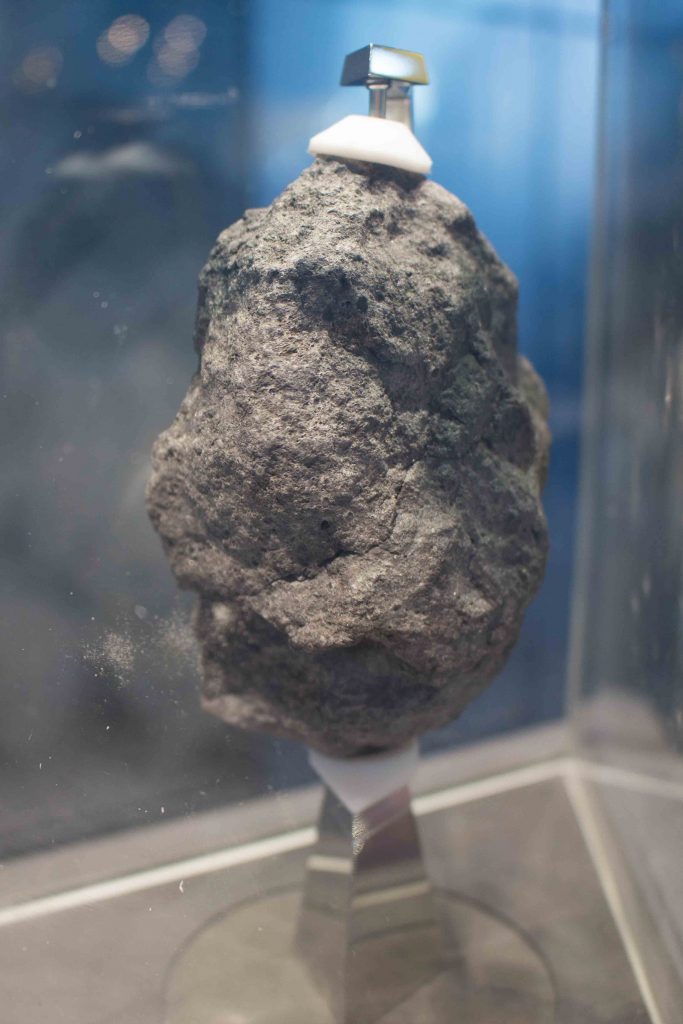 Tickets are a bit pricey, not gonna lie. But here’s how they make it worth it: once you’re in, pretty much everything is included. Guided tours of exhibits, rides, simulators, interactive experiences. The only things that aren’t are the IMAX movies, and you can add those on for relatively cheap entrance fees. There’s even a rock climbing wall, for goodness sake! I can’t remember what that had to do with space at the moment – maybe training? But it was cool, that’s for sure.

I went on a weekday afternoon and felt like I had the place to myself. Apart from a couple school groups I saw more employees than guests. So if you can swing it, skip the weekend crowds in favor of weekdays. That way you can ride the rides by yourself without waiting in line! 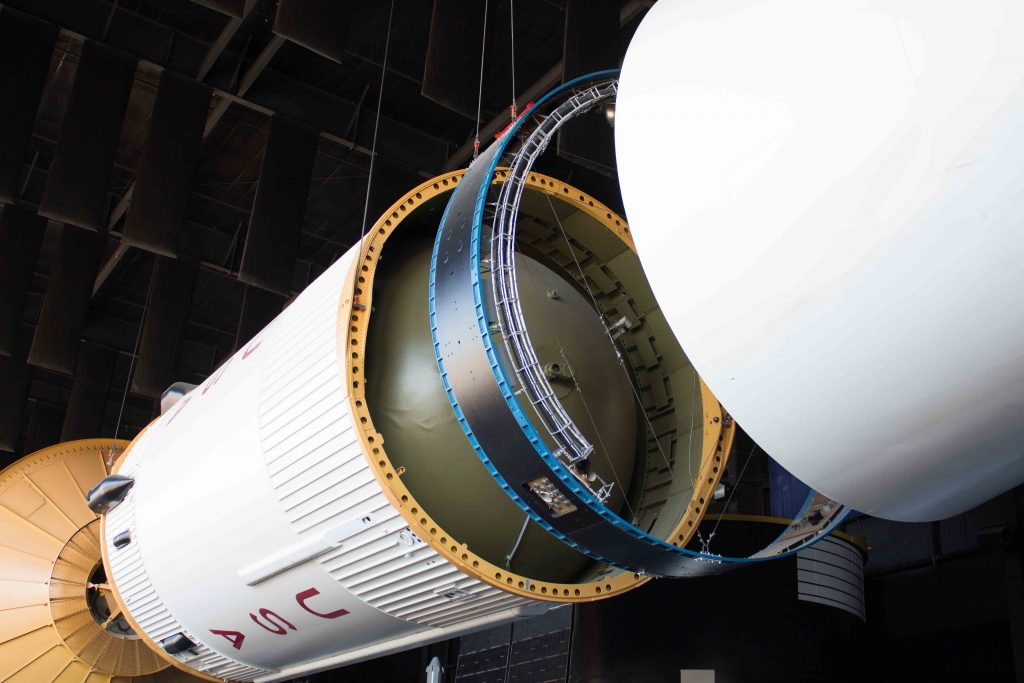 Huntsville, you’ve done it again. The Space & Rocket Center is not to be missed, even for those of us who don’t get into space science that much. It’s fantastic. It’s so interactive that any age can engage, and simple enough for anyone to understand without feeling dumbed-down. Definitely go check it out!

Check back soon for some restaurant suggestions in Huntsville!