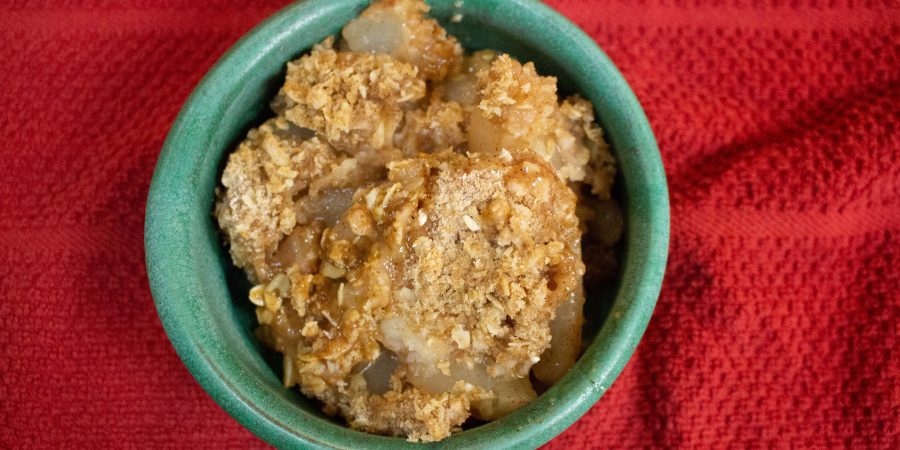 Pear crisp is one of those perfect desserts that has that warmed spiced taste of the holidays without calling for too much effort!

My husband loves pears. There are always a few in the fridge because he’s one of those weirdos who has the self-control to eat a pear instead of ice cream for dessert (sometimes).

So when his family came to visit us recently, I decided to make a pear crisp!

Think of pear crisp as the cooler, more mature cousin of apple crisp. Pears swap apple’s tangy note with a more mellow flavor that’s equally rich. The cinnamon also plays differently here with the fruit, and I LOVE it.

There are also some great pears in season during the late fall and winter, so they’re a great choice for Christmas desserts.

A bonus: the ingredients are simple basics. You probably already have everything to make the topping in your pantry!

If you’re prepping this for a holiday meal, you can either make it the day ahead and serve room temperature, or put it in the oven right as you sit down to the meal. My preference is serving hot, so I do the latter. But it’s a delicious bite either way!

Another bonus of this dish is that it’s so easy! So if you’ve got a last minute holiday party that you have no idea what to bring, do this. The longest part is peeling the pears – just dump, top, and bake!

What desserts are you cooking up for the holidays??