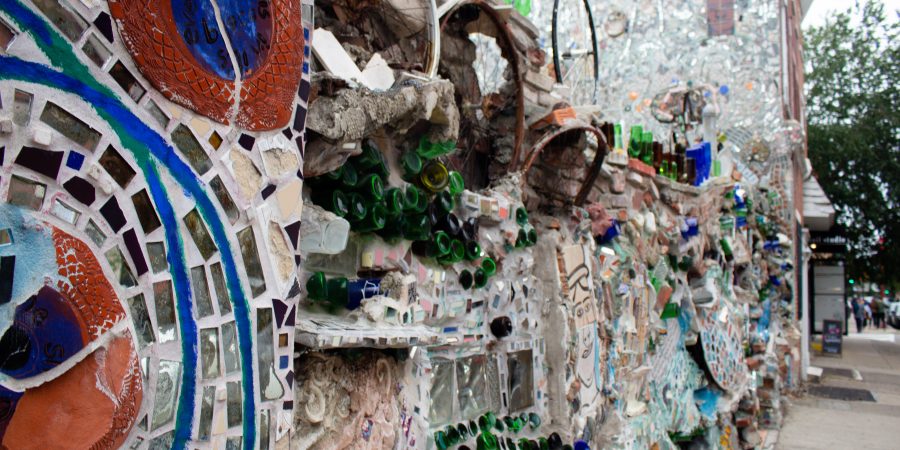 Philly is SUCH a fun city to explore! Whether on your own or with friends, there are so many things to do in a weekend in Philadelphia. Here are a few of my favorites!

I’ll be honest, spending a weekend in Philadelphia surprised me. I was excited to see some of the historic sites like the liberty bell and spot the founding fathers agreed on the declaration of independence, but I also really loved the city itself.

One reason was its walkability. It’s a major city, but you can still walk from neighborhood to neighborhood relatively easily. Exploring the city solo gave me free reign to walk everywhere, so I crisscrossed the city all weekend! I racked up about 30,000 steps in one day according to my Fitbit – that might be a record for me.

Another fabulous thing about Philadelphia is how green it is. When compared to other cities, there were tons of small parks studded throughout the city and many museums were surrounded by gardens or parks. Plus, if you’ve got a car to explore Fairmount Park, it doesn’t feel like a city at all!

It also merits saying that people were super friendly. Locals – including those whose livelihoods didn’t depend on being nice to tourists – asked me if I was lost, or gave me restaurant recommendations if we struck up a conversation.

So here’s a few must-do’s for a weekend in Philadelphia!

Things to do in Philadelphia

so many historic sights and museums here that I did a post entirely dedicated to it. I set it up to see everything in a day if you’re interested, but you could spread everything out over the entire weekend if you’d rather.

So check that out, then come back here to plan the rest of your weekend!

You’ll immediately recognize this as the Rocky steps! Take a photo or two on the steps and run up them if you’re feeling energetic. When I visited, I happened to be with not one but TWO  so lots of jokes were made.

I’ll admit I’m a sucker for art museums, but this one is definitely worth your time. First of all, tickets to the Philadelphia Museum of Art get you a lot of bang for your buck: tickets get you two days of entry into this museum as well as the  Building, Rodin Museum, and two historic homes, so you could take a whole weekend soaking in some fantastic art.

The Philadelphia Museum of Art itself is set up to offer something for everyone. There are European classics and impressionists (always one of my favorites), and a ton of American art in a variety of mediums. Whole rooms hold antique American furniture, and there’s a Tiffany mosaic column that’s a set with one in NYC’s Metropolitan Museum of Art.

My favorite exhibit was the museum’s wing of Asian art. Much of their art took the form of buildings, carefully deconstructed and moved halfway across the world to Pennsylvania. They’re beautiful and almost haunting, transporting you back hundreds (or thousands) of years to a culture completely different than my own. I loved it!

Seriously, this could take all day. But if you aren’t an all-day-at-a-museum kind of person, slot about 3 hours here and start with your favorites. And be sure to check their temporary exhibitions: they’re known for spectacular limited runs.

Let’s all say it: this sounds like a weird thing to visit as a tourist. I almost didn’t go, but when I chatted with a local friend, she told me this was hands down her favorite museum/attraction in the city. So off I went!

The Eastern State Penitentiary is famous for being the first “penitentiary” in the world. Based on a philosophy of creating a setting where inmates were encouraged to recognize the error of their ways and repent, they were given drastically different living conditions than the average jail of the time (chaotic rooms with petty thieves and murderers living shoulder to shoulder, doing time until released).

However well-intentioned, the solitary nature of the philosophy ended up failing to make the desired difference. But it offers a fascinating view of the history of the prison system and does a good job representing current issues facing prisons today.

Contrary to what you may think, the museum is neither depressing nor scary. I learned a lot and really enjoyed my visit, and there’s a great audio tour included with your entry. It goes into detail of small vignettes of life here, like the prison dog and Al Capone’s stay here. It’s also fascinating to see the way the architecture has deteriorated and changed over time.

If you haven’t had enough historical things to do in Philadelphia, there’s a whole area just outside of town with beautiful historic homes!

The most well recognized of Fairmount Park is Strawberry Mansion, built in 1783. Others to check out (or drive by) are Lauren Hill, Mount Pleasant, and Woodford.

If you’re in the area in the evening, Boathouse Row. It’s a section of crew team boathouses, some 150 years old and home to some historic rowing teams and events. At night, they’re lit up in the cutest/most romantic way, and merit a walk or drive by if you can!

I don’t really know what to say about this, other than it’s a unique feel. Very and fun to explore!

For this one, do yourself a favor and book this in advance!! It fills up and the timed entry often runs 3 hours after you show up. Even if you try the night before to book, it lets you plan your day around it.

Like so many other parts of Philadelphia, City Hall is crazy historic. You can tour it during business if you book in advance! The outside is striking on its own, so if you’ve only got a weekend in Philadelphia you still a good experience.

Rittenhouse Square is also a fun local spot to explore. It’s a beautiful green space with lots of sculptures in place. If you can, go on Saturday morning for their farmer’s market!

There are so many ways to spend a weekend in Philadelphia! I loved my long weekend in the city. What’s on your must-do list for the city of brotherly love?

I’m thinking of doing a restaurant round up for Philadelphia – would you be interested in that? Let me know in the comments and I can put one together!!

10 thoughts on “A weekend in Philadelphia”