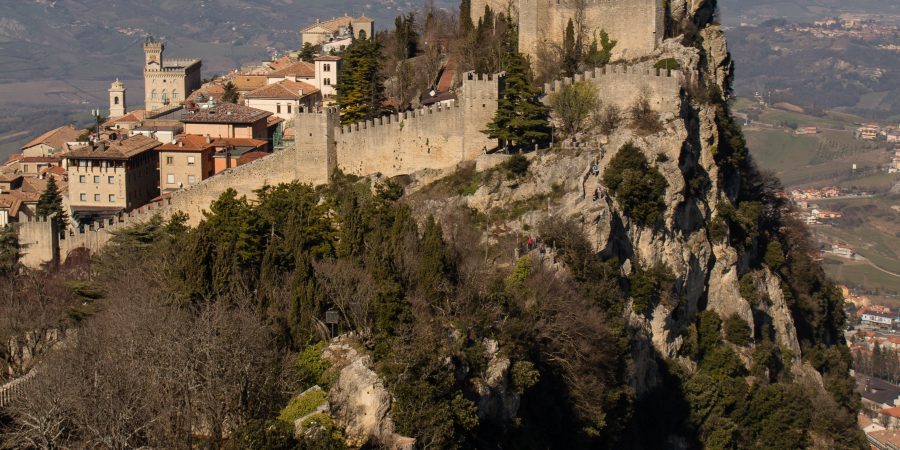 Here’s everything you need to know to plan your visit to San Marino!

Did you know there are two countries completely enclosed within Italy’s borders? Vatican City is one, and the other is San Marino! San Marino is the third smallest country in the world and completely surrounded by Italy.

San Marino has much of the character of a classic Italian city with fewer crowds and a unique fortress feel to the entire city. I’m not kidding, I felt like I was on the set for Game of Thrones or Lord of the Rings the entire weekend! Seriously, it’s a shock that no one has filmed a movie here.

While it’s not a well-known tourist destination to Americans, it’s an easy jaunt over from Florence. Those that do visit tend to take day trips through tour groups. If you’re in a hurry, these are a fine way to dip your toes into San Marino. But I highly recommend spending a night or a weekend in the capital to really get a feel for the place.

If there’s a city card, you know I’ll sniff it out. 😉 Similar to the Bolzano’s card, the San Marino card is free when staying in many of the local hotels. It gets you discounted parking and tickets into all the city-owned attractions and museums. Everything I share here is either free or discounted with the San Marino card.

San Marino is most known for its three towers that make up its skyline. Its capital city (also called San Marino) sits atop Mount Titano, where the ancient fortress had a ridiculous vantage point over the surrounding countryside. The country loves its towers – they show up in the crest, the flag, drawn on buildings, built into statues, everywhere. If you do one thing in San Marino, see the towers!

You can see the grounds and the outer portions of each without paying to enter. However, to go inside each tower you have to pay. We opted to buy the multi-ticket, which got us into the towers as well as several museums in the city.

Fun fact: you can take your pets in these! Several of the employees were surprised by the size of Wedge and one gave me a hard time about bringing a 100-pound dog into a museum with antiques hundreds of years old, but he rules made it clear he could be there! Unfortunately, it required him to wear his muzzle, which he hates, but it was nice to be able to keep him with us instead of dropping him at the hotel to do the museums. I normally stood still in the center of the room with Wedge and let Logan look, then we switched. Let’s not push it, right? 😉

You can see all three towers in a morning without rushing, so I get why people don’t feel the need to stay overnight. But there’s way more to see in the city and I loved the slower pace we had while we explored.

My suggestion is if it’s summer, start early and do the first tower first to see the busiest area early. If it’s not, it’s nice to go backwards because they get more impressive as you go and you end up in the city center to grab lunch!

The first tower is also the most iconic. Walking up the steps to the tower itself transports you back in time. The whole place hasn’t been remodeled or Disney-fied in any way – the paths are the same ones that soldiers and watchmen used. It’s a truly stunning walk up to the tower, and as you do it, look back for some equally gorgeous views.

No views are complete without climbing all the way up the tower! This one involves several flights of stairs before climbing up a ladder through a trapdoor, reminding you that this once was truly a fortress defending a kingdom.

There’s also brief museum detailing how the fortress building was used, and a small chapel near the entrance to the tower area (where they check tickets).

The second tower sits on the highest peak of Mount Titano (the mountain that San Marino sits on). This one might have the best views because you get a beautiful look at Torre Guaita. The entire place is just so epic!

Torre Cesta houses their Museum of Medieval Weapons, a collection of the ancient city’s arsenal. While I’m not super interested in weapons, it was interesting to see what kinds of things San Marino guards carried over the years. There were also some hilariously strange ones, like the double-barreled pistol that pointed in two different directions! Talk about covering all angles.

The third tower has the least to see because you can’t go inside. Torre Montale served as a lookout point and occasional prison. We spent a few minutes wandering the grounds to find the former underground entrance! I suspect it’s now covered by the electrical system, but either way, it’s not open to the public.

Exploring the city of San Marino

Our multi-museum pass got us into several city museums. Since we had two full days, we decided to see as many as possible!

My favorite was the Palazzo Pubblico, or Public Palace. It sits in the Piazza della Liberta, one of the main piazzas of the city and possibly the most picturesque. The Palazzo Pubblico is both the city and national seat of government, housing their legislature. It’s a beautiful building that has a lot of Italian influence with less of the glitz we tend to associate with classic Italian style. There’s also a bust of Abraham Lincoln on one wall, made an honorary citizen by the people of San Marino during his lifetime.

If you’re craving more art and artifacts, head to the Museo di Stato, or State Museum. If you’re like my husband, at this point you’re having some art fatigue, so feel free to cruise through. It’s nothing crazy but they have some cool coins and artifacts from other nations. I especially liked the collection of tiny Egyptian statues. You can also get a general sense of the country’s history here.

The Chiesa di San Francesco is the oldest building in the city and worth poking your head in. It’s nothing crazy, not the most ornate of buildings, but it gives a sense of the unassuming nature of the entire country.

The city has a bunch of other museums, most gimmicky and not worth your time. Top of mind are the Vampire Museum, Museum of Torture, and wax museum.

Sitting atop a steep mountain, you’d better believe there’s good hiking. The Sentiero della Rupa, or cliff walk, cuts a trail across the steeper side of Mount Titano. We did the hike with our dog and while we could all handle it, the English translation of “walk” doesn’t quite convey how strenuous it is.

But if you don’t mind heights, it’s a gorgeous way to experience a different part of the city. The trail takes you from one end of the city to the other via a trail cut into the rock of the steep side of the mountain. You get a real sense of just how defensible the place was; it makes sense that it was able to retain its independence through the centuries. We mostly had the trail to ourselves and only saw a few local runners on the 2.5-mile route.

To find the trail, head to the Porta della Rupe and follow the red and white signs for Sentiero della Rupe – it’ll take you all the way around to just past Torre Montale.

Even if hiking isn’t your cup of tea, be prepared for pretty intense walking. Everywhere involves stairs or steep uphill walks. But that means more pasta for dinner, right?

Because no trip is complete without great food, I also put together some of my favorite places to eat as well as how to choose where to stay in San Marino!

If you want behind the scenes looks at life in Italy and members-only tips, join my email list below! No spam, just funny stories and useful advice.