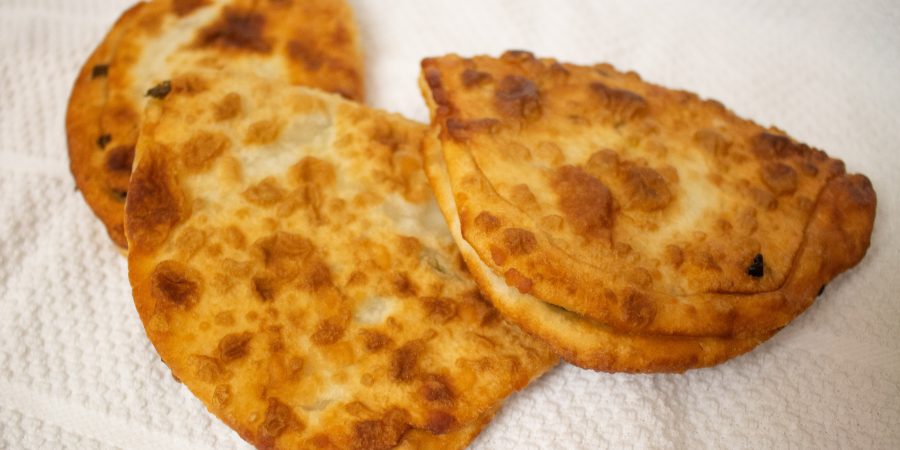 Scallion pancakes are the Chinese bread you didn’t know you were missing!

First gifts in relationships are always tricky. When my husband and I celebrated our first Christmas together, there was much gnashing of teeth (on both sides) over getting just the right gift. I have no memory of what I got Logan, but he won major points by getting me Mark Bittman’s Best Recipes in the World.

We’ve given each other lots of gifts since then, but that cookbook remains one of my favorites. We’ve had tons of great food from it, and Bittman writes in a way that makes it easy for me to replicate dishes I’ve never had before!

So when we decided to have a Chinese Christmas Eve dinner in, I immediately grabbed this cookbook. Beyond some of our favorite Chinese food staples, I wanted to attempt something I’d never had: scallion pancakes. I’d heard them referenced in The Tea Girl of Hummingbird Lane and wanted to try them.

Scallion pancakes are a bit like a Chinese version of a fried flatbread: chewy and a bit , but not overwhelmingly so. They remind me a bit of a slightly denser version of naan. They’re a perfect compliment to the big flavors you love in a Chinese meal, almost acting as a palate cleanser on their own.

They beg to be dipped in something delicious. I especially liked them with ginger scallion dipping sauce, but they’re also fantastic with dumpling dipping sauce too. Make both and do a taste test of your own, and let me know which you like better!

They’re not complicated to make, mostly needing time. If you’re serving a group, cut the finished pancakes into triangles, but when it’s just the two of us we’ll eat them as is.

I also like scallion pancakes alongside Chinese corn soup – gives you a bread-like thing to balance the meal.

You can do this without a food processor if you don’t have one: just work the flour with forks, adding a little water at a time until it sticks to itself in a ball.
Lard is the traditional frying choice here, but corn oil works great. Plus if you’re cooking other Chinese dishes you probably already have some, and it allows these to be vegan. Additionally, the scallion doesn’t have to be sliced perfectly, just in tiny bits. 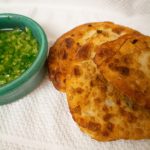 Scallion pancakes are lovely fresh from the pan and offer a chewy counterpoint to a big Chinese meal!