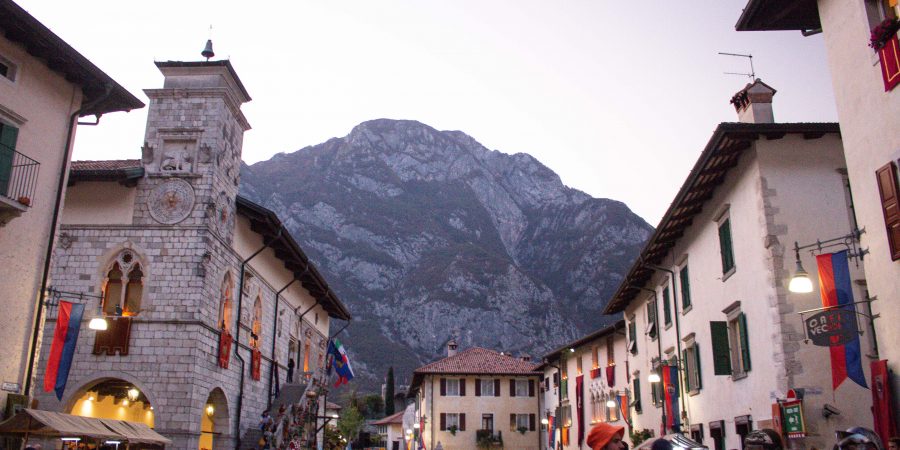 The Venzone Pumpkin Festival is the best place to spend a crisp October weekend in Italy!

Fall just isn’t complete without pumpkins, and Venzone is the best place to get into the season! And best of all, Venzone combines autumn fun with a medieval festival! Last weekend my husband, a friend, and I hopped on the train to check out the Venzone pumpkin festival for the day.

Arguably the biggest pumpkin event in the region, Venzone hosts the Festa della Zucca or Pumpkin Festival every October. For a weekend, this small walled city is transported back in time 800 years to the middle ages.

Whether you love Renaissance festivals or think they’re ridiculous, I will say that they’re made 1000% when set in a town clearly built in the middle ages. The town is celebrating actual history, which makes it so much more fun!

There’s a reason Venzone hosts a pumpkin festival: in the local dialect, people from the town are sometimes referred to as “pumpkin heads!” There’s a hilarious legend behind why, involving a craftsman who was stiffed on his payment so he secretly replaced his golden handiwork topping the town cathredral with a pumpkin, giving him to leave town before the switch was realized.

While I never heard this story told at the festival itself, it makes for a great backdrop of why the town has become the best regional pumpkin festival.

Most important, as usual: the food! The Venzone pumpkin festival has roughly five official taverns, which are pop up restaurants tucked into courtyards and communal gardens. You can get pumpkin gnocchi, pumpkin , and pumpkin desserts. Notice a theme? They all serve the same food options, so don’t sweat too much which one you end up visiting. I loved the pumpkin gnocchi, perfectly light and topped with a buttery sage sauce.

If they’re crazy crowded, you can also keep looking – lots of other restaurants and cafes offer the exact same menu in smaller spaces. The official taverns are bigger with more seating, giving you a good place to start.

By the way, is a delicacy local to our area: think small pieces of potato and cheese combined, flattened into a pancake, and then grilled. It’s delicious and filling and crazy rich.

It’s a small city, so you can slowly make your way through the entire thing in a few hours. The roads are packed with artist stands selling anything from wooden swords and shields to leatherworkers who will custom size a belt for you while you watch! I definitely knocked out some birthday gift shopping while browsing, and might have picked up a few pairs of earrings myself as well.

As you explore, keep your eyes out for street performers. With everything from minstrels to jesters wandering the streets, it’s not hard to get into the spirit of a medieval festival! Everyone working the event is dressed in costume, even down to the witch guarding the stage door. you think twice before crossing her, for sure!

Venzone takes advantage of the town’s layout to spread entertainment: a massive stage sits in the piazza for musicians and performers, while a children’s play runs every few hours set in the ruins of an ancient church. We’d pass through the main square every hour or so to hear the next group, and at one point caught a bellydancer who balanced a sword on her head as she danced!

For us Americans, it’s worth noting: pumpkin beer is not really a thing in Italy. They don’t do beer “flavors” the way we do, so most of the taverns simply serve one type of beer and one each of red and white wine. But they clearly know their audience, because one restaurant did serve flavored beers: Pizzeria Dal Cavaliere Nero had both pumpkin and elderflower beer! The guys got pumpkin so naturally, I had to try the elderflower option. It was deliciously smooth with the tiniest floral hints.

The two day festival is packed with performers, feasts, and pumpkin contests. We attended on Saturday, which has more wandering performers and musicians. Sunday is the day to see the pumpkin awards, the appointing of the Pumpkin Archduke, and a torchlit closing ceremony!

The town itself is packed with gorgeous stone buildings and a walking trail skirting the inside of the city wall, making it a great city to explore year round. But if you find yourself in Italy on the fourth weekend of October, head up to Venzone for the pumpkin festival!

Want more fun in Italy? Check out my Italy page for travel tips and inspiration!

1 thought on “Fall in the Middle Ages: the Venzone Pumpkin Festival”