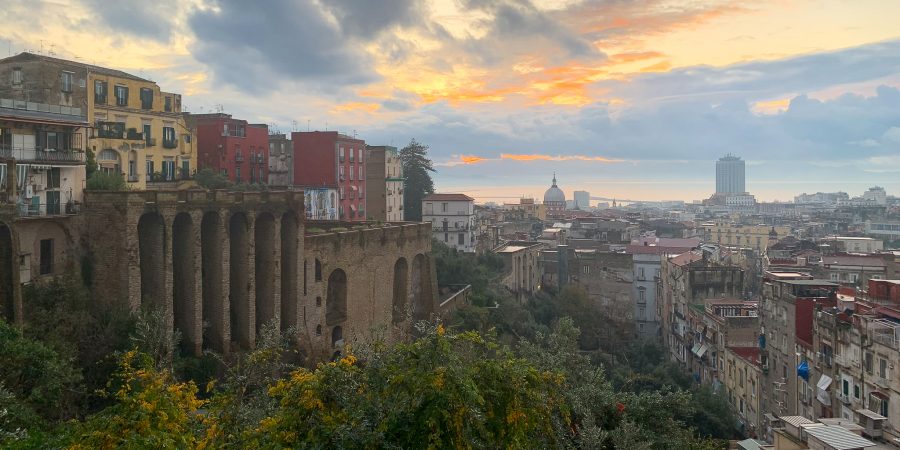 Naples is a ridiculously fun, historic, and delicious place to visit! Here are some ideas for a few days in the city.

Naples tends to get the short end of the tourism stick in southern Italy, especially considering how many people pass through Naples to get to the Amalfi Coast. Between trying to maximize beach time and the sheer volume of time and coordination it takes to actually get out there, Naples usually gets overlooked.

But Naples has so much to offer! A unique history, access to incredible archaeology, and fantastic food. Plus, it’s significantly cheaper than your average major European city.

Even if you only have one or two days in the city, I’ve put together some great ideas for what to do, see and eat in the city!

In Defense of Naples

Before we get started, a quick TED talk. Many Americans I chat with don’t like Naples. It’s dirty and driving in the city is a nightmare.

Some of that is true. Naples is gritty. And sometimes Western tourists don’t want to see grunge that on their grand vacation. After the glories of wandering the streets of Rome and Florence, Naples can feel like a turnoff.

But here’s the reality: real people live here. Naples’ local residents are very integrated into its touristy areas, so there’s laundry in the windows and people loitering at the market stalls. Italians leave their trash on the streets for pickup, but it looks gross to Americans who may not be used that. But New York City is dirty too, and many of us still love it.

My hope in saying this on the front end is to prepare you to not expect it to be something it’s not. It has that worn-down beauty that you catch glimpses of in Venice, pointing to its former glory that it still peeks through in spite of the city’s age.

And if you want to eat at the oldest Neapolitan pizza place or explored the famous Via San Gregorio Armeno, it’s the price you pay.

Okay, soapbox over. I always want y’all to feel like you’re going into a place I’m sharing with eyes open. Just wanted to acknowledge that. I love Naples and it was top on both Logan and my travel in Italy list since we moved here.

Like so many great old cities, it’s best explored on foot. As I mentioned, driving is scary here. My advice? Skip it. The good news is that they have a good metro system if you need to schlep bags to your Airbnb.

The historic city center is a great place to start: walk around, get a feel for the city. These roads are the same ones that Greeks used over 2500 years ago. The architecture shares many similarities to other classic Italian cities, but with its own spin pointing Naples’ unique history as a powerful nation-state before Italy’s unification.

My absolute favorite thing in Naples is Via San Gregorio Armeno, also known as the nativity street! Naples creates these intricate nativity scenes. You can see them throughout Italy, but they’re originally from here. If you’ve got the room in your suitcase, you can buy massive scenes and build them out, choosing each individual character and animals.

Character images aren’t limited to Bible times, either – over the years they’ve expanded selection to include bakers, butchers, pizza-makers, and all kinds of random people or scenes! They make for a cute little souvenir even if you don’t buy an entire kit.

Bonus: in November and December, they build out a Christmas market around it! But the nativity scenes are here year round.

It’s also pretty easy to find great, affordable Airbnbs. This is me, harvesting lemons from our Airbnb’s trees for the best lemon juice I’ve ever tasted!

When you’re in Naples, you have to eat pizza!

Neapolitan pizza is arguably the father of pizza as we know it. Every culture in the world has had some form of flatbread with stuff on it, I know. But modern pizza has its root here.

With that in mind, it’s worth trying to get into one of the oldest pizzerias in the city, L’Antica Pizzeria Da Michele. I say “one of” because there’s much contention over that fact, but Da Michele has been serving pizza since 1870. Let’s just say that they’ve lasted that long for a reason! When you walk in, they’ll point to a menu on the wall with three drink options and four pizzas. That’s it. We got one margarita and one cosacca, an older Napoli traditional pizza that uses parmesan instead of mozzarella. They showed up on our table in five minutes and we devoured them! The crust is a bit thicker than New York pizza, but not by much, and perfectly wood-fired in less than five minutes.

One note: in tourist season, it’s not unusual to wait two hours for a table. You may have better luck for lunch over dinner, and they allow takeaway but you still have to wait. But it’s truly delicious pizza and so worth it!

If you don’t want to wait two hours, a local favorite is Pizzeria Starita a Marterdei. Starita serves amazing wood-fired Neapolitan pizzas as well, with a larger menu and a few more things If you’re full of pizza already.

Another Neapolitan thing is pizza fritta, or fried pizza. I know it sounds weird, but it was DELICIOUS. The dough is lightly fried, then topped with marinara and toppings and baked. It’s shockingly light and not at all greasy. If you want to try something new, get pizza fritta!

Every kid studied Pompeii in school, so understandably it’s a major destination. Pompeii is amazing and merits its own rundown, so I’ll share more about it specifically soon.

Near Pompeii is Herculaneum (Ercolano in Italian), another city buried in the same eruption of Vesuvius. It’s also worth checking out, and much smaller if you fear archaeology fatigue!

More Things to Do In Naples

I’ve been to Naples twice, but still feel like I’ve only scratched the surface of what there is to in the city. So here are a few suggestions that are on my Naples bucket list!

These highlights of Naples are sure to make you fall in love with the city! If you’re down here, consider also heading to Pompeii or the Amalfi Coast!