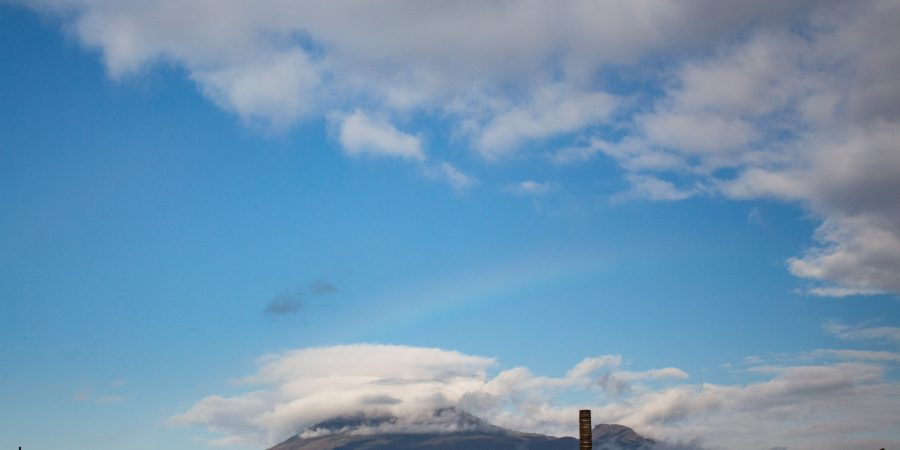 If you plan a trip to any part of southern Italy, set aside a day for to visit Pompeii!

If you head to Naples and the Amalfi Coast, I highly recommend setting some time aside to explore Pompeii!

Pompeii is the famous city at the base of Mount Vesuvius that was almost completely buried in ash during a sudden eruption in 79 AD. The result is a preserved Roman city unlike anything else we have in the modern era. The walls still have paint on them – that’s how sealed in the structures were. For some of us (myself included), it may be the closes we get to seeing archaeology in action. And it’s truly fascinating.

As a kid, I remember studying Pompeii in school and being absolutely fascinated. An entire city trapped in time, as though preserved in amber. Part of the reason the area is so intact is that the city was forgotten for centuries. It was rediscovered in the 16th century by an archaeologist following an ancient aqueduct.

There is just something to that feeling of seeing something you’ve only read about. Setting foot in a place I’d thought about since I was a kid. I’ve felt it several times in Italy – pulling into a parking spot to find the Colosseum looming above and walking into the empty piazza holding the tower of Pisa come to mind in particular. This one tapped into the nerdy side of me.

Pompeii was a bustling city, complete with paved streets and an amphitheater. Roads are paved with large stones, complete with wheel grooves carved into them from constant use. They also had raised stones serving as a crosswalk to keep feet out of the muck or rain running along the road. These crosswalks were still wide enough apart to allow horses and cart wheels to pass through unobstructed.

On the public streets near the amphitheater, businesses had stone basins behind their counter to store food served as concessions for the performances. Wells dot the gathering places, and ancient pipes that carried water through the city are still visible.

One of the most famous buildings is the public baths, where you can find frescoes on the intricately carved ceilings. You can find versions of modern spa amenities: pools of different temperatures, heated floors, and lockers to keep your stuff.

For the adults on the tour, the entire place is like a game of “spot the phallic symbol.” They are everywhere – in paintings, on sculptures, and even carved into the paving stones. In Roman culture, phallic symbols were supposed to mean everything from strength and protection. Still others may be simply pointing directions to the nearest brothel.

Speaking of, one of the best-known buildings in Pompeii is the brothel, which you can still go into. Each room is small, with a permanent bed structure built into the wall (again, so small! Clearly not much snuggling to be found here). Above each doorway is a graphic painting. Historians have speculated that the designs indicated what type of sex a person wanted, a specific to visit, or maybe just a designation of room “number.” Who knows.

Much of the pottery and artifacts sit on display in one large piazza. You can also see the plaster casts of bodies. That part is jarring – we can celebrate the knowledge that Pompeii provides us two thousand years later, but it was still a national disaster where people died horrible deaths. It’s sobering and fascinating.

There are tons of other buildings you can explore: restaurants, homes, businesses, and more. The whole experience is simultaneously fascinating and a bit eerie. It’s so easy to picture people living and working here, just doing their day to day thing. You can make out ovens in kitchens, mosaics on the floors of nicer homes, and truly gorgeous architecture.

Guided Tour vs. Exploring On Your Own

We did a pre-arranged guided tour of the city through a third party. Our guide was knowledgable and gave us plenty of time for questions. The only downside was that my nerdy self could have spent all day wandering through here but our tour moved through in about two hours.

If you don’t want to do crazy amounts of research into tour guides beforehand, pay your entry into the park and then find a guide inside the park. These are better quality guides, and it’s fine to chat with them for a few minutes to see if you feel good about them before paying them. There are tons of buildings to explore within the city, and doing a guided tour was really helpful.

The park sells an audioguide, but I’ve yet to read or hear anything positive about it. I would go with a tour group if possible.

How to Get To Pompeii

We did a day trip that included spending the morning at Pompeii and driving the Amalfi Coast during the afternoon. If you’re in a rush or visiting in the winter, this is a good way to get a quick taste of Amalfi without having time to dedicate a few days to staying in the myriad beautiful coastal towns. It was a great way to squeeze it all in, but if you can manage, give a few days to the Amalfi Coast. It’ll be worth it.

All of that to say: we had a driver drop us off, making transportation simple.

If you’re doing it yourself, the cheapest way is to take the Circumvesuviana bus and get off at the Pompeii Scavi – Villa dei Misteri stop. There’s another stop named Pompei, which leads to a modern city with the same name. Don’t stop there. This bus goes through to Sorrento and stops at Herulaneum as well if those are also on your list!

When planning your visit, I would set aside at least two hours inside. If you’re especially into Roman Empire history, you can spend most of a day here without breaking a sweat. You’ll be on foot the entire time, so wear comfortable shoes and bring water.

If this sounds up your alley, consider also checking out Herculaneum (Ercolano in Italian). Like Pompeii, the city was coated in ash during Mount Vesuvius’ 79 AD eruption, but Herculaneum is smaller and somewhat less crowded than its more popular neighbor.

If you’re heading to Pompeii, check out Naples and the Amalfi Coast as well!

Do you like learning history while you travel? If so, you should also add Berlin, Rome, and Washington D.C. to your travel bucket list!

18 thoughts on “Planning a Visit to Pompeii”